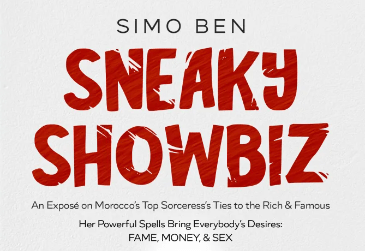 Simo Benbachir confided in the American newspaper (The American reporter) attached the full translation of the interview published in the United States of America:

Simo Ben (Simo Benbachir) is an award-winning journalist, praised and feared for his unwavering integrity and brutal honesty. The first Moroccan TV reporter to cover notable events like the Oscars and Grammy’s, Simo has a reputation as a truth-teller. This is more than evident in his recently published book: Sneaky Showbiz. I recently had the pleasure of sitting down with Simo over coffee to ask him more details about his book, and here’s what he had to say.

Q: Your book was released on November 11, 2022 in the United States. Why did you choose this specific date? Please tell us more.

A: For me, it’s a magical date. Numerology spoke to me. And a date like that doesn’t happen every day, so why not release something magic-related on such a magical day?

The Sneaky Showbiz book is an expose that sheds light on the dirty little secrets of the Moroccan show business. It shows how these celebrities use black magic to succeed and by any means necessary – especially if their success means the failure of their fellow citizens. In general, it can be observed that some Moroccans do not want to see other Moroccans succeed in life. For some, if that person is successful, it means you are not successful, and that successful person should be condemned. Unfortunately, it’s just part of our culture.

Q: A lot of people were freaked out by the cover of Sneaky Showbiz. Can you tell us more about the infamous Moroccan queen of witchcraft?

A: Her name is R’kia and she hates labels, but yes, she is the Moroccan queen of witchcraft. All walks of life come to see her for any problems they may have. But what really struck me during this mission is the considerable number of Moroccan celebrities who come to use his services.

Q: What kind of services?

Q: Wow, looks like the entertainment industry is very different from the US.

A: First of all, in Morocco and the Arab world in general, entertainment is haram – that is, prohibited by Islam, which is the main religion. So being an artist, male or female, on stage singing in front of people is a big no-no. The religion also considers all money earned from any aspect of showbiz to be haram.

That doesn’t stop people from being artists because they don’t care. They are already rebellious, and their careers go against the rules of Islam. Since they are doing this in a culture that is completely controlled by religion and the majority of the audience is religious, these people see artists as the devil. And if these artists are already judged and called names for defying the Quran and Islam by dancing and singing, what difference does it make if these artists are using something else which is also illegal or haram but widely used in culture, such as witchcraft?

Q: I have had the opportunity to read the crazy stories in this book, and many journalists who have visited your part of the world have confirmed the impact of witchcraft. But does it really work?

A: I don’t want to spoiler for the public here, but something that I found crazy is that I know a lot of Moroccan artists who perform one or two songs and end up owning apartments in skyscrapers the most expensive in Dubai – where my people do not have an immaculate reputation. Personally I think black magic is what drives these Middle Eastern CEOs and Billionaires to give millions of dollars to these young artists and models rather than other young and beautiful models around the world who don’t have no recourse to witchcraft. Some of them even make more money than some of the most famous international artists. Their fake success is a cover to justify the wealth they receive which clearly has nothing to do with entertainment.

Q: Your book is #1 in many categories on Amazon. What do you think ?

A: To be honest, I didn’t expect the book to be ranked #1 in so many categories less than a week after its launch. I’ve always wanted to export the craziness of our culture to a global audience. I’ve come to realize that most Americans don’t know these stories, so it’s gratifying to see their reaction to what took me so long to realize.

A: Besides the spells that people can cast on you, we have the evil eye, which is very powerful. So most people don’t talk about their upcoming plans for fear that someone will cast the evil eye on them and disrupt those plans or something worse. I’ll tell you about my next project when it’s out.