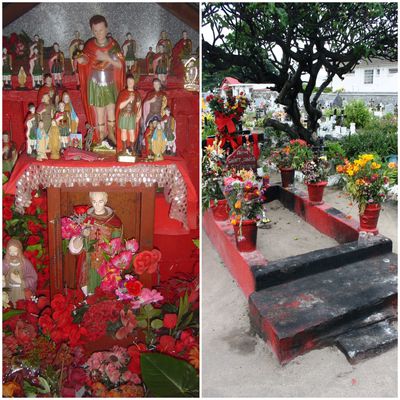 Sorcerers and healers inhabit our imagination. They say they have the ability to be a link between the world of the living and that of the Ancestors. Rituals of healing, bewitchment or magic: the Overseas archives offer you an overview of beliefs in the Overseas Territories.

On Reunion Island, the frontier of religions develop cults often described as popular and practices in which it is difficult to distinguish between religion, traditional medicine, magic and witchcraft. In this vox pop produced in 1983 by RFO Réunion, opinions are divided on the existence of witchcraft.

Like everywhere in Overseas France, in Reunion, ancient beliefs have mixed with religions from Europe or Asia.

Altar of Saint-Expédit, tomb of Sitarane in the cemetery of Saint-Pierre

One of the known figures on the island is that of Saint-Expedit. This saint, who arrived after the First World War, is cConsidered a holy avenger, he is called upon to settle accounts or to get rid of a rival. Its color, red is associated with goddess Kalideity of the Hindu pantheon, considered the force that destroys evil spirits and protects devotees.

In the cemetery of Saint-Pierre, the tomb of the famous African bandit and sorcerer Sitarane, Simicoudza Simicurba, is a place that is still the subject of black magic ceremonies, mysterious rites where some come to deposit offerings in order to cast spells on their enemies.

In Guadeloupe, Martinique and Guyana, the quimbois draws its origins from religions and various West African, Bantu, Christian rites, Amerindian and also Indian traditions. Quimbois Where Tjenbwa, Kenbwa (“Hold a drink!”), particularly designate rituals linked to witchcraft. But, according to the followers of the quimbois, what kills can also heal, in the world of the Ancestors and the Underworld, nothing is binary, everything depends on who and why one works.

Quimbois is a belief system rooted in illness and healing. It plays a role in the explanation of the disease: Why ? why me ? why now ? For the natural disease, plants and prayers will suffice, if the origin is supernatural, it is because there is an imbalance with the environment, which requires the intervention of a gadèdzafè, “he who sees”.

In 1990, the magazine “Mascarines” offered an extract from the documentary “Sorcery in Martinique” (directed by Luc de Saint-Sernin, from RFO Martinique), which at the time had impressed viewers with its power (Attention, some images may be offensive).

The border between the healer and the sorcerer is difficult to draw, from the point of view of the Christian religion, these practices come under animism and are little tolerated. However, the use of plants, the knowledge of their virtues is often in the hands of those who are called sorcerers or healers.

In the Pacific Islands, the art of healing also passes through prayers to heal what is not a physical illness, and always through the knowledge of plants. In Polynesia, the tahu’a“he who sees”, “he who knows” is endowed with this extensive knowledge, he is also granted mysterious powers in many areas.

In New Caledonia, each clan has the mastery of plants to treat, its own pharmacopoeia. The exchange of medicines between tribes is common, but the recipes remain secret. This knowledge transmitted orally and over time, coupled with a precise observation of nature, is of interest to the scientific world. There is now a respect for this knowledge specific to the traditional culture, which allows scientists from CNRSto associate traditional healers with researchers.

Watch this report by Suzel Danet, broadcast in “Mascarines”, in 1990: