Broadcast at midnight (!) September 21, 2022 on France 2, this impressive documentary may have gone unnoticed. It is, however, visible in replay on france.tv until January 29, 2023.

The directors of the remarkable Congo (cf. review #14941) persist and sign: this new opus comes as a complement and a deepening to their research in Congo-Brazzaville on traditional healing. Already in Congo, a customary court is convened to judge the apostle Médard because he is suspected of witchcraft. We find here this court which becomes the center of the film. “We are not here to defend sorcerers but to unmask them”, explains one of the judges. The cases that arise are accusations of witchcraft often brought by other members of their family by grieving families in the face of successive deaths. “There is no natural death in the Congo: families are torn apart,” commented a judge confronted with spellcasters. 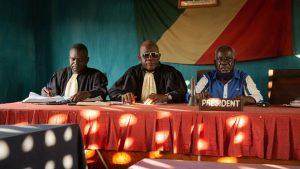 As in the case of Congo, some will think that these are endangered practices highlighted by a reductive gaze exoticizing their share of mystery to better sell this reduction to a savage Africa. Not at all. Firstly because this film also calls us to relativism and therefore not to seek to objectify the Other but on the contrary to accept him as he is without hoping to understand him, as this culture is so different. What we can understand is its relevance to the people who experience it. Because this practice comes from a history which is foreign to us but which is profound for the populations concerned. Belief plays its role of cohesion and social repair in a country where the State is lacking and where historical misdeeds (colonization, civil war, bad governance) have pushed people to seek other protections and support. 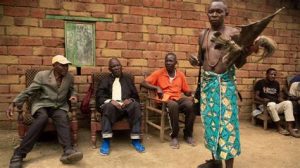 In Brazzaville, the customary court of Tenrikyo is renowned throughout the country for dealing with accusations of witchcraft. These judges are intimately familiar with human conflict and instinctively know who is lying and who is telling the truth. They do not exercise punitive justice but define themselves as conciliators, “firefighters of the cursed”, as one of them put it. The case of the “theft of an aquatic entity” (a man in love with a mermaid accuses a magician of having stolen it from him) is emblematic in this respect: confronted with a magician, the court, after consultation, calls on a seer, he “consults the invisible.” The court thus recognizes a superior force capable of guiding them. 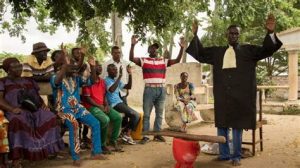 It is not the court that renders justice but the ordeal: a ritual mortar in which the accused proclaims his innocence by publicly crushing magic powder. If he lies, he risks the punishment of the spirits, more serious than that of the judges because it can lead to death. He believes in it and that makes him confess. He is then asked to pound again, swearing to renounce witchcraft. From being accused, he then becomes a member of his family again and can live in society. In the Middle Ages in Europe, the ordeal (“the judgment of God”) was a painful test allowing God to indicate if the accused was innocent, and in this case helping him to overcome this test. In fact, all religions leave it up to the supernatural to decide crime and innocence.

The directors’ project is to listen to this universe which seems irrational to us and to transmit it, without discrediting it or disqualifying it as an error, dream or illusion. They had to share their daily lives. And the judges are grateful to them: “The whites have come to make a film: may their images circulate in the world and make us famous! In short, that people from elsewhere understand that they are not idiots and that they are on the contrary helping families to solve their problems and not to kill each other. Because they are themselves confronted with devaluation in their own country, where they receive only a derisory salary whereas the judges are usually well paid. A young man advises them to communicate better: “we don’t know you, you are considered sorcerers! Should these judges use social networks? For the moment, a quality film that respects them is already not bad!

Ordalies, the tribunal of the invisible, by Hadrien La Vapeur and Corto Vaclav | africultures