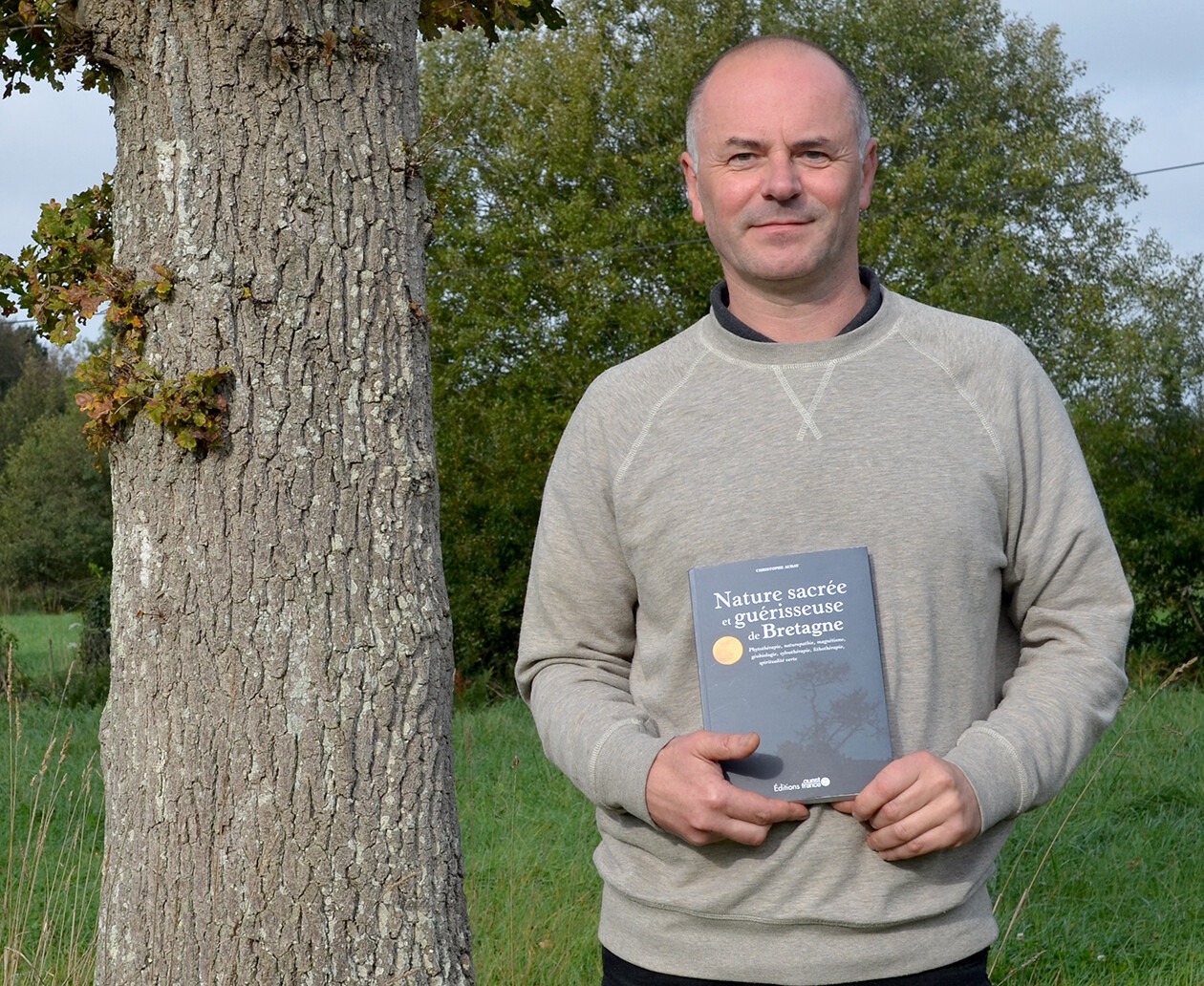 Information from the Pays de Redon
See my news

“I did my veterinary thesis on the traditional care by plants, by collecting, especially around Saint-Martin-sur-Oust “where he is from and where he still lives, explains Christophe Auray. His first explorations fascinated him to the point that he wrote another thesis in the history of science and technology. Spotted by Ouest France editions, he publishes with “Sacred and healing nature of Brittany” are eighth book.

“After the media coverage of my previous book, one of the sites mentioned received twice as many visitors, donations, candles! “says Christophe Auray. This place “is regularly frequented by a healer, a medium and a magnetizer who comes to recharge his pendulum. When TF1 contacted me to make a reporting on sacred sites [diffusé dimanche dernier au 13h], I approached those who take care of it and the town hall. The refusal was unanimous! »

Approaching a fountain, near Brocéliande, “frequented by geobiologists, I saw a group of about twenty people, all under 40, lying down for a sort of ritual”.

A sacred relationship with nature

This is the setting for Christophe Auray’s new book. “I want to show that in today’s popular culture, there remains a sacred relationship to nature, with continuity in rites around plants, stones, water”.

Christophe Auray describes the emergence of “a sort of green spirituality “, while “the Catholic religion has much less influence. But nature abhors a vacuum. And many are those who reconnect with nature, considered as a god. People are inspired by many practices, it is not a conversion as with the Catholic religion, Everyone does what he wants and joins a group that goes in the same direction, or not. Today’s individualism means that everyone creates their own life, everyone has their own quest for meaning…” Christophe Auray also notes a “return to magic and witchcraft: according to a post-Covid-19 survey, 40% of under 35 believe in witchcraft”.

Plants ? The interest shown in them is still topical. “Whether during plant festivals, through the botanical gardens that developed in the 1980s and 1990s. For example on heritage sites, abbeys, castles such as the Domaine de La Roche-Jagu in Ploëzal in the Côtes d ‘Armor, where entertainment has been offered since the 2000s around the garden of medicinal plants. It is the same in Paimpol at the abbey of Beauport. »

In another register, Christophe Auray also quotes the Peillac Autumn Fruit Festival, “where a naturopath was invited this year”. As well as Avelenn, which offers essential oils and hydrolats in Saint-Jacut-les-Pins, where a person with a degree in herbalism works.

A chapter of the book takes up the fruit of collections “on the place of nature in the magical world, which I had not yet published”, continues Christophe Auray, in the footsteps of Anatole Le Braz and his gloomy “Legends of death”: “Many women have told me that the ‘feurzai’, the barn owl, is a harbinger of death. Like dogs that start “louder”. Signs are also found in the sky. We speak of a candle which passes, coming from the place of baptism to the chimney of a dying person. More generally, “we read nature and the environment”.

Plants “with magical powers are used today in rituals, not necessarily linked to local practices. White sage is burned to purify homes. This rite comes from the American Indians. Although this plant does not grow particularly in Brittany, “it can be found very easily on the internet”.

Who says magic also says “hallucinations caused by plants”, which abound in popular traditions long before the proliferation of cannabis and in today’s “controversies” linked to “the commercialization of CBD from hemp”, with its soothing and non-hallucinatory.

It is difficult today to find one’s way in all the specialties of well-being practiced by ever more practitioners, including in our countryside. ” The magnetizersbring energy to their patients” who lack it, describes Christophe Auray. ” As to energy companies , they direct the energies of sick people. ” The naturopaths “use different techniques to restore people’s balance: food hygiene, physical activity, relaxation, hydrology, massages, breathing exercises, reflex techniques, radiation techniques, aromatherapy, herbal medicine…”

The lithotherapy assigns virtues to stones and other crystals. “There are stones placed on the altar of churches, there is a kind of religious syncretism. “Some menhirs are particularly prized: “People come to “load” stones on them or deposit them as part of rituals. »

There ” forest therapy aims to derive benefits from the energy of trees. It is a practice that comes from Japan. Studies show that trees emit molecules that can have effects on stress.

If many specialties “are not recognized by official bodies, “the movements tend to be regulated through associations of practitioners”, notes Christophe Auray. “My purpose is not to judge, I am moreover seen rather as a defender of these alternative practices. » Kindness does not mean naivety in the face of excess: “In February 2021, the government sounded the alarm because there was an explosion ofsectarian excessesaround health and wellness. The MIVILUDES website (Interministerial mission for vigilance and the fight against sectarian aberrations) lists the criteria that can make one think of a sect. »

Was this article helpful to you? Know that you can follow Les Infos du Pays de Redon in space My News . In one click, after registration, you will find all the news of your favorite cities and brands.

Harry Potter: The Saga Loses Another Iconic Cast Member!
an incoherent witch hunt (on Blu-ray and DVD)
The Secrets of Salamonis, or the secret of a masterpiece!
Tweet
Share
Share
Pin