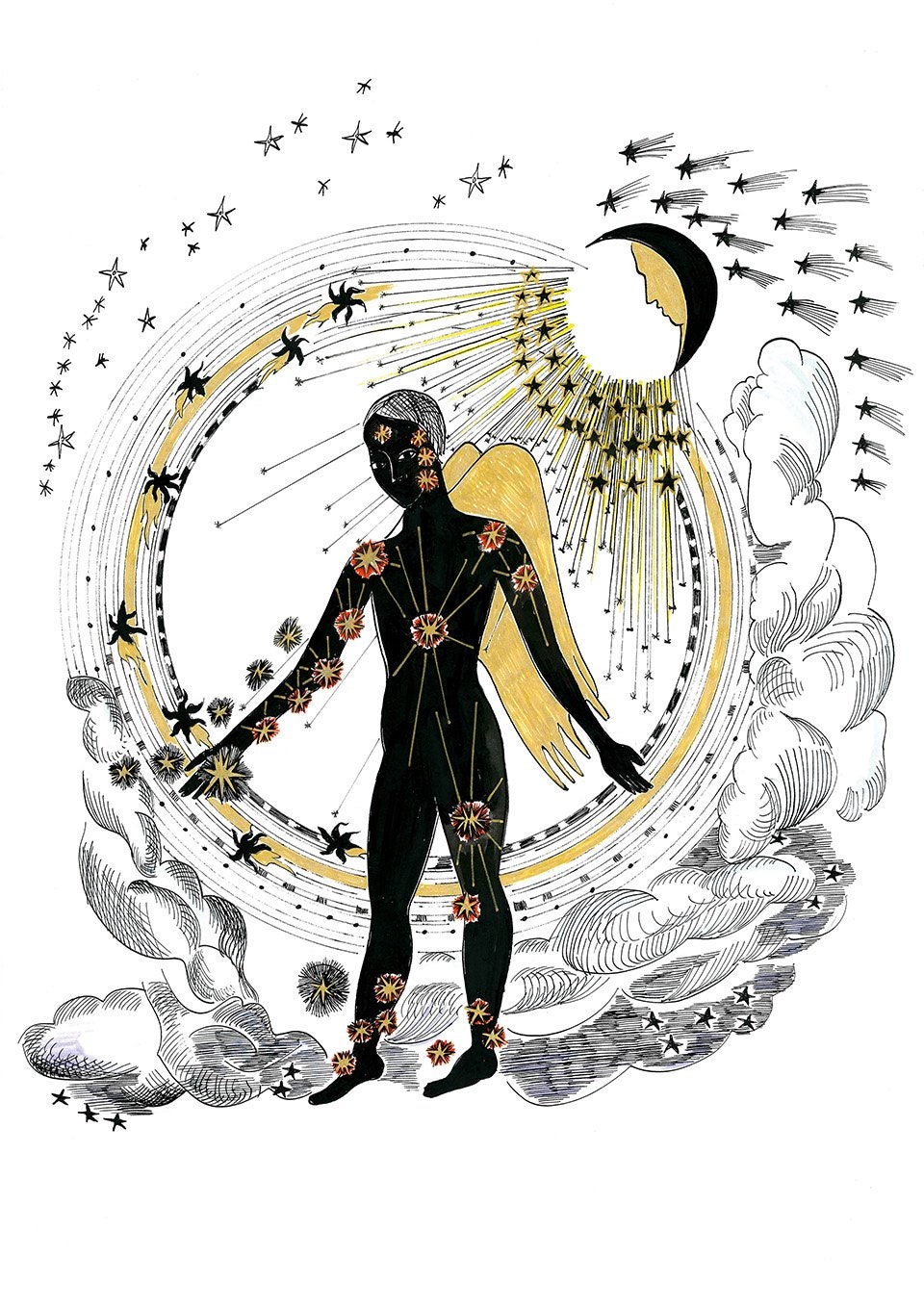 How many times have we prayed to the universe to give us magical powers? For my part, as I write these lines, probably only ten times since this morning. Snapping my fingers and seeing the linen put away alone – and ironed – in its cupboard, wave a baguette and serve a dinner worthy of the great chefs, recite an incantation and make the tension in my back disappear after years of writing bent over a computer (no, my concerns are not the most glamorous). With our friends, we have fun remaking the world. ” What would you do if you had magical powers? » has the same flavor as « What would you do if you won the lottery? as if wealth and sorcery went hand in hand. Besides, who wouldn’t try to find out the numbers for the next draw if they had the gift of divination? Is the power attributed to witches the same as that granted to billionaires?

As I zap on yet another tiktok at the end of the evening, when the day has been too long to watch a foreign series or immerse myself in this thriller that has been waiting on my bedside table since the beginning of the summer, I come across another of those posts that captivate me so much let them question me. This is a drawing of cards made by an unknown person on the web that I would certainly never come across again. Candles in one corner, magic crystals in another, dried flowers on the table, swirls of incense and a benevolent smile, she assures us that she has heard a message and that she absolutely must deliver it to the person who will fall by chance – or thanks to the application’s well-honed algorithm – on his video. The concept is fun, intriguing and even quite enjoyable. I would almost have the impression that someone is watching over me and that my future is well traced in the stars. It must be said that I am a good customer of this kind of content, being myself open to spirituality. But for the past few years, I have noticed this great boom on social networks as well as on the shelves of bookstores. The magic left the pages ofHarry Potter for real life. Our childhood fantasies, waving a piece of wood, which we had convinced ourselves was magic, took shape in our adult lives. In the movies, in our kitchens and bathrooms, in our moments of meditation, in our morning horoscopes… Witchcraft is everywhere today. This makes the skeptics smile but does not prevent the “discipline” from invading the media, cultural and commercial space. You only have to see the attraction of magic in all areas, at a time when we clearly need to dream and escape the monotony of everyday life. In beauty, we vaporize the face of waters infused with magic crystals. And on the fashion side, mysticism has made a gradual comeback and has never been so popular. I am thinking in particular of the tarot card style pendants of Sorellinaor the constellation dresses for pre-fall 2015 by Valentinopassing by the witches of the west who marched in 2012 on the catwalk of Saint Laurent by Hedi Slimane. What used to be practiced in private is today a true social phenomenon headed by the emblem of the powerful, sublime witch who is in control of her destiny. Her figure makes you dream, seduces and makes new followers every day. I deliberately use the feminine because, through its history and its characteristics, the symbolism of the witch targets this gender above all and represents for many an ideal to be achieved. This is where a question arises: is the witch today the emblem of feminism and synonymous with power? Investigation.

When she mentions the witch in her essay Sorcieres. The Undefeated Power of Women published in 2018, Mona Chollet Talk about “misunderstanding covered by the riot of fantasy, superpowered heroine imagery associated with witches in cultural productions.” It is true that even in the watered-down universe of the wizard of Hogwarts, the chosen with powers hide from the non-magical world. This does not prevent today’s adepts from talking about it on dedicated sites, even from publishing numerous books of magical practices. Rituals, pagan festivals, card draws… Whatever the refractory say, witchcraft is gaining ground at home and in bookstores. During my research, I came across the manual of witchcraft Witch, Pleasewritten by feminist journalist Taous Merakchia.k.a Jack Parker. The book is a summary of everything you need to know to tame the discipline. There is a list of the witch’s essentials, methods for writing your own grimoire or even a dictionary of symbols, useful for anyone who wants to decipher dreams, oracles or everyday signs. This knowledge, Jack Parker didn’t pull it out of a magician’s hat. Before her, very many people gave in to the exercise, bringing together age-old knowledge to perpetuate traditions – sometimes pagan – and rites which have more or less proven their effectiveness. In any case, if they do not allow a swarm of doves to appear during a magic trick, they bring a certain well-being to those who practice them. The witch leaves her evil aura behind and becomes a figure of kindness, wisdom and generosity. Her description brings us back to a more traditional vision of the healing and learned magician.

A question therefore arises: why are we afraid of witches and not of those who burn them? When I ask her about the link between feminism and witchcraft, the journalist explains: The feminist impact of this chapter of our history has repercussions on feminist struggles because witch hunts in the West were essentially weapons of the patriarchy, and it was not always about mystical beliefs but very often about women “in their place” when they dared to deviate from the path imposed on them. » Mona Chollet confirms his statements with his horrific descriptions of the fate reserved for these sinners who served as scapegoats for all of society. Even in ancient literature where we learn that many relied on omens to make decisions, the woman with magical powers posed a threat. We think of Circe and its lethal seduction which trapped the men ofUlysses by turning them into pigs, or even Astonished, a figure of feminine power and rage, capable of castrating men with a single glance. The demonization of women has led to massacres to such an extent that the female population has seen a sharp decline in some European villages, not to mention the famous Salem witch hunt. This is where feminist struggles come in waving the symbolic flag of the enchantress. Seen by some as a danger threatening society through her decadence, the magician is a figure of power who embraces her femininity and the power her gender offers her. Nothing to do with magic toad slime potions.

“Witch hunts in the West were essentially weapons of the patriarchy. It was not always about mystical beliefs but very often about putting women in their place when they dared to deviate from the path imposed on them.” Mona Chollet

However, it is exactly these practices that we have seen flourishing everywhere for several years, until being able to obtain a cauldron and magic herbs on Etsy. Fashion effect or real phenomenon that is anchored in society, Jack Parker is of the opinion that the two merge: “We are lucky to be able to find crystals at Cultura and tarots at Fnac, it has become profitable so everyone gets involved and we can practice without risking more than mockery and on the other hand, precisely because from that, it has become ultra profitable so everyone gets involved and yes, it creates a fashion effect.” However, the journalist does not blame those who launch following this popular movement. On the contrary, his vision is all the more benevolent: “The important thing is that there is a front door, and that people have gone through generational knowledge or through my book because it was at the head of the gondola at Carrefour, honestly, I don’t care. , it is the result that counts. It will surely go down at some point, but in the meantime it has allowed a lot of people to find out and potentially find something that does them good, so good.

But what is a modern witch?

With the possibility of formulating an incantation to transform my sad dish of buttery pasta into a feast worthy of a starred restaurant eliminated, I am left to understand what today’s witch really represents. Of course, she is a symbol for an obvious feminist advance, as with the American association WITCH who wants to be against patriarchal domination and white supremacy. Embodying the witch is a tribute to those who have been unjustly condemned, as much as a middle finger to misogyny. But the fact remains that the rituals and readings of the tarot are very real and anchored in the habits of many. I drop then the publication instagram of Lili Nguyennail-artist followed by 100,000 followers recognized under the very Californian name This is Venice. Spiritual to the tips of her nails, this influencer has just released her oracle published by Good Mood Dealera card game with tangy nuances to be drawn to shed light on a personal questioning.

Modern witchcraft, a fashionable practice for reconnecting with oneself