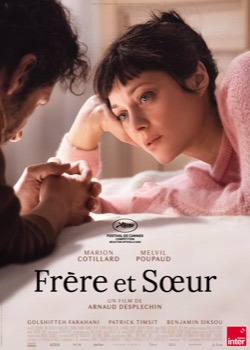 Arnaud Desplechin surprises with the amazing “Sibling” (in competition – also in theaters since May 20), the story of a pathological hatred between a sister (Marion Cotillard) and a brother (Melvil Poupaud) who avoid each other. The film then undertakes an unpredictable path, generating both dissonance and burlesque, seriousness and humor, violent reality and fantasy. The convolutions of the story made up of ruptures and breakaways give the film the appearance of a jazz score. For the real music, the filmmaker finds his faithful Gregory Hetzel – for the 7th time in the cinema since “Kings & Queens” (2004) – with an orchestral score adding tragedy, with all the same the spontaneous presence of a saxophone in full freedom. 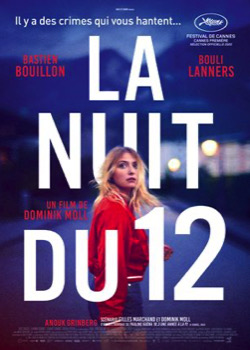 Out of competition, “Night of 12” by Dominik Moll is a unique and moving detective film. A police investigation (led by an agent of the PJ – Bastien Bouillon) to elucidate the murder of a young girl gives way to the inner demons of each witness, to invisible ghosts which bring a fantastic dimension. The composer Olivier Marguerite (appreciated last year with “Onoda”) then offers a vocal theme (for a celestial dimension) and sluggishly moving strings (for melancholy), for a score shared between the impulses of death and life, both dark and bright. In addition, we hear three 100% original songs, “ANGEL IN THE NIGHT” (Dominique Moll / Olivier Marguerit) is the song (performed by Stéphane Milochevitch) that one of the suspects sings in front of the grave of the deceased, supposed to come from a fictional band from the 80s; “CLARA”, a song in the name of the young woman who disappeared, written by one of her relations in the film, played by rapper Nathanaël Beausivoir, and finally “WHITE FLOWERS” (Shanti Masud / Olivier Marguerit), an end song performed by Mina Tindle.

“Dalvah” is a shock film at Critics’ Week. Emmanuelle Nicot films a 12-year-old girl (Zelda Samson) who is suddenly removed from her father’s home due to violence suffered. Faced with this harshness and this character closed in on himself, Frederic Alvarez (which we liked on “Louloute” by Hubert Viel) offers an aerial score playing softness to mark the young woman’s inner journey towards emancipation and which unfolds until the final trial.

Also at Critics’ Week, we find a young girl in Alma Viva by Cristèle Alves Meira. She is haunted by the spirit of her deceased grandmother, deep in the Portuguese mountains. Amine Bouhafa offers an ethereal score (strings, flute, glass harmonica) to represent the invisible part of the film linked to witchcraft. And the composer who accompanies 5 films about the festival takes into account the geographical context of each one. Here, he brings together local musicians (to form the Alma Viva Band), including some songs performed on screen.

After Portugal, Amine Bouhafa finds himself in Tunisia with the first solar film by Erige Sehiri, “Under the Figs” (Directors’ Fortnight), about women who work to harvest figs and talk about their desires, for a day under the trees. Amid the sounds of rustling leaves and birds, the refined score incorporates the harp for the bucolic dimension, playing the enchanted parenthesis during moments of rest, intervening during moments of travel, never during dialogues.

“Plan 75”, the first Japanese film by Chie Hayakawa, at ACID, is inhabited by old age and the approach of death, around the dystopian political project of logistical and financial support to end one’s life. The silence is heavy in a contemplative staging. The music of Remi Boubal then represents the new hope for the characters. The parsimonious score of strings, piano, flute, expresses a certain sweetness. The composer also performs Mozart’s Sonata No. 5 in G Major for the film.

Finally, concerning the use of pre-existing music, it can sometimes be an asset to touch feelings. Does this still require a filmmaker to know how to integrate them skilfully? And this is the case for Emmanuel Mouret (joyful “Chronicle of a temporary affair”, Cannes Première), which illustrates the romance (between a single mother – Sandrine Kiberlain – and a married man – Vincent Macaigne) oscillating between tenderness, zaniness, and tragedy, through classical tunes (Handel, Mozart, Poulenc), attributing to the context modern a dimension of another century, making a bridge with his last historical film. The filmmaker says of Mozart: “Mozart’s lightness is profound. I like the fact that these sonatas are sentimental without saying too much, that they are soft without being syrupy. They bring an even greater subtlety to the feelings of the characters”. Also, “La javanaise” by Juliette Gréco in opening and closing embraces the film.

This is also the case of Mia Hansen-Løve, on the heartbreaking “A nice morning” (Directors’ Fortnight), romance between Sandra and Clément (Léa Seydoux – at the bedside of her sick father, and Melvil Poupaud – as a couple). Thus, the piano of a Schubert sonata appears as a theme for tenuous feelings. This same sonata was associated with a donkey in “Au random Balthazar” (Robert Bresson, 1966), a film that is decidedly often quoted (with Skolimowski’s “Hi-Han”).