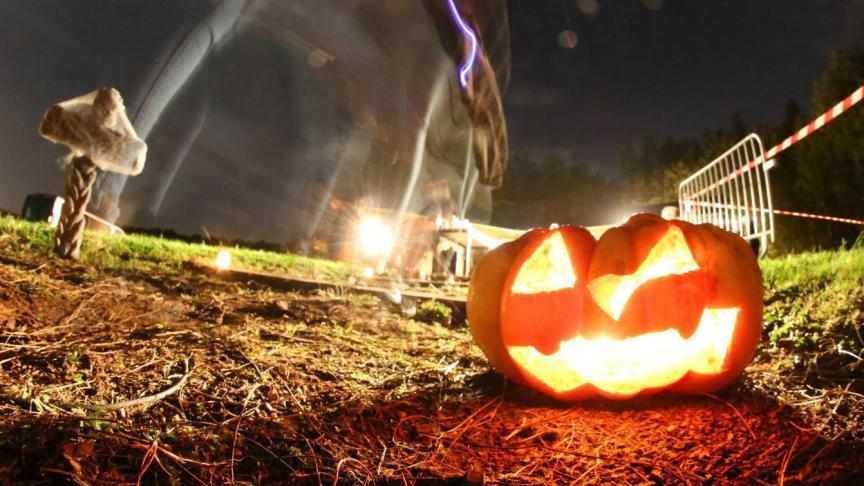 
Who’s afraid of the big bad Werewolf of London
? Because John Landis (The Blues Brothers), because the make-up, because the tone of the 1980s, and especially because “the” transformation (“ one of the most fantastic special effects scenes in cinema “) give it a cult aura, the film finds its way back to dark rooms, and will be screened Friday by the PopCorn Reborn association. ” We had never shown a monster movie, strictly speaking. “, agrees President Guillaume Méral and this one, who gave birth to a particularly prolific period, “ defends his position well. It has the charm and efficiency of that cinema, made with those means and that state of mind. »


Another day, same place with a second proposal, more contemporary, centered on the very recent trilogy of David Gordon Green whose masked killer we no longer present: Halloween, Halloween Kills, Halloween Ends (just released in theaters). Appointment October 31 to petocher in front of this marathon.

On Saturday October 29 in Arras, the Hotel de Guînes will host – from 7:30 p.m. to 1 a.m. – the “Ticket to Death” evening, with virtual reality horror games and frightening short films. Not far from there, on the same day, from 5 p.m. to 9 p.m. (and on Sundays too), the classic but effective Halloween in Les Boves will raise your body temperature and blood pressure (€9/€4.50). These activities will take place as part of the Pétoch’Week, bringing together in Arras many thematic activities around Halloween.

On Monday, October 31, an event called AdoWeen will take over the Vaudry-Fontaine park in Saint-Laurent-Blangy and its media library, throughout the afternoon and part of the evening. The two games, Monster Kids Apocalypse (under eleven years old) and Zombie Apocalypse (game for adults where you have to investigate a deadly virus…) will be provided by “Le Chemin de Traverse”, an escape game from Arras. Registration on 03 21 15 30 90 (reserved for members of the “M” network of media libraries in Arras and Saint-Laurent-Blangy). Also on October 31, in Dainville (5:30 p.m.), the Saint-Jean farm is also having its little Halloween. Haunted house, make-up and local soups – with vegetables from the Fatoux farm – on the menu!

After opening with a bang at the Manoir Marceau on Wednesday, the fun will continue this Friday 28 in Vieil-Hesdin with a Halloween parade (6:30 p.m. in the village hall, free); then the next day, a conference on witchcraft in the Middle Ages, again at the Marceau manor (5 p.m., €10), then return to the car park of the village hall for… the haunted village (7 p.m., free). the monday 31 octoberthe most revelers will go to KesWest domain, in Boursto dance in the abandoned cemetery like Michael Jackson at the time Thrillerduring the Halloween evening (free entry for people in disguise or €10.99 including drinks, from 10 p.m.). In Monchy Bretona frightening torchlight procession will start at 8:30 p.m., as part of the Fête à Marie-Grauette.

The banquet hallHermies will also be on Halloween time: Sunday, October 30 from 3 p.m. With its batch of “little monsters” in disguise, its animated Halloween tale and a parade at the stroke of 6 p.m. – activity reserved for children under eleven. October 31 at warlus (6 p.m.), there will be a candy hunt for those under ten, and a horror school for those over ten: meet in front of the multipurpose room. In Biache-Saint-Vaast on Saturday October 29, a 2 vs 2 dance battle on the theme of Halloween organized by the association of the commune Studio Calypso will be held at the Émile-Huré sports hall from 6 p.m. ( admission: €2). Participants will be divided into three categories: children, teenagers and adults.

Marœuil: Halloween party on Monday at the Trois-Rivières hall