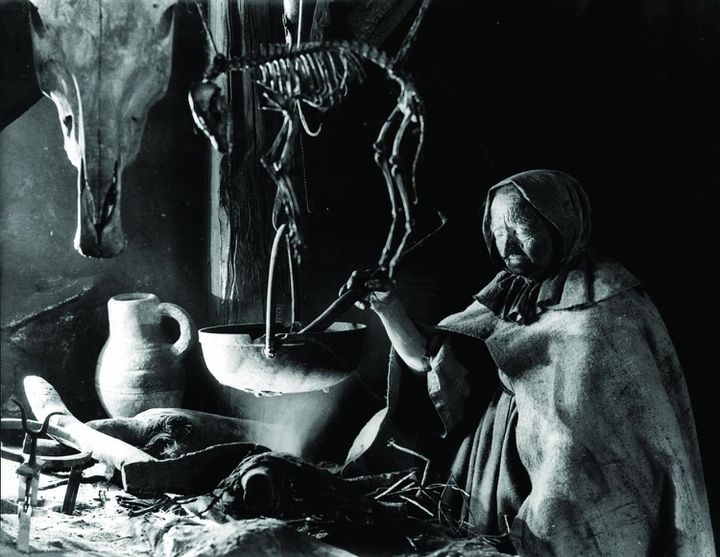 A masterpiece for some, an overrated film for others, Haxan, Witchcraft through the ages has caused a lot of ink to flow since 1922, when it was released. Potemkin is re-releasing the film in a beautiful DVD/Blu-Ray combo box set. No less than three versions are compiled there, with different music and multiple commentaries, including one by William Burroughs and the other by Jean-Pierre Kalfon.

Directed by the Danish Benjamin Christensen, co-produced with Sweden, the work testifies to the inventiveness of Nordic cinema in its infancy, which Carl Théodore Dreyer embodied even more at the same time. 1922 is the release of Nosferatu of Murnau, of German Expressionism, of a series of fantastic films to which haxan is identified by its subject, in addition to its “documentary” form.

Haxan opens with a somewhat scholarly, but beautifully illustrated introduction, explaining the origins of the supernatural in human consciousness, including belief in demons and other sorcery involving a view of the world. Then the film reconstitutes by successive stories the history of the Inquisition established in the 12th century by Spain and repeated everywhere in Europe until the beginning of the 18th century.

Who were the witches, their clients/patients, how their trials, tortures and executions took place… So many aspects evoked in the historical reconstruction, based on the trial minutes, testimonies and engravings of the eras crossed, over more than five centuries. A vast undertaking, which Christensen puts wonderfully into images. The Reconstituted Sabbath is a major piece of world cinema. He dwells on the Loudun affair where a convent was taken over by collective demonic possession in the 17th century, then turns to psychoanalysis.

Haxan draws from it the explanation of this murderous madness which made between 500,000 to 100,000 victims, very mainly women. The nascent psychoanalysis at the time of the film (1922) accuses the judges, ecclesiastics or not of the Old Regime, of sticking to behaviors since qualified as hysterical by Charcot, from 1860. The film does not pass not next to a feminist rehabilitation of all these women victims of a patriarchy which then reached its peak. Michelet was its precursor in The witch of 1862. The hysteria is located besides as much on the side of the women as of their judges, males, and most of the time clerks.

haxan is a classic that remains a “curiosa” in its subject, audacious, extremely documented, and its images. They evoke Jérôme Bosch, Goya, and 15th century woodcuts. Christensen plays a magnificent devil there, with a well-hung tongue, under an hallucinating mask, the humor points his nose and the poetry is constant. Shadow theater and magic lanterns are never far away. Loved by surrealists, it is also amazing that William Burroughs recorded a commentary of the film in his wonderful voice. That of Jean-Pierre Kalfon also fits perfectly in one of the three versions. The three musical scores are remarkable, in particular that of Dagerlöff & Galner, unpublished, alongside those of Art Zoïd and Mattie Bye. Esoteric and beautiful, a goth must-have.

“Haxan, Witchcraft Through the Ages”: the reissue of the silent film classic in a sumptuous box