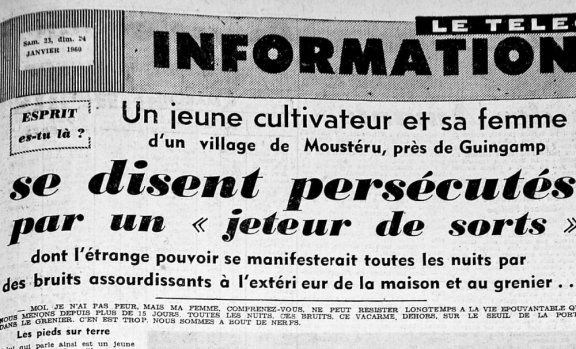 
January 1960, winter is in full swing in the city of Mousteru, plunged under a thick white coat. In this village, usually calm, some villagers challenge each other, others question themselves. In a neighborhood low mass, it is said that one of the houses in the town would be “haunted”. Sixty years ago, the Telegram leaned on this business, we return to it today.

Since mid-December 1959, a couple in their thirties has been experiencing “inexplicable” noises in their house every night at regular times; “a first time before midnight”, and a second time, around 3 a.m. Like “blows struck on a washing machine”, at the level of the sheet metal roof. When the gendarmes move on the scene, nothing. No footprints in the snow, no birds around, no trees above the house. Met sixty years later, the owner says: “If the house was haunted? I’m not sure. But what happened there was inexplicable.

Crescendo, until that famous night

“I could see that people were wondering if we hadn’t invented everything,” continues the octogenarian today, who has lived in her farmhouse for nearly thirty years. She recalls some intriguing moments. In particular, scenes where in the attic, closed, they had heard and found the weights of the scale, on the floor. Friends of the couple had witnessed it. Also contacted, a neighbor of the house, aged 13 at the time, remembers: “We wondered, everyone was talking about that at the time”.

There was this story around the husband, who was supposedly stuck in a field for several hours. He couldn’t find the way out. We wondered, everyone was talking about that at the time.

The troubles will continue, until this famous night, that of “terror”, which is mentioned in the press clipping. The spouses, lying down, wake up suddenly. They distinguish in the dark, the silhouette of their 3-year-old child, who plaintively calls to them, near his sister’s cradle. “My wife and I were bedridden, unable to move, mute with terror. Suddenly, I saw my wife lying on the ground, ”said the husband, now deceased. Several decades later, his wife confirms it: “When we pulled ourselves together, everyone was sleeping in his bed, as if nothing had happened”.

Between sorcery and bad tricks, the two Mousterusiens question themselves. “We were young, and at the time a little intrepid. As if to threaten the manager, at night, we cried “you can make as much noise as you want, you won’t prevent us from sleeping”, recalls the former owner. According to her, the nocturnal din lasted several months, and faded, until ending in May. Subsequent owners experienced no further troubles.

About the causes? In the 1960 article, the husband claimed he was a vagrant who cast a spell on them, with several people saying they saw and heard him near the local Calvary. Since then, his wife, basing herself on “hearsay” of the time, confides that she too was thinking of a curse, but more cast by a priest. Between interpreted legends or real facts, it remains difficult to sort out. To maintain the whole mystery: the couple will never have had answers to their questions. ?

Guingamp – 60 years ago, the “haunted house” of Mousteru troubled the peaceful town