This article was originally published by Elías Oxom in Prensa Comunitariathen edited and republished by Global Voices as part of a media partnership.

Adela Choc Cuz, a member of the Q’eqchi’ Mayan ancestral council of the municipality of El Estor, in eastern Guatemala, and her daughter Sandra Tec Choc, were released on the morning of May 17, after being kidnapped by a group accusing them of witchcraft and of having inflicted a serious illness on a woman in the community.

According to Choc Cuz, they were held in a house for over 18 hours, without food or water, in addition to being beaten by family members. They took his clothes, furniture and kitchen utensils; she had a mill to make nixtamal (corn flour tortilla dough), a refrigerator, a sewing machine and three bicycles.

Choc Cuz is considered a spiritual guide in her community and she is also part of the resistance to mining in El Estor. She is accused of witchcraft by Mario Caal Pec, the brother of Selvin Pec, who owns the evangelical radio station La Voz de Chichipate (The Voice of the Chichipate). Guatemalan President Alejandro Giammattei maintains a close relationship with conservative evangelical churches in the country, including on issues that polarize Guatemala, such as women’s reproductive health laws.

In Guatemala, a large majority identify as Christian: according to one census of 2015, 45% of Guatemalans say they are Catholic and 42% say they are evangelists. Protestant religions are gaining more and more ground in Guatemala.

Many natives practice Catholicism or evangelicalism, sometimes fusing Christianity with Mayan beliefs in the syncretism. According to reports and censusesthe natives —divided into 24 ethnic groups— represent between 45 and 60% of the population of Guatemala. The International Working Group on Indigenous Affairs (IWGIA) states: “The disparity between indigenous and non-indigenous populations is well known, particularly in terms of employment, income, health and education. Statistics show persistent practices of racism and discrimination against indigenous peoples. »

Choc Cuz said, “They accuse me of being a witch, but I’m a spirit guide. I demand justice from the authorities. Mr. Simón Tun Sacul attacked me and threatened to behead me, pointing out that he was a Kaibil [une unité d’élite de l’armée], and threw me to the ground. I have not committed any crime. I have seven children. They are all good people. The assailants doused me with gasoline all over my body. It’s COCODE’s fault [le conseil communautaire], who approved all this. »

Humberto Cuc, a member of the Q’eqchi’ Mayan Ancestral Council, condemns her events and claims that Choc Cuz is a spiritual guide and part of the Ancestral Council: “We performed Mayan ceremonies with her, what happened to her is painful . Often people are wrong. They think that by engaging in our cultural practices, we are doing witchcraft. But we respect evangelical religions. If they see us using candles to plant, they accuse us of sorcery. »

He mentioned that the ancestral councils for a long time had been guardians of the hills and rivers, though they were no longer seen as such by society. ” They hate her because she is part of the resistance against mining, the hatred towards her started when she rose up against mining activities in October,” said Humberto Cuc.

The municipality of El Estor faces tensions due to the opposition of the inhabitants to a nickel extraction company of the Guatemalan Nickel Company (CGN), a subsidiary of the Swiss group Solway Investment. According to the inhabitants, who are mostly Maya Q’eqchi’, the Fénix mine is contaminating Lake Izabal and reducing the quantity of fish. At the end of 2021, after years of struggle that ended in protests, residents were living under siege by the Government of Guatemala and being watched by armed soldiers.

The spiritual guide was released at 3am as people left the scene, except for the 15 COCODE members who held her in the house.

After the release of Choc Cuz and her daughter thanks to representatives of the Office of the Human Rights Ombudsman and the National Civil Police, Choc Cuz told the Prensa Comunitaria : “I was harassed by the COCODE [Conseil communautaire de Développement] led by Jose Ich. They came to set fire to my house with gasoline and arrested me. I stayed on the street. They burned everything I had. They burned my land title and five thousand quetzales in cash. »

When she was released, she had bruises on her forehead. Those who attacked her forbade her to return to the community and said they would hold a meeting on May 18 to propose that she be expelled from there. The spiritual guide filed a complaint with the Public Ministry. 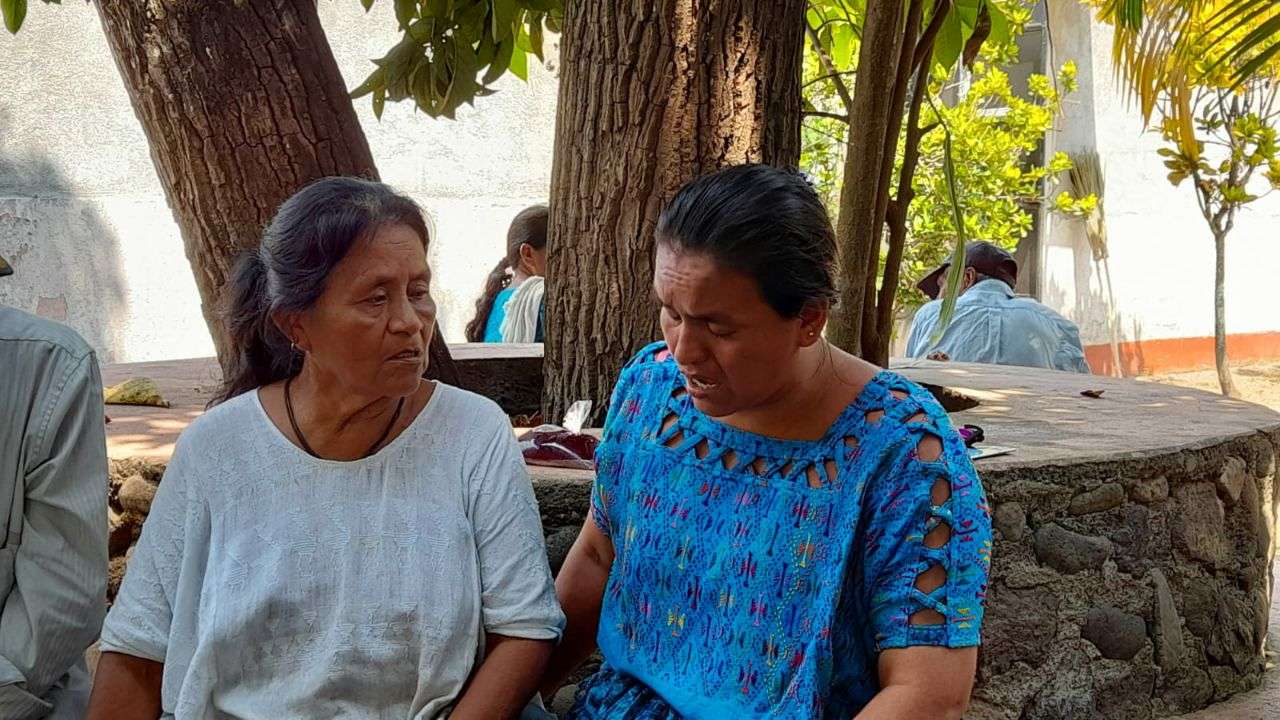 The lawyer Juan Castro, from Law Firm for Indigenous Peoples, asserted that in most cases the state does not punish serious violations like this. He also mentioned that the crime of witchcraft does not exist.

German Choc from the Oxlaju Q’anil Spirit Guide Collective explained that the role of a Spirit Guide in society is to help people, promote Mayan cultural practices, help solve problems, and that they are also contadores del tiempo.[les gardiens du temps].

German Choc said, “I demand that the state take action to eradicate these cases. I also urge the leaders of churches and sects to stop criminalizing spiritual guides and to promote peaceful coexistence, that they allow indigenous peoples to exercise their cultural and spiritual practices as provided for by the Political Constitution of the Republic of Guatemala in Article 66, where the State recognizes, respects and promotes the ways of life, customs, traditions, forms of social organization, use of clothing, languages ​​and dialects of the different peoples of Guatemala. »

Guatemala: a Mayan spiritual guide accused of “witchcraft”, then released.


Check out our social media profiles and also other related pageshttps://nimblespirit.com/related-pages/