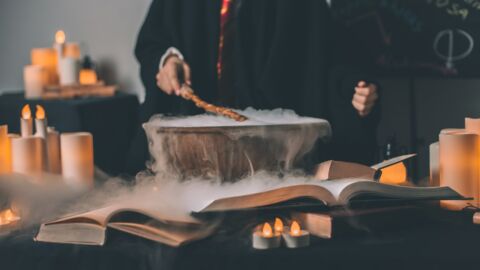 You do not know what to get a Potterhead for Christmas ? Here are 5 gift ideas to slip under the tree for a Harry Potter fan!

The best gift ideas for a Harry Potter fan

Your best friend, sister, uncle has always dreamed of receiving his entrance letter to the school of witchcraft of Hogwarts ? As a true Potterhead, he knows by heart the novels of JK Rowling and the eight films they inspired? As Christmas approaches, you don’t know how to please him? We have the solution: light on the 5 Best Gift Ideas for a Harry Potter Fan. Lumos!

This incredible LEGO set, representing the great scenes of the book Harry Potter and the Chamber of Secrets, will take effect. This Lego kit is the perfect gift idea for a Harry Potter fan. The decor to be reconstructed is very faithful to the book and the film. It features a lots of details that will delight Potterheads.

This LEGO set: Hogwarts Chamber of Secrets includes the great hall of the castle with Dumbledore’s desk and the Sorting Hat. The Chamber of Secrets with its hidden door and its underground are faithfully reproduced. Eleven figurines are provided, with of course Harry, but also Ginny, Albus Dumbledore, Professor Lockhart and Tom Riddle. The kit even contains an articulated Basilisk, whose mouth opens and the glow-in-the-dark ghost of Nearly Headless Nick.

This wonderful LEGO set will appeal to any Harry Potter fan, regardless of age. The Chamber of Secrets is of course compatible with other Harry Potter setsto represent the entire Hogwarts castle.

With this video game, gaming and Harry Potter fans will be delighted. Your Potterhead will be able cast spellsmake potionslook for the solution ofpuzzles and fight a duel in the magical and fantastic worlds of Harry Potter and LEGO.

This video game on nintendo-switch from the LEGO Harry Potter collection resumes the story of the 7 books of JKRowling. Players wander around Hogwarts, embodying a dozen different characters, and cast spells. The playful LEGO universe and the magic of Harry Potter go together very well, accompanied by good special effects.

Nothing more “collector” than a smallHarry Potter Funko Pop figure in vinyl. Especially if it represents Harry Potter in a wizard’s robe, accompanied by his faithful owl Hedwig. It will be the perfect gift idea for your Harry Potter fan.

This small statuette, 10 cm high, costs less than 40 €. It can be displayed on a shelf, desk or bedside table. This Harry Potter Funko Pop figure is the perfect companion for your fan of the Sorcerer’s Apprentice saga.

Does your friend already have a figurine of his favorite hero? Don’t worry, Funko Pop has created many heroes from the books. You will be able find RonHermione and many other characters in the same collection.

This chess game is the exact replica of that which is described in the first volume of JK Rowling, Harry Potter and the Sorcerer’s Stone. Thanks to Ron, Harry and Hermione solve this riddle.

This superb reproduction of the Harry Potter Noble Collection Wizards Chess Set has 32 pieces. The board is made of cardboard and the figures are made of PVC. The details of the pawns are extremely neat. Which will delight the biggest fan of the saga.

The rules are the same as in ordinary chess. Unlike the book, the pieces don’t magically move on their own, and thankfully don’t destroy themselves when you lose!

Impossible to recommend the best gift idea for a Harry Potter fan without mentioning the new game Hogwarts Legacy. This new RPG game is coming out on PS5. Fans already know that the release has been pushed back to February 2023. But, if you really want to gift it, know that it’s already up for pre-order. If your Harry Potter fan will not find it under the tree, he will nevertheless be overjoyed to receive this gift and to be among the first to be able to play it.

The adventure takes place at Hogwarts, in the 1800s, and the design of the game is stunning in detail. Hogwarts Legacy Deluxe Editionon PS5promises an incredible gaming experience, in the wonderful universe of the JKRowling saga.

So, what gift idea are you going to remember for your close Harry Potter fan?

We earn a commission on products featured on Gentside when you make a purchase from our site. Prices are given for information only and are subject to change.

Colmar. Violence against women: a screening-debate on Friday at the CGR
Why Some Civilizations Practiced Child Sacrifice
The witch, from horror to girl power
Tweet
Share
Share
Pin