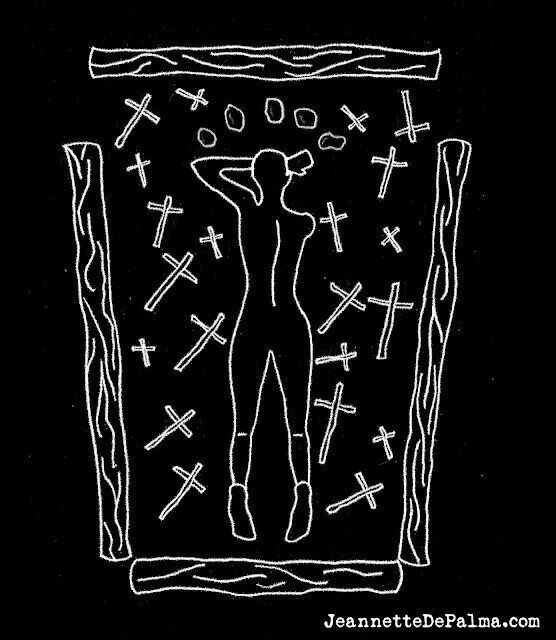 Jeannette DePalma, 16, disappeared on August 7, 1972 after leaving her home in Springfield, New Jersey. Closer returns to this mysterious case…

September 19, 1972. In New Jersey, at the foot of a building in Springfield, the owner of a dog surprises him playing with his latest find. From a distance, the object looks like a stick like the others. But approaching, the young woman has a high heart. In the mouth of her pet, she recognizes the decomposed forearm of a human. On the nails of the hand, traces of varnish. In shock, the young woman contacts the Springfield police. The latter sifts through the surroundings and finds, at the top of a cliff called “Devil’s Teeth”, the putrefied body of a teenager. “She was found face down, will say the report of the coroner, with stones arranged all around it.” According to some testimonies, occult objects, in particular small wooden crosses, are also discovered.

Thanks to dental documents, the victim turns out to be Jeannette DePalma, a teenage girl who has been missing for six weeks. Aged 16, she disappeared on August 7, 1972 after leaving her parents’ home to go to a friend’s house.

The autopsy did not reveal any fractures, bullet holes or trauma of any kind. It is therefore without a cause of death that the investigation opens. At first, the police suspect a certain “Red”, a homeless man who has taken up residence in the forest on the edge of the clearing. Nevertheless, this track is quickly abandoned in favor of a very different thesis: that of an occult sacrifice. Because of the stones found around the victim, arranged in the shape of a coffin, the press highlights the trail of a murder linked to witchcraft. “Authorities say Jeannette’s death is linked to a Sabbath or coven of witches practicing in the area“¸ writes The Associated Press, stating that the police would have used the services of a witch to advance the investigation. However, this has never been proven.

Because of young Jeannette’s beliefs, “devoted christian“according to his friends, the hypothesis of a satanic ritual is also put forward. The Reverend James Tate, pastor at the church that the teenager often attended, went so far as to claim that Satanists would have kidnapped and killed her because of her faith: “She was so pious (…). Their fanaticism took over and they killed her“, will declare the religious.

Fifty years later, the murder of Jeannette DePalma remains unsolved. After studying the trail of a serial killer, the Springfield police lost the file during Hurricane Floyd in 1999. Nevertheless, the young woman’s relatives remain hopeful of one day unraveling the mystery of her death. Edward Salzano, a former friend of Jeannette’s nephew, with whom she was living at the time, is now leading the investigation on his side.

Jeannette DePalma
Press clipping dating from the 1970s evoking the trail of an occult sacrifice.

A witch
The thesis of occult sacrifice has been studied in particular.

A dog
On September 19, 1972, a dog brought Jeannette DePalma’s rotten arm back to its owner.

Was Jeannette killed by fanatics?
The satanic ritual thesis has been studied.

A forest
Jeannette’s body was near a forest.

The DePalma file has been lost.
Springfield police say they lost the case during Hurricane Floyd in 1999.

FORGOTTEN BUSINESS. Jeannette DePalma, this teenager sacrificed against a backdrop of witchcraft and satanism