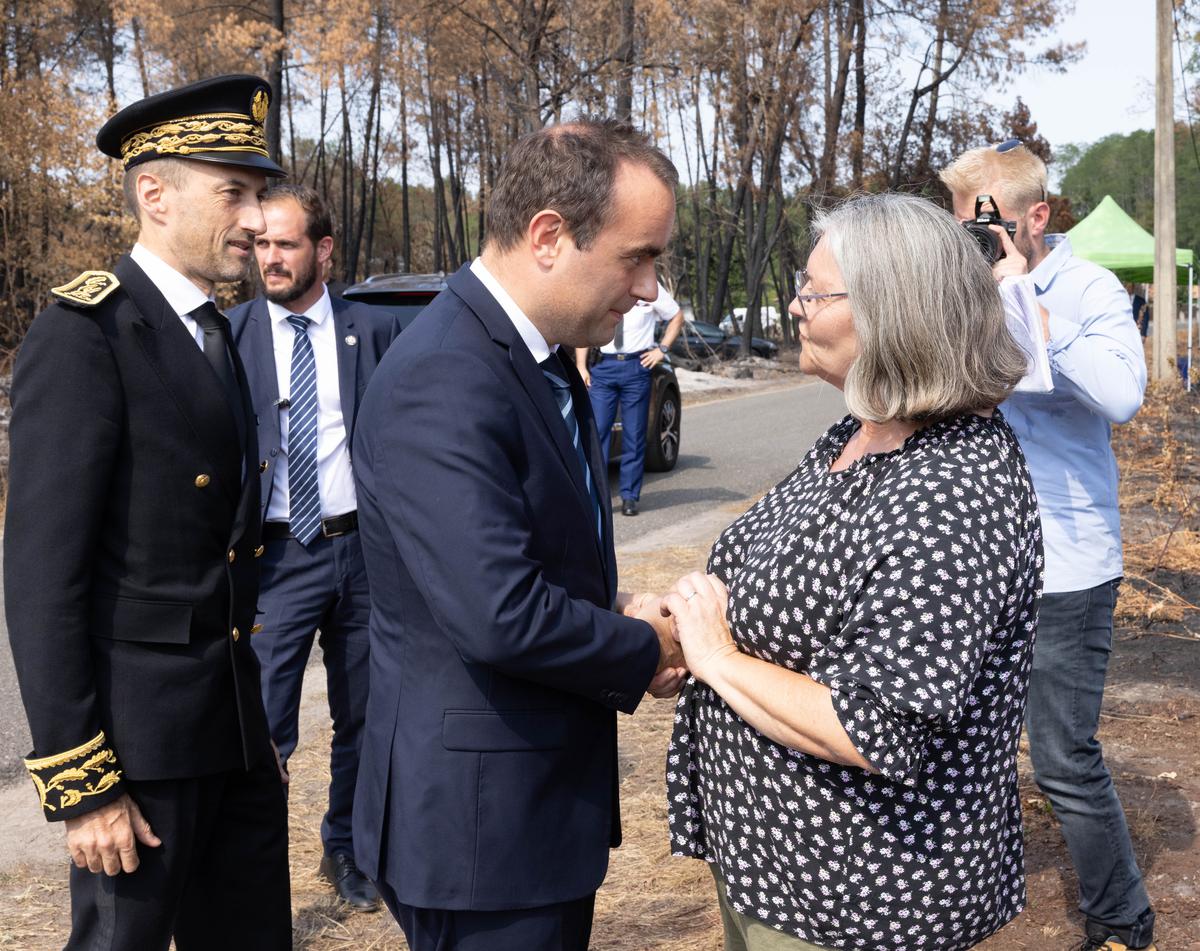 The Mayor looks tired and makes no secret of it. On the other side of the road, firefighters and soldiers refuel in the pyramids of drinks stored on the tables…

The Mayor looks tired and makes no secret of it. On the other side of the road, firefighters and soldiers refuel in the pyramids of drinks stored on the tables in the village hall. They are fighting the “Landiras n° 2” fire which has been torturing Saint-Magne, Hostens and Belin-Béliet since August 9th. In the village, surrounded by a haunting landscape of pine skeletons smeared with charcoal black, the atmosphere tends towards the morose. “People fear it will happen again. They monitor the passages, which is very good, but the situation also creates a climate of mistrust. Everyone watches everyone. As soon as an unknown car slows down or stops on the side of the road, we receive calls,” summarizes Mylène Doreau.

In Guillos, we have the firm conviction that the monster that gorges itself on the fuel of the parched forest was born from a match struck by the hand of man. And we see that to date, no arsonist has been confused. So the threat persists. “Yes, it creates suspicion. Will the fire start again through someone’s fault? asks Monique Courbin, an octogenarian from the village who is trotting back from the church, which she aired out at dawn, before the ending heat wave closed her fist on the building.

It’s Monsieur Tout-le-Monde who is setting the fire, how do you know? »

A few kilometers to the south, in Origne, we are assured that the nagging doubt about the identity of the possible arsonist(s) has not altered neighborhood relations. The authors are perhaps citizens with no history, crossed by chance in social life. “It’s Monsieur Tout-le-Monde who is setting the fire, how do you know? Weighs Maryse Desenlis, a former elected official who came to lend a hand at the town hall. Last month, flames devoured his garage.

On the legal side, the investigation is continuing. Two investigating judges were seized by the Bordeaux prosecutor’s office. Two people were taken into custody and cleared in July. “In the villages, news travels fast. We know very well who it is, ”slips a resident of Landiras. “It’s an open secret,” admits Jean-Marc Pelletant, the mayor of the town.

Neither he nor Jean-Philippe Dulou, his municipal councilor responsible for forest heritage, sinks into paranoia. The two chosen ones stick to the evidence. “We can’t explain certain resumptions of fire, even if it can run in the peat and reappear further on. It probably requires human intervention. Human and voluntary”, they sigh. The witchcraft of simultaneous fire outbreaks at distinct points in the forest canopy lends credence to this thesis. Faced with danger, Jean-Marc Pelletant only gives one piece of advice: “Keep your eyes open and take note of the license plates. »

Fire in the Landes and Gironde: our file

A few weeks after the fires that ravaged more than 20,000 hectares of forest in July, the Gironde is ablaze again in August. The fire reached the Landes in the night from Tuesday to Wednesday. More than 6,000 hectares went up in smoke

With her baguettes under her arm at the exit of the Landiras grocery store, Catherine is one of those many inhabitants who, for lack of tangible elements, explore all the hypotheses. “Wouldn’t there be a commando, with people communicating with each other to start fires all over the place at the same time? she asks herself. “When you have a fire here, a fire in the Médoc, a fire in the Arcachon basin… We quickly reach the point where we make films”, admits Mylène Doreau.

The weariness and exasperation born of a long, smoky summer hardly encourage the population to show leniency towards the possible perpetrators of the double disaster in South Gironde. Promises of expeditious processing are commonplace. “If we ever catch one that sets fire…”, we say here and there in a knowing tone.

It would be better if the gendarmes arrived before us”

“It would be better if the gendarmes arrived before us. We are not judges, we need evidence to convict people. But if I had an arsonist on hand, I would really want to lock him in the truck and set him on fire. For the truck, I am insured”, quietly explains a citizen of Guillos who is waiting for his work colleague opposite the church of Landiras. He was evacuated. He dropped everything for days to fight the fire. Don’t talk to him about forgiveness.

“There are criminals but there are also idiots”

At this point, these bravado words dissipate in the air more surely than the lid of the fumes which overflows on the Sauternes. Their repetition nevertheless arouses a touch of concern among elected officials, aware that the ambient nervousness is a breeding ground for bloodshed. “I heard hunters say that if they cornered one, he would take a bullet”, slips, sorry, Jean-Marc Pelletant. “People might be tempted to take the law into their own hands. Some of them are already tending to settle their scores these days. It is better not to look at social networks, it is depressing, ”judges Mylène Doreau.

Mayor of Origne and President of the Landes de Gascogne Regional Natural Park, Vincent Dedieu ends with yet another videoconference in his office. He tackles the subject with humor. “The arsonists would have to go from village to village, half an hour each, no jealousy,” he jokes.

Fires in Gironde: “If we ever catch one that sets fire…”