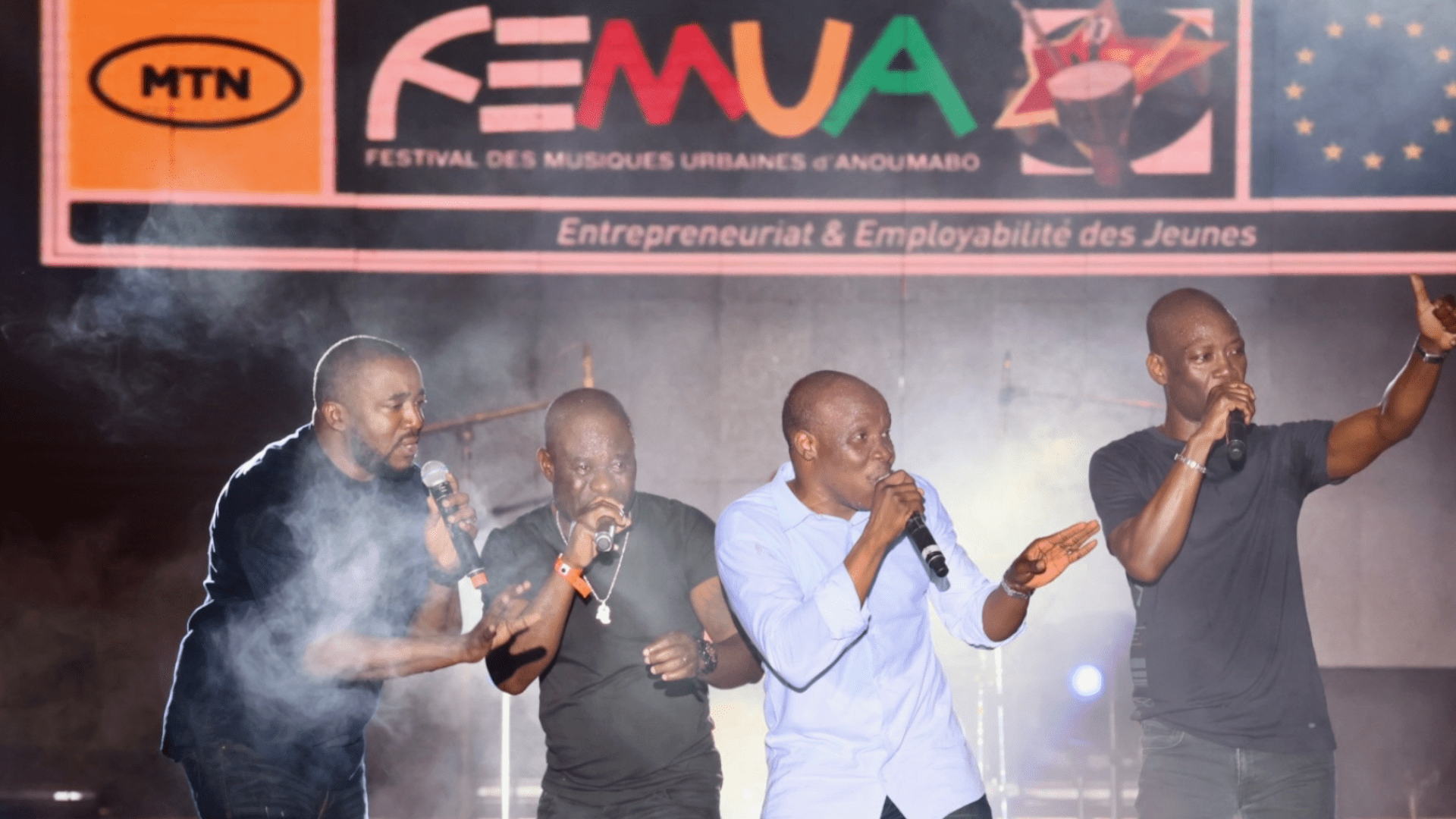 In this little rainy season, the weather did not announce anything worthwhile. During the few days of the Urban Music Festival of Anoumabo (Femua), in Abidjan, the sites predicted serious storms. Moreover, the evening of Thursday, May 12, in honor of the Democratic Republic of Congo, with Viva la musica, orchestra of Papa Wemba, who died on the festival stage in 2016, and his sidekick Félix Wazekwa, turned at vinegar, canceled by a torrential rain. So, in order not to drink the cup definitively, the organizers decided to take the bull by the horns. And to consult the “rain commission”, just to tame the elements. Magic, sorcery: the operation worked so well that not a single drop came to spoil the party. If the anecdote can make you smile, it remains symbolic of this mesh of tiny and gigantic miracles, which weave this radiant festival, a small utopia cleverly built since 2008.

Fourteen years ago, therefore, the world ambassadors of zouglou, shock ambiencers, Magic System, sowed this seed, in their underprivileged district of Abidjan, Anoumabo, “village” and sub-district of Marcory, on the edge of the lagoon, 70,000 inhabitants, streets of beaten earth, maquis and odds and ends stalls, cosmopolitan population. Over the editions of this completely free festival, imagined with just the right amount of flair, commitment, intelligence and luck, the okra sauce has taken hold. So much so that the Femua has risen to the rank of the continent’s major events, with its 100,000 spectators per year. On the strength of this success, there is no question of abandoning the backbone of the adventure: its social vocation. Thanks to the spin-offs, Magic System builds schools, libraries, renovates hospitals…

The Magic System group on the Femua 2022 stage.

Behind the scenes of this vast protean, ubiquitous raout, a big boss pulls the strings, with his impeccable white shirt, his little professorial glasses and his mischievous smile of an eternal child. From his “general secretariat”, air conditioning pushed to the max in the middle of the moist heat, the “general commissioner” Salif Traoré, known as A’Salfo, lead singer of Magic System, with an Olympian calm above the storms, explains this year’s theme, “entrepreneurship and youth employability”: “The youth (77% of Ivorians are under 35, editor’s note) constitutes the wealth of Africa, its base. But if it is not given the necessary tools to evolve, it will not be useful for the development of the continent. The crossroads of youth, during the Femua, allow them, for example, to meet companies, professionals, etc.”

Throughout the day, cohorts of young people, students, criss-cross the stadium of the National Institute of Youth and Sports (INJS), site of the festival, and its prefabs, according to free and joyful exchanges . They carry the future and hope. A’Salfo, their “old mogo, their old father“as they call him here, knows something about it, he who grew on the same soil.

In tune with the theme, the musical programming also welcomed a majority of young shoots, sometimes already superstars. The venerable (and assumed) deans of this edition? The Magic System, and their “promo buddies”, the sacred monsters of zouglou, the thundering duo with the impeccable “groove machine”, Yodé & Siro.

Among the new generation, Fior 2 Bior, child of the village, acts as the new darling of Anoumabo. At 23, including three in his career, this big guy, with a chubby head and a slightly quirky phlegm, has already made prestigious featurings, with the rapper Niska, for example, in his hit Gnonmi with milk. In less than a week, he is preparing to conquer Europe. This Saturday, May 14, during his concert on the small stage, the crowd resumes as one man his hypnotic refrain, “Godo Godo“.

When he leaves the boards, surrounded by his bodyguards, hordes of fans assail him up to his gleaming SUV. It must be said that the star with the cryptic name, despite his attempts at decoding, in connection with the Holy Spirit, could be labeled “official distributor of good humor”. Because if he goes on stage, it is above all to ward off his personal tragedy: the death of his father. His music ? The “Gbopkarada”. Either an explosive recipe for variety, rap, Afro… In short! Sound for dancing, which, he assumes, “carries absolutely no message“. His role remains clear: “entertain people“. And after all, isn’t dance and the liberation of bodies also political? He himself was inspired by the mentors of the demonstration: “Thanks to Magic System, from my Anoumabo cradle, we say to ourselves that even from here, we can become someone…”

Another figure of the young guard, the self-proclaimed boss of ivory rap, a hip hop movement that is sweeping the country, sung in nouchi, this slang of the streets of Abidjan, on zouglou or coupé-décalé beats, crosses the site of the ‘INJS, pursued by his fans, with this rallying cry: “union!”. He calls himself Suspect 95, after his video game hero, a rapper experienced in combat sports, associated with his year of birth. “The guy had always filled gauges, he was unbeatable…”he exults.

Guy Ange Emmanuel, a child of Cocody, an upscale district of Abidjan, son of a colonel and a teacher, started rap in college. One of the games at recess? Freestyle sequences. To increase his rating with the “go” (the “girls”), the boy sticks to the exercise. “At first, I was useless, but I worked, I wrote texts by the hundreds, I refined my technique. My lyrics have become impactful. They aroused enthusiasm!“.

The Triomphe label spots the young man. After his baccalaureate, he started his career as a quarter turn. First big hit? Boss child, it’s boss, on the fatality of social classes. Everything is already there in germ: his flow, his Nouchi accent, his commitment, and above all, his humor and his self-mockery. On the big stage of Femua, Suspect 95, now signed to Def Jam Africa, delivers, in the middle of the night, in front of a crowded audience, an impeccable and relentless show, full of strength, good humor and jokes … Suspect 95 named their fan base, their crew, the “syndicate”. And for all trade unionists, there is this clear philosophy: girls and boys can be actors in their lives. “I explain to each of my fans that, like me, they can fight, create their autonomy, their success, he said. They must not rely on anyone, but rather create their own luck, thanks to their work, their convictions… “

An attitude in line with that defended by Magic System which crowds the stage of Femua on Saturday May 14 around 11:00 p.m., in the presence of the chieftaincy of Anoumabo and the Prime Minister of Côte d’Ivoire Patrick Achi. Many emotions run through a compact crowd, including a bunch of teenagers, sweaty, sometimes in tears, gathered, almost to the point of dizziness, in front of the stage.

Their hits, ultra popular, without the slightest wrinkle, carry within them all their limpid and effective wisdom, as in move move : “As long as there is life, there is hope“, echoed by thousands of lips. And then, after a Premier Gaou well sent, their hymn resounds, in final bouquet: “there’s magic in the air!“. And in front of a cloud of mobile phones converted into torches, like so many stars and wishes to blow out, we remember the words of Prime Minister Patrick Achi on the big stage just before the show: “Everything is always possible for those who dream big!“Word of magicians.