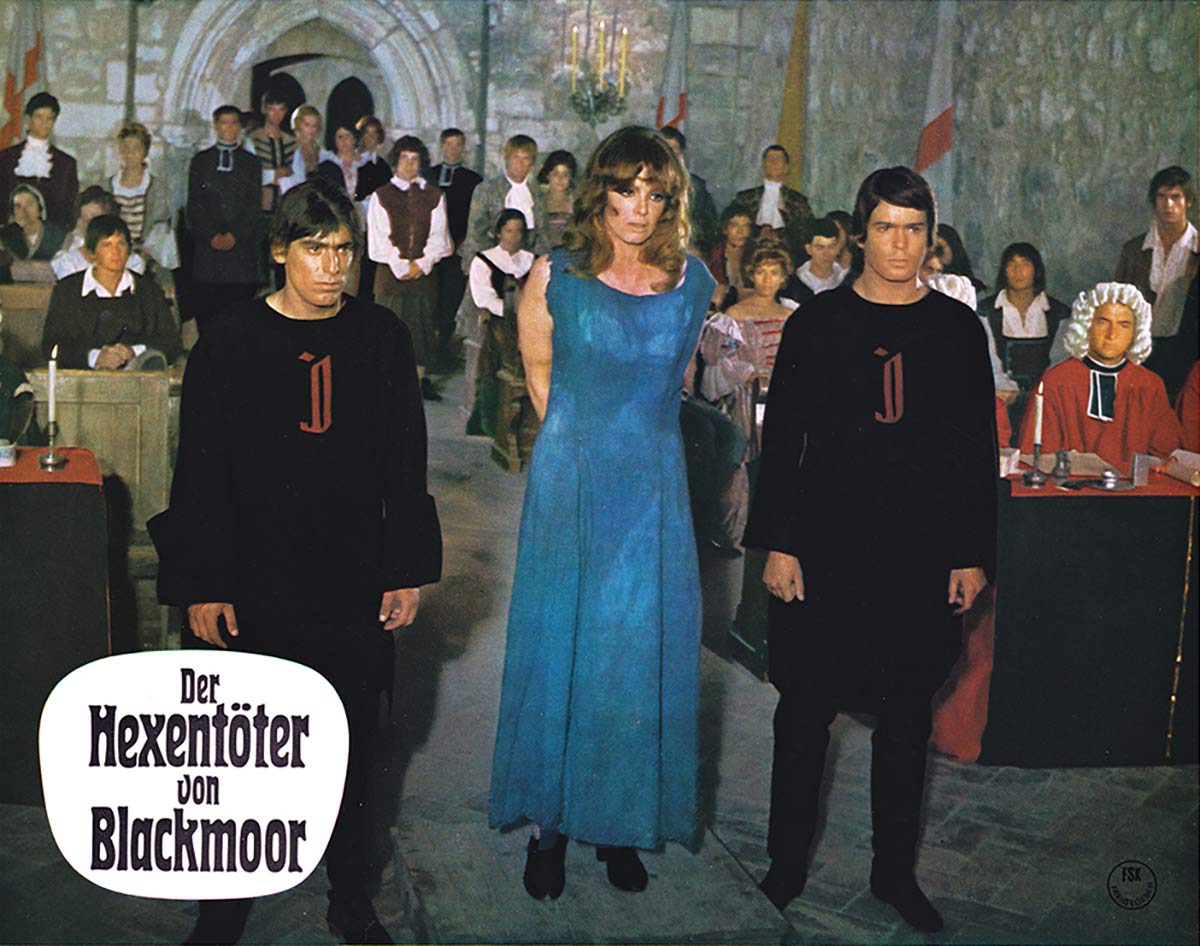 England, 1685. On the death of King Charles II, Jacques II ascends the throne but part of the population is loyal to William of Orange, in exile. In order to control the conspirators, Judge Jeffreys relaunches the witchcraft trials, arrogating to himself the powers of an inquisitor. The family of Lord Wessex, whose son is in love with one of the defendants, soon opposes this bloodthirsty judge.

The Throne of Fire (El Processo de las brujasRFA-Ital.-GB 1970) by Jesus Franco is one of his most famous films devoted to the inquisition, here English.

Produced by Harry Alan Towers, shot in CinemaScope-color, it can be seen as a variation of The Grand Inquisitor (The Witchfinder General / The Conqueror Worm, GB 1968) by Michael Reeves. Christopher Lee plays a role similar to that played by Vincent Price in 1968, but the screenplay gives it a more administrative, less adventurous aspect: the criticism becomes frankly historical and political. Excellent female interpretation, starting with Maria Rohm (wife of the producer Towers and who plays in almost all of Franco’s films produced at that time by her husband). Maria Schell plays a curious role of blind witch; Diana Lorys and Margareth Lee complete the deal very nicely.

Franco’s staging is dynamic despite the unexpected surprises of the subject, for those who have already seen contemporary productions by Michael Reeves (1968), Adrian Hoven and Michael Armstrong (1970), Gordon Hessler (1970). Especially in France where his title is distributed almost three years late. The format of the image, the fairly high number of extras, the beauty of the artistic direction confer a certain luxury on this series B. A few more personal moments, sometimes almost fantastic: Maria Rohm kissing for a long time and tenderly the tortured body a fellow prisoner. Howard Vernon composes a half-expressionist, half-comedic executioner in whom we do not believe for a moment, but the disfigured valet who has become a whistleblower and purveyor impresses more.

The Throne of Fire is an interesting milestone in the category of fantastic cinema devoted to witch hunters, but the scenario is conventional: only Maria Schell embodies a character who can evoke a truly supernatural influence, but it is poorly exploited. A few rare moments, however, testify to a sometimes baroque plastic inspiration: for example this magnificent shot (of a scene curiously cut but presented as an extra) where Maria Rohm advances in the treacherous water of an immense marshy lake, her dress brightly colored against the black and green immensity. 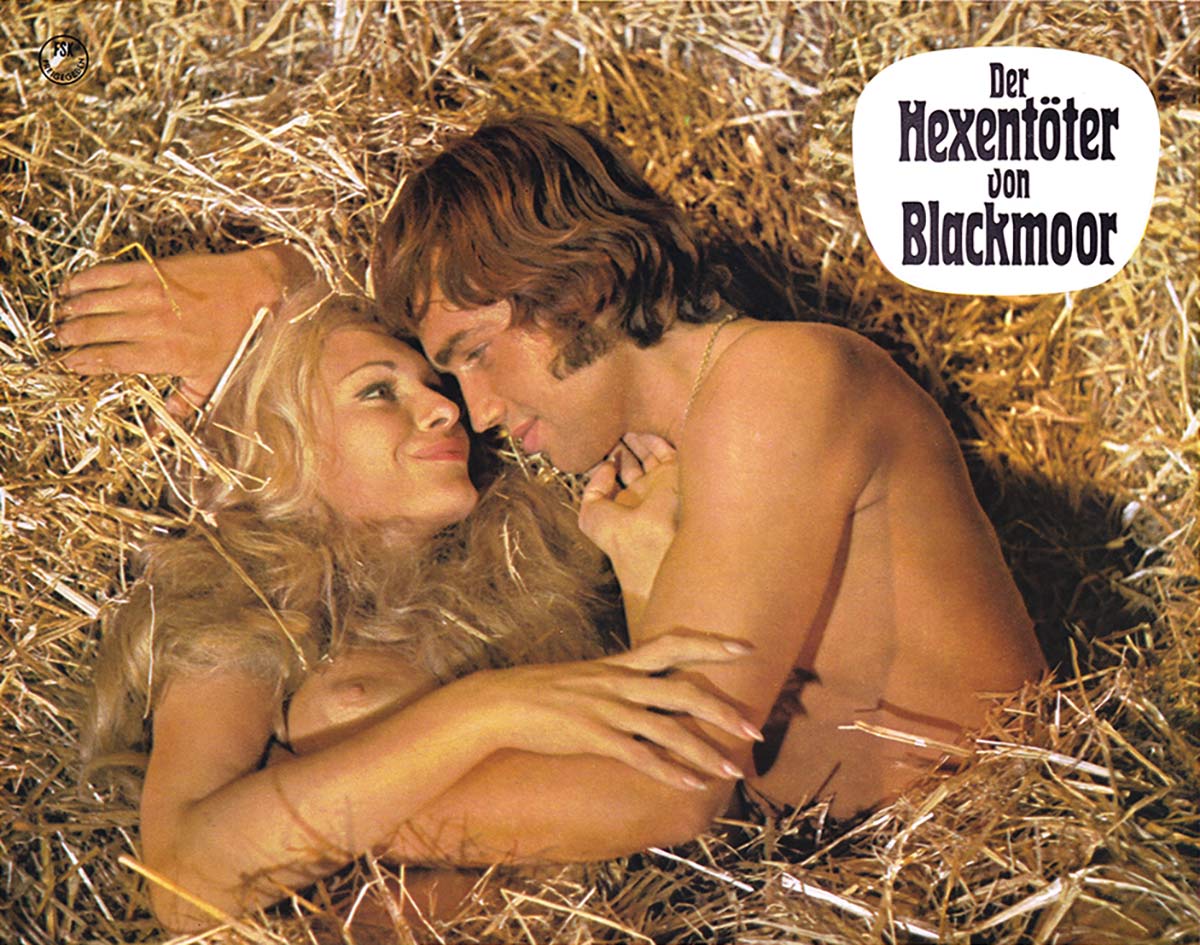 1 BRD Full HD 1080p region B + 1 region 2 PAL DVD released by Artus Films on May 17, 2022, 2-panel digipack illustrated in slipcase. Color image in the original 2.35 format respected, compatible with 16/9. Sound Linear PCM 2.0 Mono VF + VASTF. Film length on Blu-ray: 102 min 37 sec., on DVD: 98 min. 25 sec. Extras: a deleted scene (duration 5 min. 39 sec., original VF, 2.35 format respected) + slide show (photo gallery and posters) + presentation of the film by Stéphane du Mesnildot (approximately 17 min) + trailers. The general menu opens with the vision of the different covers of the Jesus Franco film editions available from Artus, but it is impossible to freeze the image in order to examine them. Beautiful vintage Italian poster reproduced on the case: it is much superior to the illustration used for the case.

Cut sequence (duration: 5 min. 39 sec., 2.35 format respected, VF of the time): it is worth because of a magnificent photographic composition of the colors, in particular the shot already mentioned where Maria Rohm is about to commit suicide by drowning in a huge lake shaded by tall trees, with black and green marshy water. The VF sound track is interrupted for a few seconds but the sound of the rest is correct and the image is beautiful.

Trailers : that of Justine or the misfortunes of virtue at the time titled De Sade – The Misfortunes of Virtue is in good silver condition, in the large format respected. She is very well put together and gives a great idea of ​​the film and its spirit. It also mentions at the end the official administrative ban (forbidden to under 18s) since reduced to a ban for under 16s. This is followed by the American trailers of 99 women and The Throne of Fire under one of its many and often absurd American exploitation titles. Mediocre silver states (and cropped format for the second) but tasty documents.

Slideshow : around 25 well-reproduced documents, including Italian and American posters, American color operating photos (lobby cards) and German, some B&W set photos. The example of what to do.

Presentation of the film by Stéphane du Mesnildot (duration approximately 17 min., 16/9): it places the film precisely in the history of the “witch hunters” category of fantastic cinema, mentions the classics of the genre from 1928 to 1970: The Torture Chamber (Pit and the Pendulum, USA 1961) by Roger Corman is however unfairly forgotten. Mesnildot is interested in the good Austrian actress Maria Rohm (one of Franco’s favorites at that time and who was the wife of his producer), in the staging on the aesthetic level (good remark on the lesbian sequence of Maria Rohm ), a historical and critical review of the script. Good point on the name of the production company of Towers, its possible relation to the film (quite disappointing, by the way: its 1962 “remake” signed by Corman is better) signed by Rowland V. Lee in 1939 and the fact that Franco and Howard Vernon could have been inspired by the role of executioner that Boris Karloff played there. Not a word about the curious role played by Maria Schell or the interesting presence of Diana Lorys and Margareth Lee, but in 17 minutes, Mesnildot delivers other information and cannot say everything either.

All in all, honorable special edition.

Vintage VF and VASTF in LPCM 2.0. mono. The English track is in better technical condition than the French track which suffers from a few occasional faults (untimely modification of the scrolling speed, hissing, even absence of a few seconds in the case of the cut scene). STF readable, not too big. It nevertheless deserves to be listened to because dramaturgically quite neat. Standard music, without particular genius – especially if we compare it to the admirable score that Nicolai had signed for Franco in 1968 – but it is also neat, signed Bruno Nicolai.


Explore our social media accounts along with other pages related to themhttps://nimblespirit.com/related-pages/