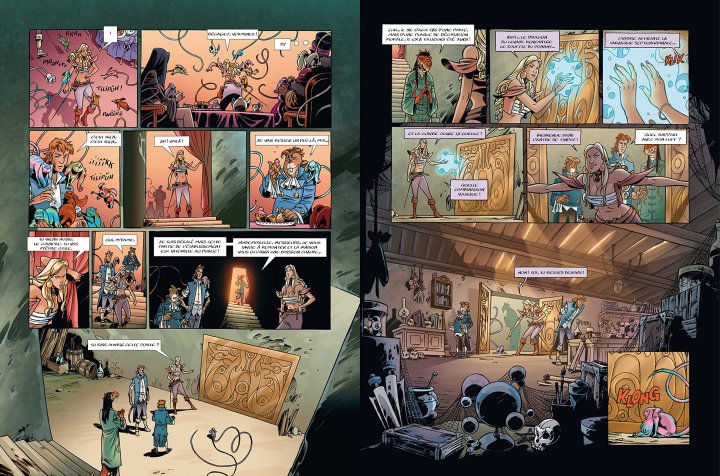 The saga Danthrakon declined in three albums is now likely to know variants in the form of spin-off. This is the case with this last opus: Danthrakon’s Curses.

In this new story, we follow the misadventures of the lovely Ptolomelle, a singer in the beautiful city of Carie-du-ciel. But the singer is blackmailed by the Thieves Guild. Of course, the famous grimoire (which has become a music lover on occasion!), a fundamental element of the series and with sometimes uncontrollable powers, is at the center of the story. Will it be a blessing or, on the contrary, a threat to her destiny as a singer? In the program ; magic, special effects, fantasy, spells and… a hint of glamour.

Each new opus should in the future offer new characters in different contexts within new settings. The common point nevertheless remains the grimoire, the anchor point of each one-shot designed as independent of the rest of the saga. 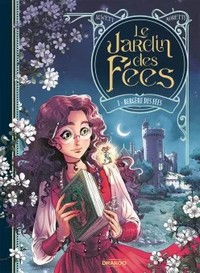 In The Fairy Garden, Lucie is sent to the Domaine de la Crapaudine to stay with her uncle and aunt. The least we can say is that this family is neither friendly nor welcoming, not to say downright hostile. There she discovers a dark and mysterious universe as well as a garden occupied by fairies. But this fairy garden seems threatened. Will Lucie manage to reconcile the world of humans and this “grass people”?

Pleasant graphics and late 19th century atmosphere are part of the decor of this seductive album. The cutting and the layout alternate between botanical plates and excerpts from a diary in a variant of sepia tones, testimony to the young girl’s desire to become a naturalist. This investigation led by an attractive and friendly heroine flirts with the worlds of Beatrix Potter by the sweetness and poetry of his universe. Audrey Alwett has already carved out a great success with the scenarios of the Grimoire of Elfie, published under this label, or even Princess Sara. With this rich and dynamic first volume, this fantastic investigation in the land of fairies is undoubtedly destined to experience great success.

In The Sarcophagus of Souls, we follow the misadventures of Mercy, a hectic and energetic young girl in the city of Shaalem at the end of the 19th century. It doesn’t take long for her to find herself at the heart of a (very) dark story, where witchcraft and fantasy serve as the backdrop to an intrigue with a disturbing climate and almost gore! Her mother being accused of witchcraft, it is up to the girl to fail the heavy task of rehabilitating her and above all of thwarting the diabolical trap in the center of which we find a strange sarcophagus. Strange, menacing and about to come back to life… but for what purpose?

On a scenario of Serge Letendrethis story drawn by Patrick Boutin-Gagne where women hold important roles takes on the appearance of a solid fantasy story, offered in the form of a well-directed one-shot, surfing on disturbing and tense atmospheres.

With The White Whale of the Dead Seas, it is the meeting of Bengal, a solitary hero, and Chrysoara, a beautiful young woman who dances with jellyfish, which serves as the starting point of an adventure combining a story with an ecological background and a fantastic story. The album imagined by Aurelie Wellensteinillustrated by Olivier Boiscommun takes place in a world where seas and oceans have disappeared. Although all the water has evaporated, phantom tides surge across this new world under the threat of specters hungry for revenge. This fantastic story comes in a magnificent, rich and spectacular illustration with a strong power of attraction. The particularly effective coloring in the restitution of lights and atmospheres between fantasized or dreamed aquatic visions contributes to making this story captivating and very attractive.

In The Baroque Epic of the world that did not want to turn, Arleston to the script and Dimat for the drawing, invite us to discover a kingdom crossed by court intrigues, assassination attempts and heavy secrets.

The young Altek is destined to become emperor of the city of Omnamül, but he only dreams of democracy and openness. On the eve of his coronation, the world stops spinning! The consequences are then terrible: in some places, the cold sets in while elsewhere an unbearable heat reigns, the inhabitants must seek refuge or adapt… Accompanied by the truculent and energetic Irliti Milti Tidzi, Altek will find himself charged of an impossible quest: to find a way to restart the world!

Unaware of each other, they are sent to the island of Arcana to follow their apprenticeship. Learning their kinship, they discover that they are wanted by disturbing creatures, a terrible prophecy hovering over their heads. Serena Blascothe author of the comics Enola Holmes and adept of tarot, has chosen to immerse its two heroines in the fantastic and magical world of the Arcana.

Between magic and technology, the Empire of Valania prospered, until it was invaded by almost invulnerable monsters. Only a strange sword can neutralize them but it is linked to a young palace servant. The fate of the world now depends on him…

In The Guardians of Aether by Gay and aucomtewe come across a temperamental princess with magical powers as well as a mysterious and dangerous pirate with mysterious motivations.

We shouldn’t forget the excellent series les artilleuses de Willem and pevel with a universe both inspired by the steampunk and historical comics with a particularly well-identified trio of heroines.

Through this quick overview of some of the label’s albums Drakoo, we can see that there is a large place for heroines. The initiative has the merit not only of breathing new life into fantasy or fantastic adventure stories, but also of allowing young authors to express themselves.

If these heiresses of the famous Barbarella of Jean-Claude Forest (1964) do not always have the title role, their presence is not limited to an action of foil and most often has a decisive action on the narration.

Should we speak of the emergence of a new genre? This quick inventory of the main new products listed in the Drakoo catalog could lead you to think so. Answer to come… in the bins!

This article remains the property of its author and may not be reproduced without his permission.

Drakoo, a fantasy label where heroines have the part (…) – ActuaBD