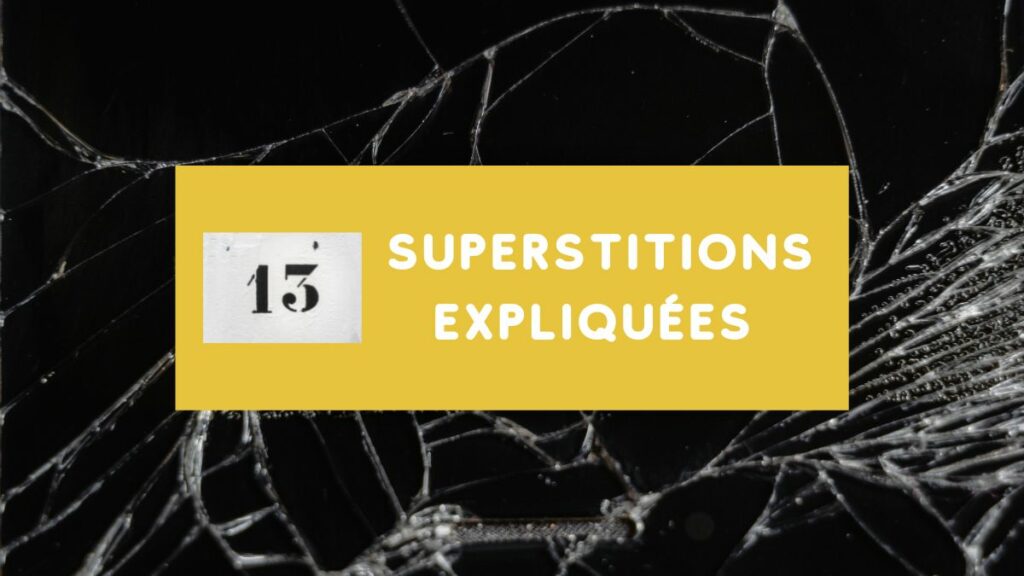 Flipping the bread, breaking a mirror… You’ve always wondered where these superstitions come from, and here they are explained!

So, are you superstitious? We, yes, a little. In any case, it seems almost normal given the number of superstitions heard since our early childhood. But, have you ever wondered why we are afraid when we pass under a ladder? Or when you see a black cat. Well, if you want to learn a bit more about the origin of the most popular superstitions, we invite you to read this article. We’re willing to bet it: you’re going to be surprised. Here we go.

Breaking a mirror is 7 years of bad luck

“A broken mirror is to receive 7 years of misfortune”. Everyone has already heard, at least once, this kind of curse. But, what does this superstition of the broken mirror mean? According to Wikipedia, “Seven Years of Misfortune is an expression referring to the symbolism of a broken mirror. The broken mirror has been the subject of superstitions since Antiquity. Both the Greeks and the Romans practiced catoptromancy because they thought that the mirror was the reflection of the soul”.

Thus, this expression has a hard tooth and comes directly from the Greeks and Romans. For them, the mirror, like reflection of the soul in religion, therefore had to remain intact in order to preserve the spirit that inhabits us. If it were broken, it would have repercussions on the soul.

But then, why 7 years? This mainly comes from Romans. They considered that a person’s life was divided into 7 cycles, or rather in 7-year increments. From 0 to 7 years old, from 7 to 14 years old, etc. That’s why breaking a mirror meant having his soul broken, cursed, for a whole 7 year cycle. The next cycle representing renewal for each person.

Superstitions explained: going under a ladder

Why do we say that going under a ladder or scaffolding is a sign of bad luck? Like many superstitions, this one comes to us from Christianity. The Christians, more than 2000 years ago, had hoisted jesus on the cross to crucify him with a ladder. So going under would be a sign that we’re the next to suffer this fate… Well, we never said that the explanations were very logical.

In any case, it would also come from hangings, where ladders were used by convicts to reach the scaffold. During the Middle Agesthe scale was synonymous with death, in all areas.

Seeing a black cat in the street, a bad omen?

New superstition which comes to us from Middle Ages. In Europe, during this period, the black cat was equated with witches. So during thepuritan era, many women were accused of witchcraft and killed. Thus, black cats, seen as the companions of witcheswere burned alive at the St. John’s Day.

It was limited to a hunt for the black feline quite appreciated by the population. Nevertheless, the mass killing of cats had an impact on the wildlife in town at this time. Less cats, so more rats to roam freely without being chased. Results ? Plague ! Seems like karma does things right.

Seeing an owl at night or hearing it sing would be a bad omen. But why? It’s so cute an owl. In reality, these animals were equated with death and disease during the Middle Ages and Ancient Egypt. Assimilated to witchcraft and to malice (like the snake also and the cat), the owl and the owl would announce an imminent death.

Don’t put bread on the wrong side of the table

The Middle Ages left many superstitions behind. The one who says that bread put upside down on a table is bad luck comes from this period as well. ” In the Middle Ages, the day of public executions, the baker reserved a loaf for the executioner. He put this bread upside down to be sure not to sell it to someone else. Everyone knew that this bread was that of the executioner, and no one touched it. », Jesuiscultive.com explains to us.

This practice, a little later, was taken up in the Catholic religious context. For believers, turning over the bread would invite the demons (and especially Satan) at the table.

Walking around with an empty bucket? Superstitions Explained

Open a umbrella inside would also bring bad luck. This superstition comes to us from England. It dates from the 18th century. At that time, the opening mechanism of the umbrellas metal frame was very dangerous and you could hurt yourself or even kill someone and damage an object by opening a umbrella inside.

SEE ALSO: Poll: Would you rather travel to the past or the future?

Sometimes it brings good luck, sometimes bad luck. Number 13 is often dreaded. And the triskaidekaphobia does not come from yesterday.

“The number 13 holds a special place in the symbolism of numbers: in much of the Western world, it is associated with bad luck. So why does superstition want the number 13 is negative, in France or in England, where in Italy it is considered a lucky charm? On the other side of the Alps, it is indeed the number 17 which is a bad omen. In question ? In Roman numerals, 17 is written XVII, the anagram of the Latin word VIXI, that is to say “I lived”… and by extension “I died”.

[…] The superstition regarding the number 13 has its origins in the Christian religion : it is linked to the Last Supper, when the twelve Apostles gather around Jesus. Judas, the traitor, increases the number of apostles to thirteen. From then on, the accursed number is associated with the pangs of Jesus. Since then, superstition has taken root in popular belief: to be 13 guests at the table would mean that one of them will die within the year” .

And the number 23 in all this?

As for the number 23, we let you watch the eponymous film with Jim Carrey. This is a particularly interesting film on the subject. He explains in particular that this number is prone to paranoia and seems find oneself in absolutely everything. Like a golden ratio, in short.

Knock on wood is a superstition that comes from -660 BC. JC. The expression originates from Persians. Followers of Mazdaism (an Iranian religion that owes its name to its main god, Ahura Mazda), the Persians believed in the protective power ofAtar, a genius of fire. This was manifested by wood, flammable organic material.

Why do we say “shit” to wish good luck? It seems that declaring good luck would bring bad luck for the success of an examination, an operation, etc. As Georges Planelles writes in his book “The 1001 favorite expressions of the French”, “the most probable version comes from a simple superstitious use“. Saying “good luck” might cause unhappiness and failure rather than success.

But no one really knows where this superstition comes from. It is believed to come from the theater and when you said “good luck” to an actor about to go on stage, it meant that the play was going to go wrong. The goal would be to say the opposite of the desired thing: “merde” in French, “break a leg” in England.

“The first leaf is for hope, the second is for faith, and the third is for charity; the fourth leaf would therefore be for luck. According to another legend, the first would bring fame, the second wealth, the third love and the fourth health. »

Rarethe 4-leaf clover brings good luck and this superstition has its origins in Christianity. “According to a legend, this good fortune would come directly from Eve. When Adam and Eve lived in paradise, Eve would have picked a four-leaf clover as a souvenir, and this religious connotation would have lent it its particularity as a lucky charm. »explains selection.ca