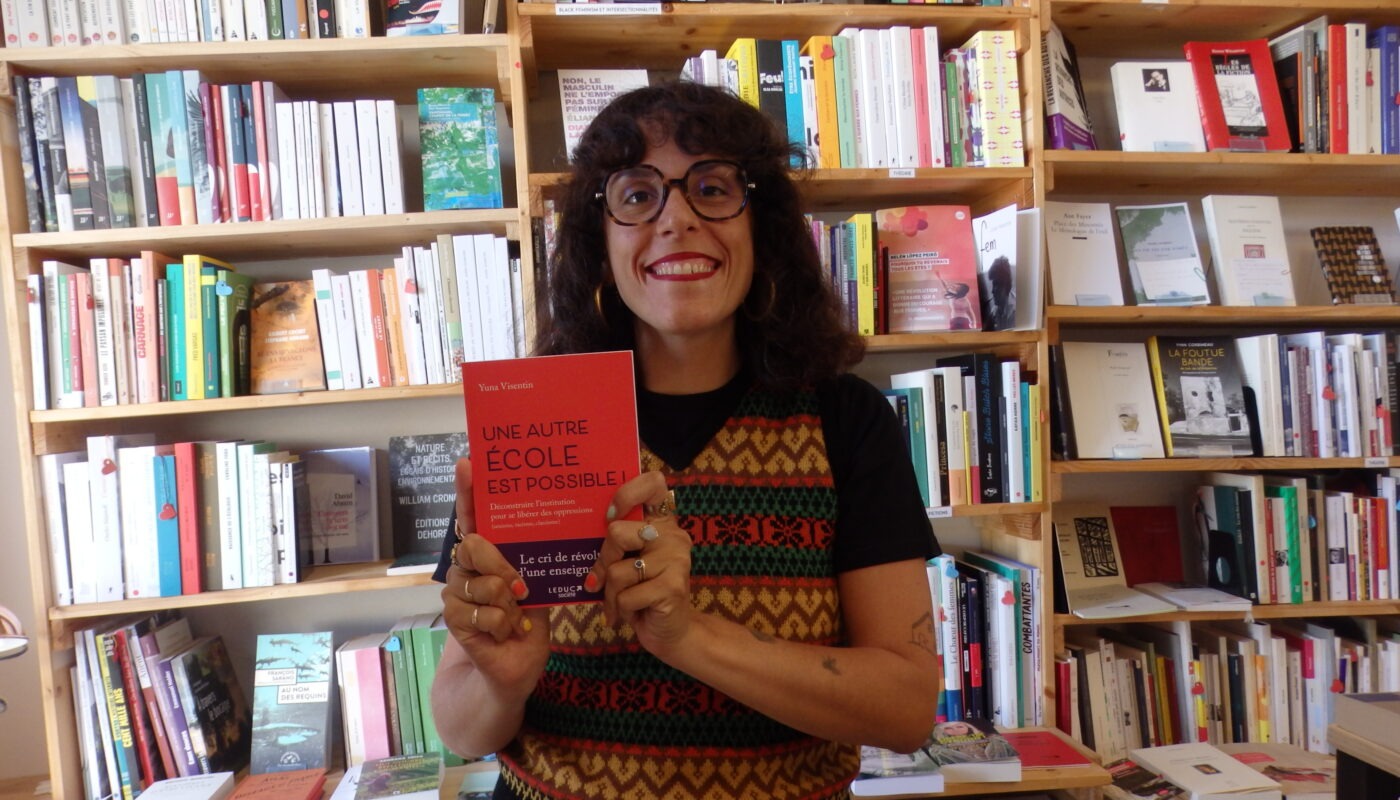 Hila: Awakening of the Witchesan ecofeminist fantasy novel by the author Yuna Visentin, takes you to discover the country of Scaër and the magic of the forest. Published at Kiwi editionsthis fascinating story deals with female emancipation against a background of witchcraft.

After considering “the possibility of a school” and proposing to repair the damage to our education system as shown in the article ” Yuna Visentin dreams of another school » (UnidiverseSeptember 22, 2022), commenting on his pamphleteer Another school is possible!the Rennes writer who lives in Brittany extends her gaze to society as a whole, the society of men which is also ─ it would be time to think about it ─ the society of women, and gives us today an astonishing novel of anticipation , which is part of the idea of ​​utopia, whose return to human consciousness we can only welcome.

Utopia, from the Greek οὐ-τόπος / ou-tópos, which means “in no place”, designates this improbable place that we do not know where to locate another dream. Hence the fact that the 19th century in particular, in the socialo-anarchist current, saw so many works celebrating the possibility of a world other than ours, of which we have not finished complaining; consider, for example, the Journey to Icaria (1840) by Étienne Cabet, portraying a different society, a phalanstery, as dreamed of by Charles Fourier, whose “passionate attraction” consists in freeing women from the tutelage of men while sexually promising them the peace of the warrior. Nevertheless, it was he who invented the term “feminism”, emphasizing the civic importance of women, not without some ambiguity, until Flora Tristan in her famous statement put the foot in the dish: “ Every oppressed person finds a being to oppress, it is his wife. She is the proletarian of the proletarian “.

It is at this stage, and in an extreme rigor under the romantic clothes, that Yuna Visentin approaches his utopian story, situating it in the Finistère town of Scaër, a city full of magic and beliefs which, etymologically, means Rift, which here has become the place of the banishment of women and their subjection to the Male. In her allegorical and fantastic text, she portrays the society of men and here is: ” Unable to master magic, men wanted to make it disappear. They proclaimed themselves sages, set fire to the trees and won the war against those they then called “witches”. Silenced, separated from their children at birth and forced to stay away from the forest, the latter were condemned to repent every day of being born women, to live in shame of their nature, and to comply with the laws. of the Book written by the first Sages. »

She encamps us in this novel, as leafy as it is substantial, with a young girl, named Hila ─ in the esoteric language of the book, it means Winter, the season which sees the man cut himself off from the outside world and from nature, to lock up the woman, decreed repository of evil and paragon of impurity, in a completely different phalanstery that has everything of a prison. Woman is in herself a being of sin because, in empathy with nature, she sets it up against men and threatens them. So any woman entering the forest must perish by fire, and this is the emblematic scene of the stake:

” Gabriel then lit the torch and turned to the witch:

– For you, the time has come. In the name of the laws of Scaer, I condemn you, witch. May all the demons of nature burn with you.

Everything went very quickly. At first the woman stirred, unable to cry out, but the pain from the flames burning her lower body was too intense and the fumes from the smoke made it difficult for her to breathe. She fainted, and all that was heard was the crackling of fire devouring the flesh. All around was calm and silent; even the wind had died down, as if it didn’t want to participate in the massacre. »

But what does she see this Hila, a fourteen-year-old girl whom her mother, seeing her wasting away between four walls, has, defying the taboos, walked through the forest where her whole adolescent body has regained its vitality and her face regained its colors, when now promised to be an angel of salvation, and perhaps the Messiah, she visits the streets of a forbidden city?

” From the open windows escaped all sorts of noises that gave each house its soul… The houses bent under the weight of their inhabitants, but at the same time there was an incredible vitality coming from the street, as if the people, the elements, the stones and the wood together cried out their rage for life. »

It is the key word, the engine of a story that could just as well be described as ecological, and which in Spinoza’s time would have been described as “pantheistic”. “ Nature is a temple “, said Baudelaire and all this romantic territory comes alive in a kind of universal harmony where nothing separates the human from the animal, from the flora and the fauna, because everything has a soul as shown so well, for his part, the Cuban novelist Rolando Morelli in his Stories never told (La gota de agua, 2022). ” Stories to resist », writes similarly Yuna Visentin, in which one cannot enter a dwelling without asking permission, where, in a permanent dialogue with the elements, one speaks with the walls, the furniture, the plants, when “the perfumes, the colors and the sounds respond to each other”. It is precisely in this “forest of symbols” ─ forbidden space because, as Hila’s father says, and who will denounce his transgression as a troublemaker: ” The forest is forbidden to women. It’s a haunt of witches » ─ that walks the one who will save humanity by her only innocent and pure presence of woman, definitively cleansed of the suspicion of witchcraft, and never again promised to the stake. The awakening of the witches is the promise of redemption, in this concern or this imperative to “repair the world”. The whole of nature becomes the house:

” Without a sound, she slid to the ground among the carpet of dead leaves. She absorbed everything around her, as if this was not her first discovery of the forest, but the return to a home long lost. Her thin fingers caressed the leaves: she caught them in her hands and made them fly around them. The leaves now surrounded Adel and Hila and formed a house. »

This feminist advocacy where women try to regain their rights and regain their place as human beings in a society where power is monopolized by men, self-proclaimed “Wise”, is also a great reflection on nature and preservation, also , of his rights. By ransacking nature as it tramples on the freedom of women, by burning the forests (and it will be noted that this belongs to our sad actuality), by carrying out, in the literal sense, the hunt for witches who must end up on the stake, man precipitates the loss of the planet and its history. Hence Hila and her friends stand up, with just anger, against those who hold power by relying on the Book from which they try to recompose or find the sentences that establish their power. Hence the fallibility of beliefs, the emanation of fanaticism, the concern to protect themselves against those they think are hindering “realization.” Except that the resistance is there, the people of the North, neglected and marginalized, are preparing for war ─ perhaps we will think of the revolt of the Red Caps which, in the 17th century, broke out on the lands of Scaër, or the famous Marion du Faouet“the whore with red hair”, from which the late Colette Hélard-Cosnier drew a moving piece in 1975 (P.-J.Oswald editions).

And the novel, which teems with always lively and gripping adventures, inevitably leads to war. Who was talking about submission and resignation? But Hila, the one who saw the women burn on the stake set up by the men, herself promised to the flames, is the quintessence of saving purity, because her gaze “ was full of a vibrant curiosity for life, an irrepressible urge to be part of the world, to love “. And that is obviously the key to everything: to love, to be able to love, to know how to love. And the resurgence of the old utopian slogan of 68: Make love Not War “. Here the war of the sexes, the quintessence of all conflicts.

Thus, Yuna Visentinafter having exposed the possibility of another school and another education, she intends to repair the world, rediscovering, perhaps unwittingly, the prediction of the cabalists who, faced with a universe of broken vessels (cf. David Shahar, The Palace of Broken Vases, 7 volumes, Gallimard), aspire to the providential being who will pick up the pieces, the famous Tikkun olam of Jewish mysticism which means “repair of the world”, and which is illustrated here, in the magic of the story and the marvel of the human adventure, this young Hila, portrayed by the novelist not as a Halloween witch, but as a good fairy of times of redemption. The girl and love. And as it is said, in front of the shards of a broken bowl: When will you stop to fix what others than you have broken? The repair of this failing and unbalanced world is therefore at the center of this strange and magical tale.

At the climax of the narrative, darkness seems to outweigh clarity: the sun was gone, leaving the earth in darkness darker than night » where we seem to find this dawn of humanity where the primitive saw in the twilight and the fall of the sun the end of all life. But in the middle of the pyre, Gabriel, torch in hand, seized Hila’s hand and waved it towards the crowd, shouting: ” This is the witch who will save us all “. Hila will not burn, the beneficial rain extinguishes the abominable fire, “ fresh as life reborn », ecofeminism triumphs, this is the end of the story. Thus is fulfilled the initial prophecy which announced that this young witch would drive out the magic of this world, repairing its breakage and its flaw through love, that of men and nature, in close communion.

Awakening of the Witches by Yuna Visentin