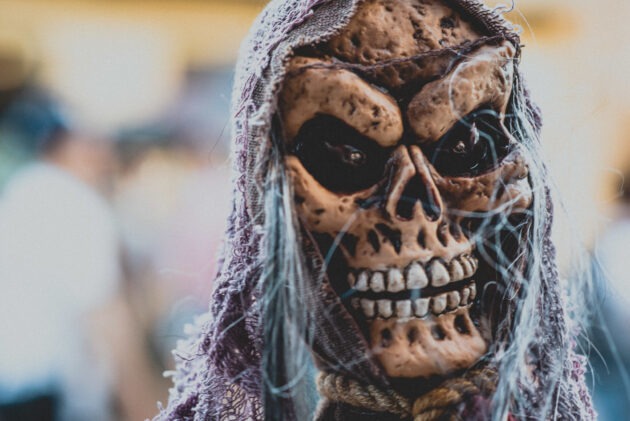 “Festivals of Alsace”, episode 6 – To pay homage to the past of the city and its myths, 10,000 people rubbed shoulders at the Witches’ Festival on Saturday July 16 in Rouffach around thematic stands, also attracting certain “modern witches “. Report at the heart of a festive tote of history, legends and beliefs.

A fortified tower protects Rouffach from the scorching sun of this late afternoon on Saturday 16 July. The folk music of the Alsatian group Quatr’Quart sets the air on fire in the main square of this village south of Colmar. The crowd is huge at 7 p.m., mostly made up of people in T-shirts, but also elves and witches. In the Middle Ages, the building facing the church was used as a prison to keep away women accused of frequenting the devil.

Since 1993, the Rouffach witch festival association has relied on the story of these fifteen women executed for witchcraft between 1585 and 1627 to organize an event around myths and legends. Didier Basse, secretary of the association and volunteer for 26 years, is posted next to the church where the volunteers eat:

“The event has evolved a lot over the years, there is no longer a specific theme. If we wanted to have an all-medieval party, for example, that would cost a lot of infrastructure. We choose original and very different animations and stands. »

In 27 years, the festival has become colossal for this village of 4,500 souls: more than 10,000 people have been welcomed and 200 volunteers have been active for 2 p.m. around the stands and activities for adults and children.

Around twenty stands of charcuterie, Alsatian wine, but also “magic potions” and magical outfits mingle between the streets of Place de la République and Place Clémenceau. The giant gnomes of the Compagnie des Voyageurs du Bord des Mondes, a show troupe from Loiret, cut the way and the little ones marvel.

Stéphanie, 42, accompanied by her husband Nicolas, talks about a childhood fascination with legends:

“My uncle lived in Zugarramurdi, a town in northern Spain known for its myth of the cave where sabbats would have taken place (a nocturnal assembly associated with demonic rituals, Ed). »

This myth was built on real history: in 1610, the court of the Inquisition in Logroño, a city in northern Spain, sentenced eleven women to the stake for witchcraft. A funeral director, she claims to have seen the film The Witches of Zugarramurdi “a dozen times” and to have a few books on the subject at home.

On the big stage, theConvivencia set plays his acoustic medieval music. Sophie brought her neighbour’s children back to try out the agility and memory games and an introduction to calligraphy in the afternoon. This fan of “everything related to witchcraft” regrets that this figure is only brought back to folklore: “It goes much further than that nowadays, there is clairvoyance, spirituality, the relationship to nature , all of this comes from witches”, develops the one who is a secretary-accountant in civilian life.

On Place Clémenceau, the DJ sings music from the pop duo LMFAO, projecting the atmosphere quite far from the medieval universe. Julie is all in black, an inverted moon on her forehead. Her friend Mathieu, scarred with black paint, introduces her cheerfully: “This event is like the National Day for her! » The 27e edition of the Witch’s Day is, however, a first for this 26-year-old engineer. The opportunity to be “herself” in public: “In my job in a chemical plant in Mulhouse, I can’t dress like that,” she admits.

She says she identifies with the witches of ancient times: “These are women who were burned because they dared to break out of the mold, to do things differently,” says the young woman. Six years ago, she began practicing “rituals” for well-being:

“My studies were difficult, I took a gap year where I worked as a facilitator. It allowed me to reconnect with nature and get interested in astrology, herbal therapy and natural healing. Even if it has no real influence, it helps me organize my life”.

Louna, who is queuing at the sausage stand in the other village square with her group of friends, also says she uses certain remedies. It lists several practices, such as herbalism, which consists of the preparation of medicinal plants, aromatherapy, which is the use of essential oils of plants for medicinal purposes, and lithotherapy, the use of stones for care. physical and mental.

Certain plants and essential oils are well used in the preparation of certain herbal medicines, as an active substance or as an excipient, according to the National Medicines Safety Agency (ANSM). On the other hand, no scientific study has yet demonstrated any effect of the stones on the human body. “It is not necessarily effective, but it is done with the desire to treat”, specifies the young woman.

Long relegated to the imagination of the lady with warts and the hooked nose, the witch wants to reclaim a positive modern dimension of her “power”. The young preparatory literature student converts her friends to a feminist reading of these practices:

“Machismo has caused witches to be condemned when they were often connoisseurs who knew how to use plants. These rituals are more about healing yourself as a woman. »

“There are more modern discourses in the literature that highlight the Inquisition against witches as feminicides,” says Sarah, 20. Decked out in braids and Celtic symbols, she waits with her mother Murielle in the queue where the trail of the strange is held, a sort of haunted house outside, set up in the old fortifications of the city.

During an in-depth discussion, interrupted by the gestures of a volunteer disguised as an executioner, she says that her sister practices wicca, the “religion of witches”. This religious movement appeared in the XXe century has been taken up by certain feminist movements: “The most important thing about witches is the sorority“says Sarah. She even tried to join a coven (a group of witches) in Strasbourg, but without success: “It’s a very closed environment, you need someone from the inside to bring us in. »

On the main stage, at 10:15 p.m., meditative percussion and clear chants resound. The rings of fire spring from the hands of the dancers of the Ark in Salt, at the same time as the cries of the public. The troupe of dancers from Charente-Maritime impresses with their precise drawings of fire.

Late at night, the spectators gather under the tents to eat. Pascal, along with his wife Marianne, are both interested in witch stories. Pascal in a slightly more dedicated way: “I created my own talking circle in my living room. We make shaman songs and treatments. Now we are 72 people to meet every Friday, ”he says, holding out a business card. He says he “feels the energies” and in particular can guess the “intimate traumas of people”.

Even if there are devotees, most are not really interested in the theme of the party, like Hervé, 40, who came with his group of five friends:

“We looked on Wikipedia before coming because we wondered why the party wasn’t called the wine fair. It’s true that there is rarely an ax throwing at a wine fair…”

Elena, Théo and Romain, all in their twenties, arrived from Normandy a year ago and were expecting a “little guinguette”: “At home, we don’t have that kind of party too much. It’s more in the east of France that we have themes like that, it’s surprising,” says Théo.

Near the end, the participants concentrate on Place Clémenceau to continue dancing like in a nightclub. Mélodie Weber, the creator of “Fée moi rêver” carefully repacks her miniature dwarfs and her mushroom pens made from recycled materials. There is almost nothing left: “People were very moved by the universe. After two years of Covid-19, I think everyone needed this, ”says the designer.

All the episodes of the summer series “Festivals of Alsace”

An evening with the modern witches of Rouffach