The tourist attraction in Niagara Falls, Ont., said the move to a facility that keeps other walruses in captivity was for the good of Smooshi and his offspring Koyuk. In addition, the park revealed that it had reached an agreement with one of its former animal trainers, Phil Demers, who later became an animal welfare … Read more

A lawyer, a filmmaker and a scientist are among those who received a notice, which has identical wording except for the names. Notices indicate that recipients are not permitted to enter the property known as Marineland of Canada, Inc. and can’t get in at any time and for any reason. People who receive such a … Read more 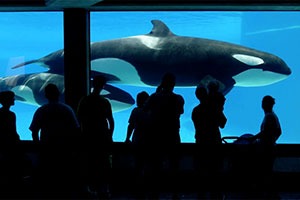 Source: The Canadian Press / Scott Dunlop Marineland barred access to its facilities to a number of people, some of whom have never visited the Niagara Falls tourist attraction, days before the season opened. A lawyer, a filmmaker and a scientist are among those who received a notice, which has identical wording … Read more

Marineland banned a number of people from its premises, some of whom have never visited Niagara Falls, Ontario, a tourist attraction, days before the facility opened for the season. A lawyer, a filmmaker and a scientist are among those who received a trespassing notice, all of which are written the same except for the names. … Read more