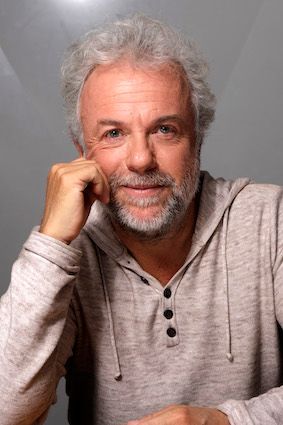 SHE. Where does your interest in shamanism come from?

FREDERIC LENOIR. During my doctorate in sociology, then as a researcher at the EHESS (Ecole des Hautes Etudes en Sciences Sociales) on religions, I became interested in all forms of religiosity. Shamanism is considered by historians and anthropologists to be the first religion of humanity. My personal interest deepened later, after meeting shamans and witnessing some pretty impressive rituals.

SHE. What is a shaman?

FL The word comes from a Tungus tribe in Siberia who named the medicine man of a tribe, and was disseminated in the 18th century by Western ethnologists. The word “shaman” defines individuals who serve as intermediaries between a human group and the invisible world. The shaman connects with nature spirits in an altered state of consciousness induced by trance.

SHE. Is it a form of animism?

FL Yes, it is based on the belief that a spirit, a vital force, animates living beings… It is a widespread practice on all continents which has survived prehistory. It’s extraordinary, since it allows us to have living witnesses of what the religiosity of humanity was like thousands of years ago!

SHE. Who becomes a shaman?

FL Unlike most historical religions, where men perform all cultural functions, shamanism can be led by either a man or a woman. The only condition is that this person has a gift, that of seeing spirits, the invisible world. Being a child of a shaman does not guarantee having this faculty in itself.

SHE. How do you know if someone has this gift?

FL Since childhood, some individuals have seen spirits. Then they are chosen by the tribe and must put this gift at the service of their community during rituals and healing ceremonies. There is a social dimension to traditional shamanism, which is why it is said to be religious.

SHE. What is the difference with a priest, a rabbi or a pope?

SHE. How to define it?

FL It is an altered state of consciousness: the mind lets go, so does the control, but the consciousness remains. The individual in a trance is partly disconnected, to be connected to this so-called invisible world.

SHE. What do neuroscientists say?

FL Without being able to comment on the source of the trance, they demonstrated, in particular during several experiments with Corine Sombrun, that, in this state, the areas of the right brain (emotional, intuition, creativity, etc.) are activated, while those of the left brain (logic, mental, rational…) are not. In medical imaging, it’s very clear!

SHE. Is it the sound of the drum or the hallucinogenic plants that induce the trance?

FL Traditionally, the sound and rhythms of the drum are what get the left brain off the hook. Dance, the repetitive movements of the body, also helps to destabilize the mind. Then shamans discovered that hallucinogenic plants allowed them to contact spirits and obtain information on the healing power of plants. I saw this in Peru in 2019, accompanying a Peruvian shaman, Juan Flores, who was going to pick plants that the spirits had shown him during a trance under ayahuasca.

SHE. Trance is no longer the prerogative of neo-shamanism…

FL No, and this is one of the keys to its current success in the West. Some seek to live a personal experience that can upset them, even cause them an emotional shock, but without their having a gift. It is difficult to go into a trance to the sound of the drum, and those who experience neoshamanism most often use hallucinogenic plants, peyote or ayahuasca [interdites en France, ndlr]with which they are almost sure to have visions.

SHE. Is this practice a twisted conception of traditional shamanism?

FL I will not make a value judgment. This is another thing. Traditional shamanism is at the service of a community, it fulfills a social function. Neoshamanism has none, it simply allows you to live an individual experience and expand your field of consciousness. We are here on a spiritual quest, with a strong psychological dimension, more than in religion.

SHE. What do those who have been there say?

FL Some say they have experienced the sacred. They say: “I had an incredible journey, I saw God, the light, I was flooded with love…” Others understood things from their own history. Testimonies are sometimes upsetting… but also frightening, in the event of “bad trips”, against which we must warn.

FL Some people can take months to recover from a bad experience, for example, when latent schizophrenia is revealed on this occasion. I have known some who remained permanently anxious after an obscure journey. It is therefore a question of being careful, and accompanied by people who know precisely the dosage of hallucinogenic plants… And of listening to your intuition, if ever a little voice tells you that you should not go there.

SHE. Some also say they are positively transformed…

FL Because we let go of the mind, the ego… it’s a spiritual experience. Some no longer look at the world the same way, they are no longer afraid. Others say: “I saw myself die, and then be reborn”…

SHE. You were not tempted…

FL Nope ! First, because I have the intuition that I risk having a “bad trip”… And also, because I have lived, without taking plants, very strong spiritual experiences. For example, an overwhelming experience of contemplation in nature: my field of consciousness was totally expanded, I was in communion with the elements, it was incredible. Why then take plants that can have negative consequences?

SHE. Is there also the idea of ​​coming into contact with the dead?

FL Yes, when you connect with spirits, entities, you don’t know what will happen. People tell of having come into contact with an ancestor who delivered a message to them…

SHE. Some declare themselves “shamans” in France… How to sort out charlatans?

FL Discernment is difficult. I would tend to trust more those who have been initiated and trained for a long time in a traditional universe, with a recognized shaman who would have transmitted his culture, developed the gift, refined the visions… and verified that this gift does not It’s not an illusion or an autosuggestion. Even if you can have a gift without having lived ten years in Mongolia! When there’s a lot of money involved, it’s suspicious. Ditto when there is a form of indoctrination, encouragement of dependence vis-à-vis a shaman, a drug or a plant. In these cases, you have to leave.

SHE. Can science elucidate the part of mystery and magic of shamanism?

FL The great psychologist Carl Gustav Jung worked all his life on this question of the connection of the mind to the “invisible reality”. He founded this theory with physicist Wolfgang Pauli, one of the founders of quantum physics. He won the Nobel Prize in Physics in 1945; he had demonstrated that, when physicists observe the same molecule, the gaze of the observer can influence the experiment and change the nature of the results. Faced with these synchronicities between the spirit of the observer and matter, he put forward the hypothesis, working for twenty-five years with Jung, of the existence of an “invisible reality”, where the spirit and matter are connected. This hypothesis could explain the phenomena of clairvoyance, divination, shamanism… called paranormal. But, to accept it, one must postulate that there is another level of unseen reality, which many scientists refuse to do. The Cartesian and materialist resistances are immense!

SHE. The current craze also speaks of the need to reconnect with nature?

FL Yes, because the ecological crisis makes us aware of the importance of this link to nature. In the Cartesian vision, it is desacralized. For Descartes, it is only a sum of resources, of materials, which one can use, plunder, dissect. However, we have since realized that nature is a living organism, with complex ecosystems, that trees communicate with each other… This new desire for a shamanic experience relates to that of reconnecting with the living and to more bigger than yourself… I who live in the countryside and feel the energy of nature and the telluric forces, I confirm! We all have a vital need.

SHE. How to interpret the quest for his totem animal?

FL It is a question of rediscovering our part of animality which has been repressed. Jung would say that it’s our unconscious, too tamed, whereas it’s a force that needs both to express itself and to be channeled.

SHE. Why does it feel good?

FL Because it is a question of reunifying our conscious and our unconscious. For Jung, most modern illnesses and neuroses stem from the fact that the two have been separated too much, when they should be brought into dialogue. Shamanism allows, via the modified state of consciousness, to connect us to our unconscious and to hear its messages, its information, its premonitions… Things that enlighten, transport or warn. At the same time, one can also be devoured by the unconscious! This is why it is necessary to be guided by someone experienced. But we have gone too far in the purely cerebral. To flourish, the human being needs to find a healthy dialogue between the head, the body, the emotions and the imagination.

Why do we have to awaken the shaman who lies dormant in us? Frédéric Lenoir enlightens us – She