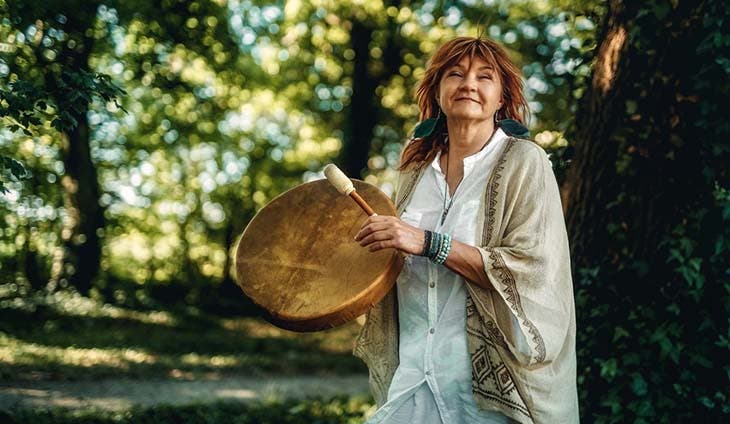 And why not ? But first, we take stock of what challenges, surprises, arouses mistrust sometimes…

The word shaman has its source in “saman”, from the Tungus language, formerly spoken in North and East Asia (in Siberia and part of China). Saman means “priest, doctor” but also “he who moves, shakes himself” because he is crossed by spirits and shakes himself to let them down. Shamanism evokes a way of being in connection with nature, an aptitude to accompany on the path of healing, the body and the spirit. This spirituality, tinged with magic, articulated around rituals, is embodied by shamans who are usually said to be born twice, the second time being that in which they went through a life ordeal which revealed them, often after have come close to death. It is difficult to date the origins of shamanism, especially since we can even guess representations of it in the paintings found in the caves of Lascaux! We can consider that shamanism is present as much in Siberia, in Central Asia, in Mongolia, in South Korea, as in America or in Africa.

The tools of shamanism

The place of practice is often a yurt, a symbol of verticality, of the link between the underground world, the earthly world and the sky. The path being traced between these three planes by the smoke coming out of the yurt. In order to put himself in conditions of receptivity to shamanic rites, the shaman can invite to combine isolation, fasting, taking psychotropic drugs. Decoctions of plants, 100% natural, will allow you to better connect with nature and more precisely with the form, most often animal, in which you project yourself. This form will modify the perception of the surrounding world. The fumigation based mainly on sage, cedar or even hay, makes it possible to purify the atmosphere of the place of practice. Can then begin the “journey”, of which the shaman is the initiator. This inner journey connects with previous traumas with the objective of freeing oneself to no longer live one’s earthly life through them. We then also connect to our dreams, both good and bad. For the latter, the shaman proposes to make a dream catcher, “dream catcher” (of Native American origin), intended to imprison them to give access only to dreams considered useful. The dreamcatcher is made of natural elements (wood, feathers, leather, silk). It consists of a central ring around which are arranged the accessories and strings intended to capture bad dreams… The drum, the shaman’s communication tool during the ritual, leads to a trance. It can also give way to a rattle (especially among South American shamans) and illustrates the connection between the earthly world and the spiritual world. The sphere of the rattle being the universe; the seeds inside, the souls of the ancestors; the handle of the rattle in the hand of the shaman establishing the link between the two. And to come into contact with the entities present to him, the shaman enters into an ecstatic state with the ultimate goal of taking care of his community.

To understand what a shamanic retreat consists of today, we followed Anne Cazaubon. This former journalist is a coach, speaker, host of family constellations. She defines herself as a “bitumen shaman”. “I like the idea of ​​introducing shamanism into the city, around a mandala with leaves, a solstice ritual in the heart of Paris. The principle is to always bring an element of nature such as a shell, which evokes water, the wooden talking stick, for the forest, the drum with animal skin, sage for fumigation. Shamans will plunge into their own darkness so that they can then plunge into that of others and restore harmony. We come to see the shaman when there is something that blocks and repeats itself. A shamanic retreat is a path of personal development. During a retreat, the song of the drum reconnects to the drive of life as it is struck in a rhythmic manner reminiscent of its own heartbeat and that of its mother. Listening to the drum is saying a second yes to life, already in utero”, concludes Anne.

First of all, by definition, we withdraw into a space dedicated to shamanic retreat. Without prompting, without a phone… We sit in a circle and pass a talking stick that sanctifies speech. “The rule is that you don’t interrupt the person holding that stick. We come to deposit our truth in this place and it is sacred. Then there is a space for setting in motion with a lot of corporeality, medicine dance because only the body can speak, with a cry, a tear. The shaman is there to guide, to help to alchemize but above all not to do in the place of the other. Anne introduces art therapy, spontaneous drawing, constellations. “I always practice the constellations which physically and symbolically reposition everyone in their family legend. Finally, there are rituals such as: placing in the ground, returning to the fire, laying down a burden…, to give form to what one has inside oneself. »

Check that your state of health is compatible with the proposed activities, especially if there is a fast and that it will be well accompanied. Read reviews, ask veteran practitioners. “Listen on Youtube, on a podcast or on social networks, what the person who organizes the retreat says. So pay attention to your feelings. More objectively, make sure this person insists that what they are offering is not “the” truth but “their” truth. Check that the retreat provides speaking spaces. The therapist must imperatively be supervised, do not hesitate to ask him the question before any registration. He must not promise you that he will ‘cure’ you, but guide you towards your inner healer”, insists Anne. The promised benefit? That the person will come out of retirement more peaceful, reconnected to their own inner resources and those of the world around them. Physically, she may feel lighter, as if the weight on a tense area of ​​the body has melted away. An integrative retreat, amazing to experience as an opportunity to (re)discover yourself and regain self-confidence…

Read also Why is it important to listen to music every day?

What you need to know before going on a shamanic retreat


You can find our social media pages here and other pages on related topics here.https://nimblespirit.com/related-pages/