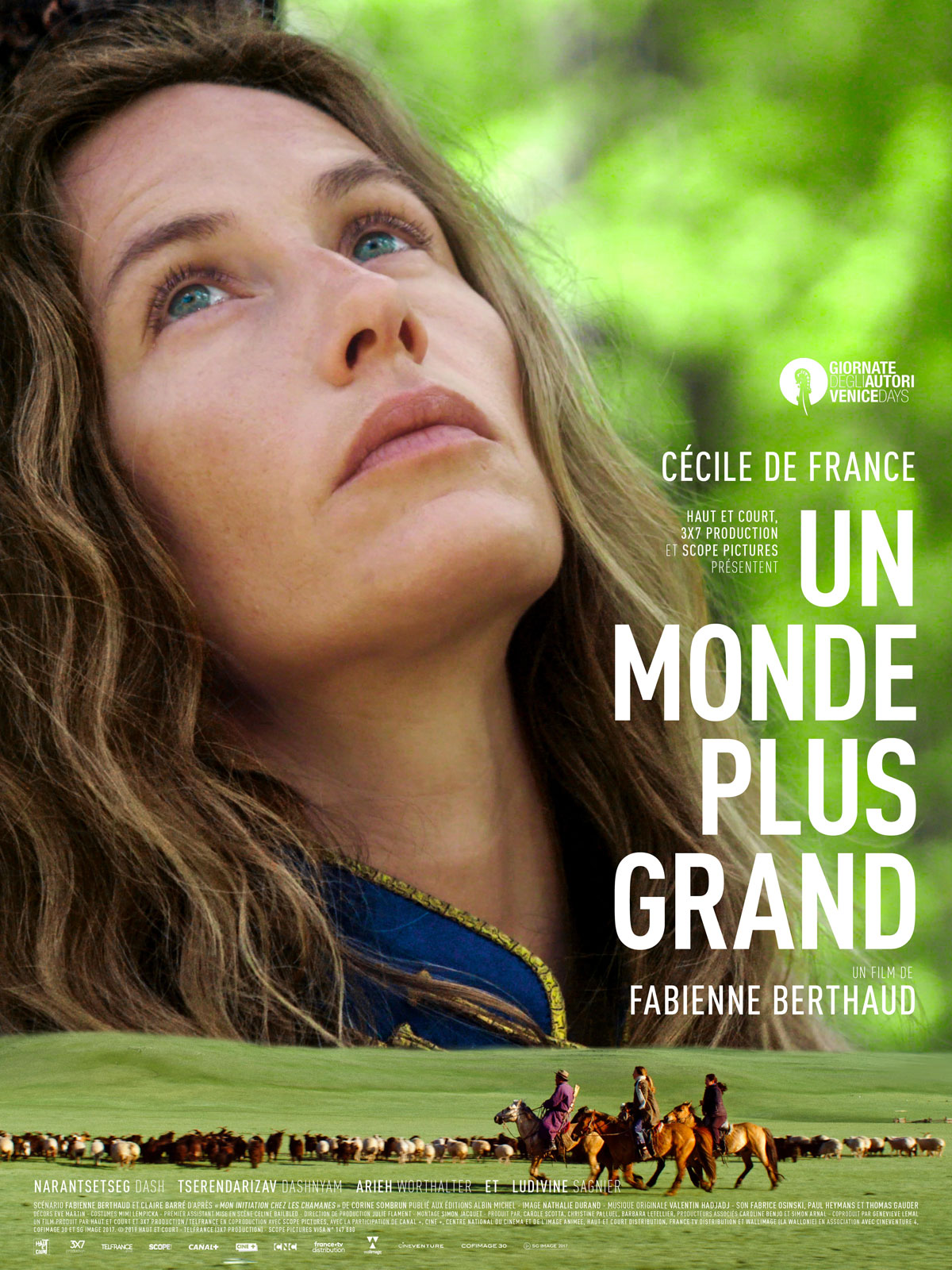 Trance. A feeling of leaving his body. Uncontrolled tremors. A tenfold strength… the testimonies of individuals who have experienced a shamanic trance are as surprising as they are incomprehensible. In the film by Fabienne Berthaud “A bigger world », we see a woman in a trance hitting herself while howling wolf cries during a shamanic ceremony.

Corine Sombrun during a trip to Mongolia in 2001, when she was reporting on shamanism in Mongolia. At the first beats of the shaman’s drum, she is seized with a trance that will last two hours. Shocked by this unexpected event, she returns to Europe with the determination to understand what happened in her brain. She therefore trains herself to induce trance by herself and proposes the term “self-induced cognitive trance” to describe this particular state, detached from all traditional rituals.

“During a self-induced cognitive trance, the perception of oneself and of the environment is modified,” explains researcher Olivia Gosseries, co-director of the Coma Science Group of the GIGA-Consciousness unit in Belgium.

Read also: This is how hypnosis transforms our brain activity and our perceptions. A esoteric method that only works – if it really works – on weak minds? In reality, hypnosis has objective effects on our brain. We are now certain.

SELF-INDUCED COGNITIVE TRANCE: A UNIVERSAL CAPACITY OF THE BRAIN?

We might be tempted to believe that the trance state is reserved for a few Mongolian shamans. In reality, each of us could access it, or almost. By testing a soundtrack with students of the Beaux-Arts in Nantes, Corine Sombrun allowed 80% of them to enter a state of trance on the first try, and 90% on the following ones. This first step in testing self-induced cognitive trance on a large audience suggests that it could be a universal brain ability.

Subsequently, a research program was carried out on 1000 volunteers. Again, 90% of participants were receptive. In other words, 90% of them have seen their altered state of consciousness. But how did they know they were in a trance state? “We know it,” replies Dr. Gosseries, who has experienced this state. “You feel your body in a different way, you have unusual perceptions, sometimes visions appear, emotions emerge”.

The poster for the film “A Bigger World” by Fabienne Berthaud.

To access this trance state, there are different ways. The first times, you generally have to rely on a trigger that appears when listening to the sound loop created by Corine Sombrun and Dr. Elie Lequemener. “Then you can learn to enter a trance on your own: by vocalizing or making certain movements for example”, quotes Dr. Gosseries. Everyone has to find what works.

Science and trance, from disenchantment to scientific research
Corine Sombrun founded the TranceScience Research Institute in 2019 with neuroscientists from the CNRS and the Catholic University of Louvain in Belgium. The TranceScience Institute collaborates among others with researchers from two Belgian laboratories brought together under a unit, the GIGA-Consciousness, as well as with the CHU of Liège. More specifically, it is under the impetus of two Belgian researchers that studies on the subject are emerging: Dr Olivia Gosseries, qualified FNRS researcher and co-director of the Coma Science Group of GIGA-Consciousness and Dr Audrey Vanhaudenhuyse, scientist at the University Hospital of Liège and director of the Sensation & Perception Research Group of GIGA-Consciousness.

WHAT HAPPENS IN A BRAIN IN SELF-INDUCED COGNITIVE TRANCE?

Neuroscientific studies on volunteers in a trance began three years ago. They began by observing Corine Sombrun’s brain in a state of trance.

“At Corine, the electrical signal spread differently,” says Dr. Gosseries. “At the front of his brain, it was amplified, implying heightened internal awareness. But at the back, the signal was diminished. Being in a self-induced cognitive trance would therefore modify the functioning of the brain…and the state of consciousness. 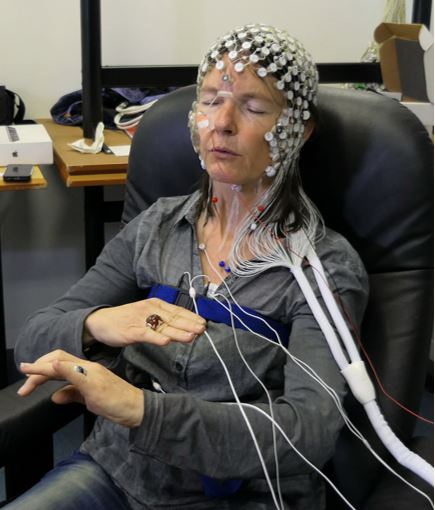 The team of neuroscientists wanted to test these results on a cohort of volunteers. The brains of 27 people in a state of self-induced cognitive trance were studied. In addition to encephalography monitoring using electrodes placed on their skull, other parameters were recorded: heart rate, breathing, eye movements and temperature. The analyzes of this study are still in progress and promise to be enlightening.

The self-induced cognitive trance would therefore be a potential to which we all have access, but which we do not solicit or little, at least not voluntarily. If the brain has this ability to change its state of consciousness, what use can this ability be?
Is there an evolutionary advantage to practicing trance?

The research is in its infancy, but it is showing great promise. One detail is of particular interest to neuroscientists: during trances, some people report a decrease in their pain. The team has started a study on this subject on volunteers. The latter will be subjected to painful stimulation targeted at the wrist during a state of trance. The objective measurement of pain will be compared to their subjective feelings. If trance proves effective against pain, it could become a powerful medical tool to relieve some patients.

The team of neuro-researchers has also started research on the effectiveness of trance as a post-cancer therapy, thanks to the support of the Belgian Cancer Foundation and Télévie. This study will allow 120 volunteers cured of cancer to choose between self-induced cognitive trance, self-compassion meditation and hypnosis. The latter follow sessions of the practice of their choice for a year. There is also a control group of 40 participants who did none of the exercises. “We hope that self-induced cognitive trance can help these patients in remission to manage their fatigue, their pain and their quality of life in general, in the same way as hypnosis and meditation”, specifies Dr. Vanhaudenhuyse. It will be necessary to wait three additional years before the first results of the study.

Even more surprising, and being studied in Marseille (Epileptology Department of the Timone Hospital) and in Geneva (Clinique Belmont): trance could have applications in psychiatry, in patients suffering from non-epileptic seizures psychogenic.

In view of these applications, real or potential, the question is no longer “why does trance interest scientists so much” but rather “why did it not interest them earlier”. In the West, it has long been associated with a psycho-pathological disorder.

Spontaneously, the images associated with trance are those of possessed, frightening people. “From a scientific point of view, his study is the logical continuation after having worked on sleep, then coma, hypnosis, and finally meditation. 50 years ago we said that consciousness was a subject of study reserved for philosophers. Today we are studying it scientifically”, emphasize Drs Gosseries and Vanhaudenhuyse. “We are only at the beginning! »

Take the example of meditation. Nowadays, this practice is totally democratized. It comes in the form of podcasts, books, courses. Until recently, it was considered mystical or even obscure. Hypnosis, on the other hand, has found its way into the offices of certain clinicians. Would it be weird to see the emergence of self-induced cognitive trance among alternative therapies?

If it is accessible to almost everyone as early studies show, why not give it a try?

In interview given to France Inter in 2021, ethno-musician Corine Sombrun confided: “Finally, the images that appear during a trance are no stranger than the images that appear in a dream. When we tell someone that we dreamed of being a bird, no one replies that it is impossible. Trance is the same: the feeling and the images that pass by are very unusual in our ordinary state of consciousness, and yet the experience is very real. »

Trance, hypnosis, meditation: what are the differences?

Self-induced cognitive trance, meditation, and hypnosis all induce an altered state of consciousness, but the paths to getting there are different. For example, trance induction is often done through bodily movements and/or vocalizations. While meditation can be done by focusing on the breath or an object. The similarities and differences concerning the underlying phenomenology of these states are however still unknown. A subtle nuance that is the subject of studies to better understand the effects of trance on the brain.

Also discover: Can the soul of a dead person really possess the spirit of a living person? If some people are convinced that an entity, human or not, alive or dead, replaces their minds, their practices are generally perplexing. But science reveals brain changes during these rituals.

Pain, stress, and if trance helped us to live better?