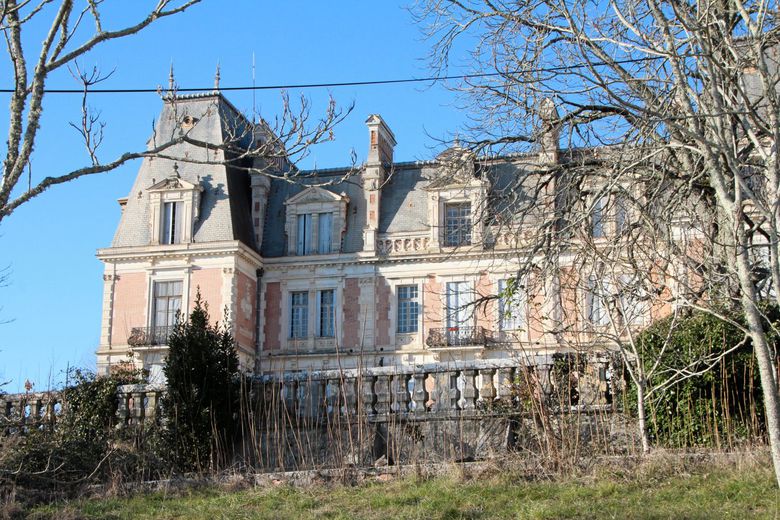 Cyrille Adam celebrated his 70th birthday in prison. Taking themselves for a descendant of an Indian chief, disciples of his teaching denounce sectarian excesses and rapes. He disputes everything.

“We don’t say ‘no’ to Loup Blanc, no one says no to him, he’s our master, he’s God! And we were afraid of him, women and men alike.” The tone is serious, the speech thoughtful. Aurelie

puts down his cup of tea. This young forty-year-old from Languedoc speaks fluently, agrees to evoke for the first time her years spent under the influence of the Gard guru. Until she finally detaches herself from it and now accuses him of having abused her body and her mind. Under the pretext of tantric work aiming at perfect sexual harmony and without, therefore, being able to say “no” to the shaman. “You need a photo and a cover letter to follow his teaching. He was the master of karma, he plays on permanent guilt, he abuses you and passes it off as spiritual work,

she analyzes. It seems crazy to me today to have believed in it, a guy dressed as a painted Indian, who makes 200 people dance in a trance and who rides in the Porch… But in the group everyone believes in it”. She smiles. Pauses. and cowardly: “He’s a businessman, an impostor who abuses people and especially women, I speak to prevent it from happening to others”. But who is hiding behind Cyrille Adam, nicknamed White Wolf, the pseudonym he uses for his shamanic activities? Since his arrest by the specialized services of Caimades, the assistance and intervention unit for sectarian aberrations, in mid-December, this massive man sleeps in the prison of Nîmes where he has just celebrated his 70th birthday in spite of himself. Here he is decked out with a series of indictments that he disputes from the bottom of his cell:rape and abuse of weakness on people made vulnerable by its influence . These charges are brought by agroup of complainants who had alerted the Nîmes prosecutor’s office

Based in Sumène in the Gard

For Cyrille Adam, everything was going for the best in recent months, despite the pandemic. Based in Sumène (Gard), at the foot of the Cévennes, where he has a beautiful house filled with many trinkets, he continued to give karmic healing courses at the Château de Granès, in Realville, in the Tarn-et-Garonne that a faithful, ex-supermarket boss, had financed it in 2000, before it was sold and now rented. He went there in a Porsche, his pleasure. Then he supervised the progress of the work in the new building of 600 m2 where he wanted to live and set up his new teaching center.

“A guy dressed as an Indian, who makes 200 people dance in a trance and who drives a Porsche” It is located in Prats-del-Mollo, in the Pyrénées-Orientales, where the association “Les amis Du peuple Debout”, responsible for the well-being of the guru who found Sumène too humid and who could no longer “regenerate ”, was able to acquire, in 2020, for €900,000. Sometimes at the cost of reminders and insistence on the students, as in this email from the tribe entitled “funding” that we consulted: “Some will say that we are still asking them for money, but HIM gives us so much, he works day and night and connects the ceremonies” is it written. Each had to, in addition to the calls for investment, give, for example, a €100 green note better for energies, to finance part of this new place. Large sums of silver and gold

“We were queuing to touch his feet” There are also ten-day summer courses in Granès, charged at €1,500, where you sleep on mattresses on the floor and follow amono diet, a little rice, grass juice or grapes. We also drink tobacco

, “it smashes, it cuts the body, for the ritual where he arrived dressed as an Indian or a condor” testifies the former student. According to our information, in the middle of the 2010s, the client file may have exceeded 300 people from France, Germany or Italy.Followers got into over-indebtedness and still are . By participating in addition, for some, instays in Peru billed €3,000 to initiate each evening with the master in taking Ayahuesca

, a powerful hallucinogen. Added to this is merchandising: the shaman’s books, his albums where he plays the drum and sings, or even his perfumes and his photos… “And donations for his associations and of course for his birthday and if we don’t have can’t afford it, it’s our fault, we have a problem with the money,” says Aurélie. Which reminds us that it is not easy to approach the master who is enthroned in his chair above the students: “People came to greet the empty seat as a sign of veneration or submission… And when he was there, we stood in line to touch his feet, we arrive on our knees, we leave on our knees without turning our backs on him” reports the former faithful. Sandra

also out of this hell, sums up: “He doesn’t do his shopping, not his housework, we cook for him, we wax him…” “Sitting bull came to talk to him…”This flourishing small business to his glory, Cyrille Adam shaped it all his life. Son of a medium mother, he was concerned from his childhood spent in the Oise to know how others thought. His gifts would have appeared at the age of 7 years. He first poured into meditation, magnetism and “harmony-therapy”. His stage name is then Hindu:

. “And then one day during an initiation, in 1998, he tells us that Sitting Bull came to speak to him, to tell him that he was a great Indian chief, that he had a red cloud above his head and that he was the best in the galaxy… recalls, ironically, a former follower. Some left saying: “he unblocks”. For us, it was Ahimsa, but he said: “No, Ahisma is dead, it is White Wolf!”

He will therefore now be a shaman, with Indian dances, meditation, collective trance… Indian folklore that seems harmless and ready to smile for an outside gaze. “But we had an army general, a judge, an auditor and doctors…, lists Aurélie. You say to yourself: “These are intelligent people, you can’t be in a sect.” , according to those close to him, Loup Blanc regularly criticized gurus and other sectarian phenomena, “and we said to ourselves how lucky we are to have a real master”, recalls a former student. To complete this picture of supposed influence, there is also the inevitable isolation of the follower denounced by the plaintiffs. “For example, we must not go to the swimming pool or to the cinema, because we are too close to people, otherwise we will take their karma and Loup Blanc then takes the karma of all the students, reports Aurélie. And then, he says that our friends, our family can’t understand, can’t hear, that they’re going to talk about a cult. He then tells us: ‘You have to choose between your friends, your family and me if you want to rise.'” His family alerts Miviludes This woman ended up only seeing people from the group and her family, worried, alerted the Miviludes (Interministerial Mission for the Fight against Sectarian Aberrations). Cyrille Adam, “as impressive as Joe the Indian in Tom Sawyer”, laughs after the fact a former follower, speaks of him in the third person, holds conspiratorial speeches, antivax and even speaks of the 3rd world war and the end of the world. It terrorizes as it reassures.But his cute sin remains the

. If you succumb to the master, you must above all not resist. His website in the chapter “Before you come”, indicates it moreover: “If your gaze meets his, dive into it and you will be sucked into another reality, you may see the Universe, feel the Love Unconditional, you will be bathed in a bath of Divine Love, you will feel the Fire of Grace rising within you…”, can we read there in particular. Should we separate the man with the described insatiable sexual appetite – which he maintains with decoctions and other invigorating herbs – from the spiritual master? He does not deprive himself. “I was captivated by the gentleman’s acting, the influence of his words was immediate, he captivates and inspires fear at the same time”, describes Sandra.

She entered teaching with a close relative and remained there for six years. She passes the grades of the “Spiral of life”, from 1 to 7, then from 8 to 14, but, at the same time, an ambiguous email arrives where the master explains to her that he dreamed of her. “The following initiation, during an act of communion where he gives the bread like Jesus, he began to look at me intensely,” she continues. “Your soul said to me: ‘Teach me to make love'” Until he declared his spiritual flame to her: “I dreamed of you, your soul came to see my soul in a dream and she told him: “Teach me to make love”, she says to him, reports this framework in the territorial function.

“He explains tantrism to me, I take it very, very seriously and I see in it the opportunity for accelerated spiritual evolution.” For three years, she claims to have had a few sexual relations “where you have to say mantras at the same time”, to have been often asked but to have waited a lot. She also received salacious emails like these photos of the master with his penis erect. Above all, like others, she is struck by Sadhana: she is not entitled to other partners, “because it damages the purity of Loup Blanc, it must be preserved, it makes you feel guilty”. For two and a half years, she follows this precept. “I was naive and one day, I told him that he had gone too far, he threatened me, she accuses. For me, there was psychic abuse, he can say that I was consenting but I was in a context with a man whom I consider to be God. And then, other plaintiffs did not know why they were going to his room… I was taken in like a rookie by a charlatan, it was more legs in the air than spiritual awakening.”

She describes her attempts to leave. Difficult. It is revived by the master. In Cyrille Adam’s shamanic school, if some students show signs of leaving, the Mac Gregors take care of reviving them or even intimidating them. The MacGregors? The first circle. Close guard. The elect inducted with a tartan, a piece of cloth. Most are women and Cyrille Adam makes them believe that he is descended from a king of Scotland and that they are his heirs. He arouses jealousies and establishes strata, including among the Mac Gregors. “The women who shared his bed fought to be the first,” says a former member of the movement. Today, these close friends are in the front line to defend the probity of the master and demand his release. They contest any sectarian phenomenon. Speak of jealousy of those who have filed a complaint. “Today, we are afraid of the reaction of the students, the influence is extremely powerful for them, it is God who is put in prison!”, Explain the witnesses to justify the essential anonymity. Because they also believe that dozens of other complaints can happen against Loup Blanc.First name changed.

FREE LUNCH SURVEY. The grip of the white wolf, shaman accused of rape: the disturbing story of his repentant followers