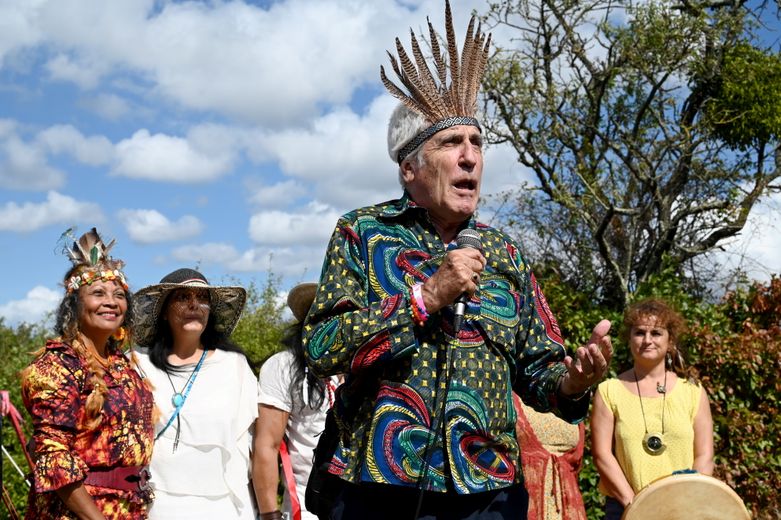 Without any a priori but with questions. This is how we went for a walk to the festival of neoshamanism which is being held on Friday 16, Saturday 17 and Sunday 18 September on the site of the Montagne des Aigles in Cazilhac, a stone’s throw from Carcassonne. Between two workshops with speakers from all over the world, we met Luc, the organizer of the event, claiming to be a neo-shaman.

Already, what is shamanism and what is the difference with neoshamanism?

Shamans are magnetizing healers. Some use medicinal plants. It has been found in all civilizations, in all countries of the world since the dawn of time. It just goes by a different name depending on the locality. Ancestral shamans claim to work with the visible and invisible world. That they are able to interpret signs and communicate with spirits. Neoshamanism, this generally means that shamanism is practiced by Westerners, unrelated to ancestral traditional shamanic societies. That’s my case.

How did you become a shaman?

I switched to shamanism about fifteen years ago. I was around forty. At the time, I was trained in Ayurvedic massage. I met a man who also did massages and treatments. We rented a room together for a few months. One day he was invited to a shamanism festival and there was one place left. He gave it to me. It was my first encounter with this universe. Shortly before, I discovered that I had certain connections. That I could remove certain pains on my own, on myself. When I passed my hand over me, the evil disappeared… I realized that I had gifts of magnetism. I went from massages to treatments. After discovering these gifts, I met two shamans who taught me several things, including the management of emotions. And then, I took a course with a Chilean friend in the Amazon rainforest, immersed in a tribe. There, I was told that I had powerful gifts. I took ayahuaca, a hallucinogenic plant. I also did kombo, an ancient cleansing practice using frog venom. All this, to reconnect me to my true self, to nature…

Please note, we are not doctors. No one can cure everything.

Today, in addition to organizing this festival since 2013, I provide care for free. Because, to be a shaman is above all to be a healer. My two sons, for example, don’t take aspirin. If they have pain, I put my hand on them and take the pain away from them. But be careful, we are not doctors. No shaman will ever say: “come to my house, I will heal you”. It is unthinkable. And then, no one can cure everything. Even doctors cannot.

Have you ever entered a trance state?

Yes, I have already experienced this altered state of consciousness. I was at a festival and there was a thunderstorm. I am someone very connected to storms. With each flash, I saw a kind of knight appear with a large shield and a sword. I went into a trance. I was literally connected to this knight. It lasted for hours. I was in a daze where I completely let go. I discovered an aspect of me that was buried. It freed me from some blockages. To feel good with myself, to have faith in life, to develop my empathy, my intuition, my benevolence… At the energy level, I feel people’s frequencies much more… It’s a rather complicated experience to explain. Some shamans manage to trigger the trance state and return. Personally, it’s not something I know how to do.

I was in a daze where I completely let go

Are you aware that this universe intrigues, confuses and can also frighten?

It’s normal. Human beings are afraid of what they do not know. But I have the impression that society is moving in the right direction even if some false beliefs persist: shamans are perched people, take drugs, do voodoo… And so on. Today, we talk about it in the media. There are books, films on the subject. The Arte channel recently produced a great series on shamanism around the world. French director Jan Kounen made a documentary on the subject. In 2013, when the festival was launched, it was much worse. I lost half of my friends who thought I was a guru in a cult. Ten years later, these same people attend these kinds of festivals.

As in any field, you can come across charlatans. But what is proposed in this festival does not represent any danger for anyone. We have been working with these shamans for over ten years. It is a festival for the general public, also open to children. Ithere is no drug, no sacred plant quite simply because it’s illegal. We are here to release emotions, to play the drum, to take sound journeys, meet his totem animal... We try toopen the doors of our mind.

Aude – We chatted with a shaman: “Human beings are afraid of what they don’t know”