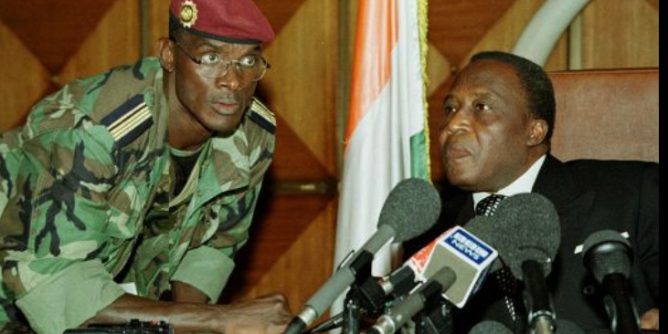 Generally, the perpetrators of coups d’etat affirm, hand on heart, that they seized power to redress the country which, had it not been for their act devoid of any pursuit of personal interest, would have sunk body and soul through the fault of its corrupt leaders, dictators, assassins of freedoms, etc.

No, never will a coup leader admit having seized power just to have it, because he couldn’t have had it otherwise, and above all to have a lot of money, a lot of beautiful cars and houses, lots of beautiful women and lots of cell phones.

In the good old days, coup plotters didn’t have to argue with anyone about the length of their time in power.

We took power, and we stayed there until another coup d’etat ousted you, and that was it. This is what happened in the former Dahomey, now Benin, where a certain Kouandété had the specialty of carrying out coups and selling them to the highest bidders, as well as in neighboring Nigeria, or in Ghana.

In Benin, it is Mathieu Kérékou who will stop the cycle of coups d’etat by remaining in power from 1972 to 1990.

He will eclipse following the national conference which had stripped him of his powers, before returning very democratically to the presidency for two new terms.

In Liberia, Samuel Doe took power after killing the one who held it and he kept it for ten years, until he himself was slain by a certain Prince Johnson who also wanted power.

In Guinea-Conakry, Moussa Dadis Camara wisely waited for President Lansana Conté to switch to the left before making his coup.

It’s more prudent, a coup against a dead man. In Togo, Gnassingbé Eyadema kept power for about forty years before dying a beautiful death, even offering himself the luxury of handing it over to his son Faure, who was immediately elected democratically, after being dubbed by the ‘army.

In Congo Kinshasa, Mobutu remained almost as long as Eyadema in power, but faced with his stubbornness in wanting to keep him at all costs despite the contrary winds and especially despite the injunctions of the United States, he had to flee his country and die in exile in Morocco.

From time to time it appeared on the scene of the coups d’etat of the cranks who after their coup, organized elections rather quickly and slipped away.

This was the case of Jerry Rawlings in Ghana, who, after his first coup in June 1979, organized free elections in September of the same year, won by a certain Hilla Limann. But two years later, seeing that nothing had changed, Rawlings regained power and did not let go until twenty years later, after converting to democracy.

In Mali, Amadou Toumani Touré, known as ATT, overthrew President Moussa Traoré in March 1991, who himself came to power after overthrowing his predecessor Modibo Kéïta.

A year later, ATT organized elections in which he himself did not participate, and ceded power to Alpha Oumar Konaré. It was after Konaré’s two terms in office that he stood before the voters and was elected president.

A few months before the end of his second term, when he had shown no intention of returning for a third, he was overthrown by soldiers in a hurry to have many women and cell phones.

In Côte d’Ivoire, Robert Guéï, who had overthrown President Henri Konan Bédié had made a short transition of ten months, but, having taken himself for the reincarnation of Félix Houphouët-Boigny, the first president of the country, he ran for president and was heartily beaten.

In Burkina Faso, a transition with a civilian as President of the Republic and a military as Prime Minister was organized after the fall of Blaise Compaoré for a short period of about a year.

But the transition Prime Minister had to go into exile in Canada at the end of this transition because he would have been a little too greedy and too ambitious when he was in power.

What about our putschists today? The last four are those of Mali, Guinea, Burkina Faso and Chad. Of course, they too swear that they came to power because of the turpitude of the powers they overthrew, apart from that of Chad, who just took over from his father who died in combat.

Of course, they have no desire to confiscate this power they despise.

But they just want time to, they say, put things in order, and why not, maybe afford a few villas and garnish a few bank accounts well hidden in paradise.

What are they asking? Oh, three times nothing. Just something resembling a presidential term. Time to clean the house. The big question is to know in the name of what legitimacy they believe to be the only ones in duty to put order in the country.

Who sent them? Because they have arms and because power is soft, as we say here in the country. Unfortunately we are no longer in the good old days when nobody asked questions to the authors of coups d’etat. Everyone now wants democratically elected powers. Bloody democracy!

What is a coup d’etat for? (by Venance Konan)