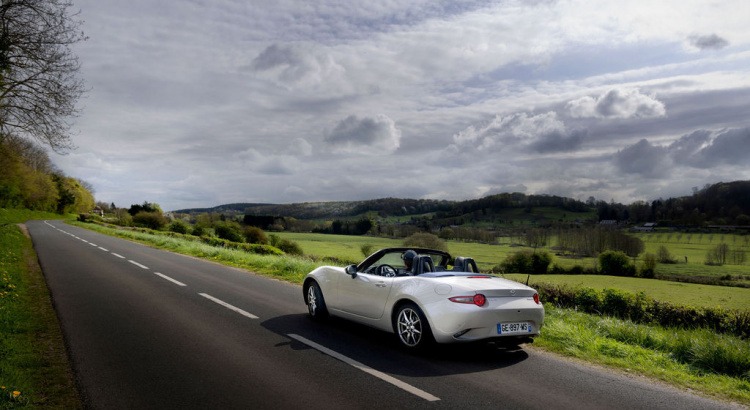 8am at the Longchamp racecourse, in the 16th arrondissement of Paris. We get to know our Mazda MX-5. Dressed in this gray color and a dark blue hood, our frame has allure. The Hiroshima brand holds with this model which responds to the name of Roadster on the archipelago and Miata in the United States, a true automotive legend born in 1989. At the Chicago show that year, the little Japanese makes a splash ! We see in him the reincarnation of the charm of British mini roadsters. The ideal car for a spring trip.

On the way to Normandy

We join the A13, well known to Ile-de-France residents who love weekends in Normandy. The soft top remains closed for the moment, the infotainment system playing music from our smartphone connected via CarPlay. We leave the boiling little crown behind us, then leave the motorway at Mantes la-Jolie, in the direction of Évreux to join the county 830. We finally clear the canvas roof, which has so far isolated us from nature. We enter the forest of Goms just after the pretty city, the other name of the capital of Eure. The history of this wood extending over more than 20,000 hectares, is enough to scare the little ones on a summer evening around a campfire.

A little over a century ago, the wolf came out to terrorize the local populations. Such The Gevaudan’s beast, the creature claimed several victims in the vicinity at the beginning of the 17th century. Now that the animal is part of the region’s past, we enjoy the best of our little roadster serenely. No need to drive at high speed to appreciate the pleasure of evolving hair in the wind. The birds continue to sing their recital in the trees, while the 184 hp 4-cylinder beats the measure.

Meadows invaded by herds of cattle and equines, which again taste the fresh grass, follow one another. We enter Calvados at the level from Orbecwhere those in less of a hurry will appreciate the gentleness of its historic heart revealing pretty thoroughfares with half-timbered houses.

A lover of cannons

We’ve been driving for more than three hours now, giving us the opportunity to put our cavalry to rest under the hood. We stop at the stud farm of Saint-Martin du Chêne, south of Lisieux, where we are welcomed Johann Langlais, administrator and master of the place. The schedule of this great horse lover is always busy.

The next task in his day, a mating right after our interview. It reminds us that here we are in a stud farm, to be differentiated from others dedicated to training or leisure. He explains to us the stages of the life of a horse from the breed of trotters, the specialty of the site. After growth and breaking in the first 24 months, comes the training and qualification phase. From the spring of its second year of life, it enters into competition, for a career which can last up to 10 years. Then follows a fairly active sporting retirement for the best stallions and broodmares, returning to breeding for breeding.

The others find an occupation oriented towards leisure. He adds that the site also serves as a rear base for horses in convalescence, in a serene environment to receive their care before returning to the race. Johann tells us the story of the star, “the boss of the oak”, from “the countess of the oak” coming from a long line filled with successes making the reputation of the house label, and the stallion of the moment “Ready Cash”. Like all trotters, he is hardened to be more resistant than a thoroughbred. This child of this saga starting with the broodmare cobanna one of the eldest of the countess, is promised, he says, a fine career. Gambling friends, you know who to bet on in the next quinté! 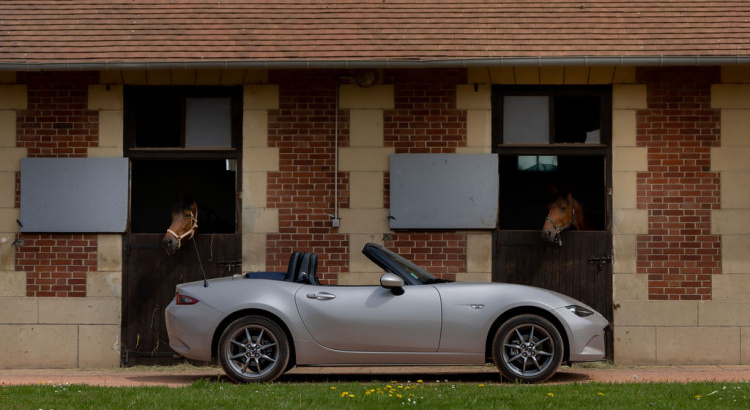 Our break in this high place of French horse breeding is coming to an end. This time we are heading east again, to discover one of the wonders of this corner of the Pays d’Auge, just 10 minutes from the stud farm of Saint-Martin du Chêne. Stands before us, the castle The Kinnor at Fervaques. This beautiful set of 14th – 16th centuries is the major work of the Norman architect François Gabriel. At the beginning of the 19th century, it housed the loves of the writer Francois-Rene de Chateaubriand and Delphine de Custine.

From the free-access exteriors, one discovers an impressive jewel, which contains a bedroom of Henri IV, a dining room which has become the Chapel of the Community, or even a superb Gothic staircase. Since 1995, it bears the label of Historic Monument. In the estate, two remarkable trees are the pride of the park. An old Oriental plane tree from France and also a bicentenary purple beech called “de Chateaubriand”. Today, you can stay in this piece of history, which includes 150 rooms and apartments.

This chatelaine parenthesis closed, we are heading for the departmental 48 from the Touques valley, towards the sea and our final destination. It is not uncommon to see bats flying over the roads, these nesting by the dozen in the surrounding cavities. Our MX-5 likes this Authentic Normandy. The beginning of the evening is looming, so we ventilate hot air in the cabin, to prolong this moment of pleasure despite the frost at the end of the day. Our little roadster features one of the best gearbox controls in automotive production. Mazda dominates its subject in this area and enhances its driver with each gearshift, all gears engaging firmly. A pure delight!

The sun is getting closer and closer to the horizon, we are now only 18 km from Deauville, the seaside resort known for its film festival, its casino and of course its racecourse. Trotting teams train on the beach where you can tread the boards of the promenade of the same name. Right here, the MX-5 coexists with other mechanical beauties. Convertibles at this time of year are not uncommon.

Today’s premium coupés, but also yesterday’s beautiful English cars rub shoulders in the streets which fill up on sunny days. The star of the Côte Fleurie, saw his success born under the impetus of the Duke of Morny, half-brother of Napoleon III. He was the man who made Deauville the luxury resort for the capital’s high society. “What immensity, and what beauty! We are going to build here the kingdom of elegance” he declared in discovering the place in 1858.

After these long hours of driving through the superb Normandy region, we finally park our brave Mazda MX-5. Looking back on him, we remember why the automobile turns out to be the best tool for travel. Facing the sun which is about to disappear to make way for night, we realize that today it has made the link between men with atypical activities, passionate by their trades constituting what makes the beauty of our culture. We have traveled miles on earth, but have also traveled in our history.

MORE INFO ON THE SUBJECT:

The Mazda MX-5 improves further in 2022. The manufacturer optimizes its handling thanks to the integration of KPC for Kinematic Posture Control. This system brakes the inside rear wheel when it detects slippage. Among the novelties, a new ecru color Platinum Quartz and a brown Nappa Terracota or White leather interior. In addition, its soft top version is now available with a black, red or blue soft top. The price list starts from €29,650.

The hotel: the Manors of the Portes de Deauville

The Les Manoirs des Portes de Deauville hotel & spa is located 10 minutes from the seaside resort. This 4-star establishment will seduce lovers of calm in a true haven of peace with 27 rooms and suites, spread over 9 cottages. Heated outdoor swimming pool, jacuzzi and sauna, everything is there for a nice parenthesis in this charming place spread over 2.5 hectares.

9- Mansions of the Portes de Deauville