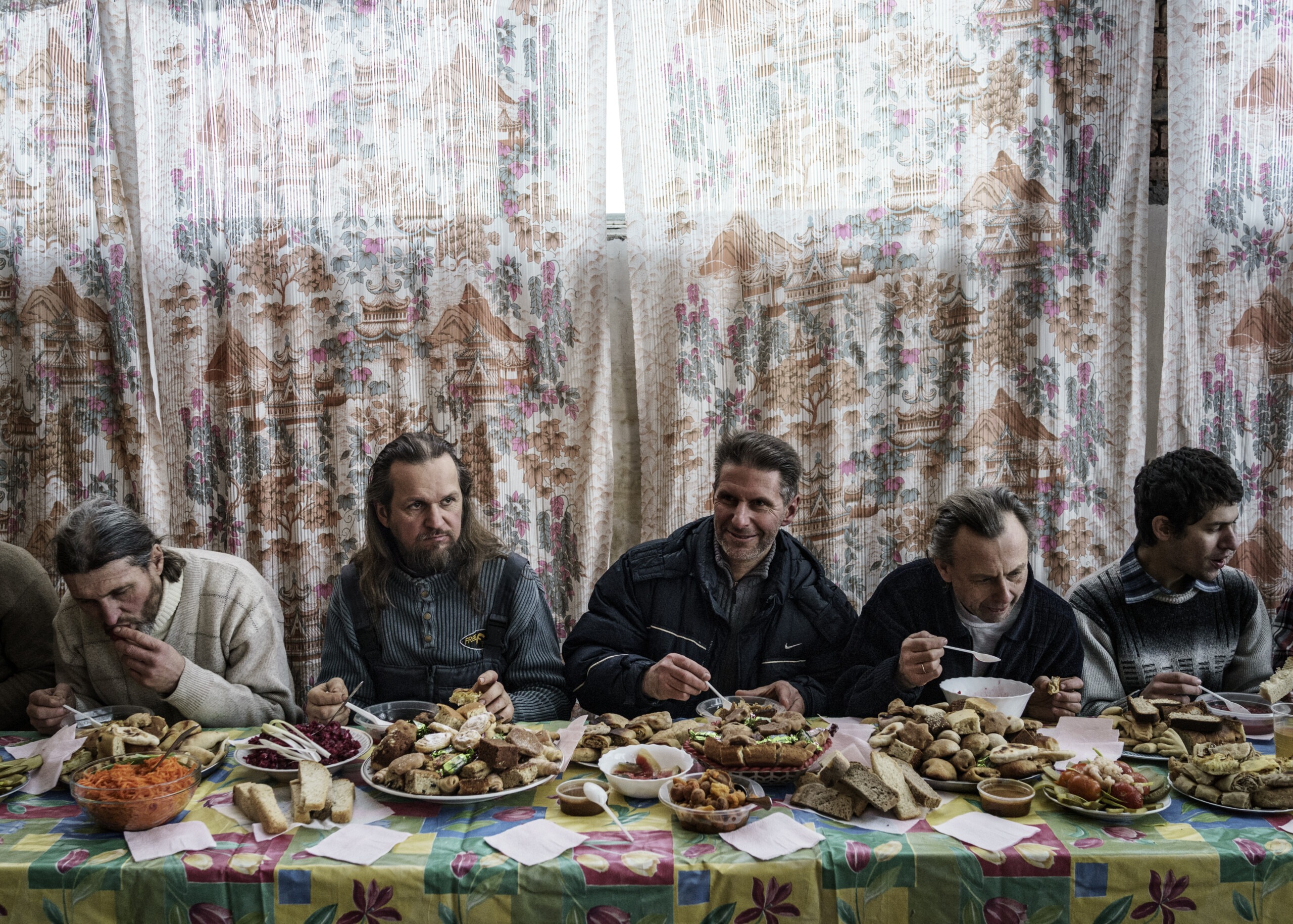 Having set out to meet gurus claiming to be the reincarnation of Christ, photographer Jonas Bendiksen unveils a moving report and questions our belief systems in depth.

Their names are Vissarion, INRI Cristo, Matayoshi, Moses, Kitwe, Dolores and Apollo. They do not know each other, but share the same certainty: that of incarnating the Jesus of the end of time announced in the Bible.“the alpha and the omega, the first and the last, the beginning and the end”.

The photograph Jonas Bendiksen went to meet these seven men to live with their communities and photograph their daily lives. After three years of immersion, he publishes The Last Testament, a collection of their Scriptures. We discover the specificity of each cult. We go from the self-sufficient ecovillage of Vissarionlost in the Siberian taiga, with the colorful character of Moses in South Africa around which we sing and dance happily while waiting for the end of the world. In Japan, we find Matayoshi, a sad old man whose daily speeches nobody listens to. In Brazil, INRI Cristo and his followers publish musical parodies on YouTube. This summer, at the Rencontres d’Arles, we discovered the photos of Jonas Bendiksen. A shock. We navigate with clearly amused skepticism – “How can we seriously believe in a messiah who manages his online communities and rides an electric scooter? » – to a harsher mise en abyme: “Why would it be more aberrant to believe in an illustrious stranger than to take communion in a thousand-year-old church? »

In a few shots, the exhibition questions our belief systems in depth.

There are many prophets, gurus, spiritual leaders who claim to be Jesus. On what criteria did you choose seven of them?

JONAS BENDIKSEN : I actually had to define certain criteria. I wanted to meet people who had had a revelation for a long time, that the latter be constant and coherent. They had to systematize their theology via scriptures or any form of consistent representation, whether they have a true community of believers. I found others, but I couldn’t always access them, and for some I did indeed feel they weren’t always sane. So I ended up with the number 7. It’s a sacred number in the Bible. Maybe it wasn’t so trivial.

You are an atheist yourself. Was it difficult to put your beliefs aside?

JB: I didn’t pretend, I tried to be myself. Once in their community, I considered everything they told me to be the one and only truth. I adopted the same method with each of them. I wasn’t asking a critical question, I wanted to try to describe what the world looks like from their perspective. Journalism, experimentation, a good story to tell…call it what you want! Truth, fiction, religious narration… all of this is mixed inside the project.

Are these spiritual leaders ” sane » do you think?

JB: It is very difficult to answer this question, to affirm that someone is crazy or not. The speeches of these men could be associated with madness. The more you dig into the subject, the more you realize that it is impossible to answer this question: where is the limit between faith and illusion? There is nothing more normal, more socially accepted, than going to a mass at Notre-Dame de Paris…. and yet what could be stranger? This is the kind of thinking that I have mulled over and over again without ever being able to answer.

Did any of these Messiahs mark you in particular?

JB: They all marked me in their own way. Moses, in South Africa, dresses like a hip-hop style gangster and his way of preaching is very spectacular (laughs). He is a passionate man with a huge heart. It is impossible not to sympathize with him. Vissarion, he perfected the aesthetics of his rites, he uses references to Renaissance painters in this magnificent setting that is Siberian nature. I was touched to live with them and it surprised me. Before leaving, I had prejudices of course. I represent the skeptic, the guy alienated by his own logic, his own rationality. When I arrived in Brazil at INRI Cristo, there were 4 meter high walls with electrified barbed wire and only women inside the building… Of course, it is legitimate to ask questions. Once inside, I did not feel manipulation, danger but the passion of open people. It was a profound experience. Their reality is far more magical than mine. When I walk outside and see the forces of nature at work, the causes, the consequences, they see the science of God, a connection to cosmic meaning. Me, the meaning of my life, I have to create it myself! 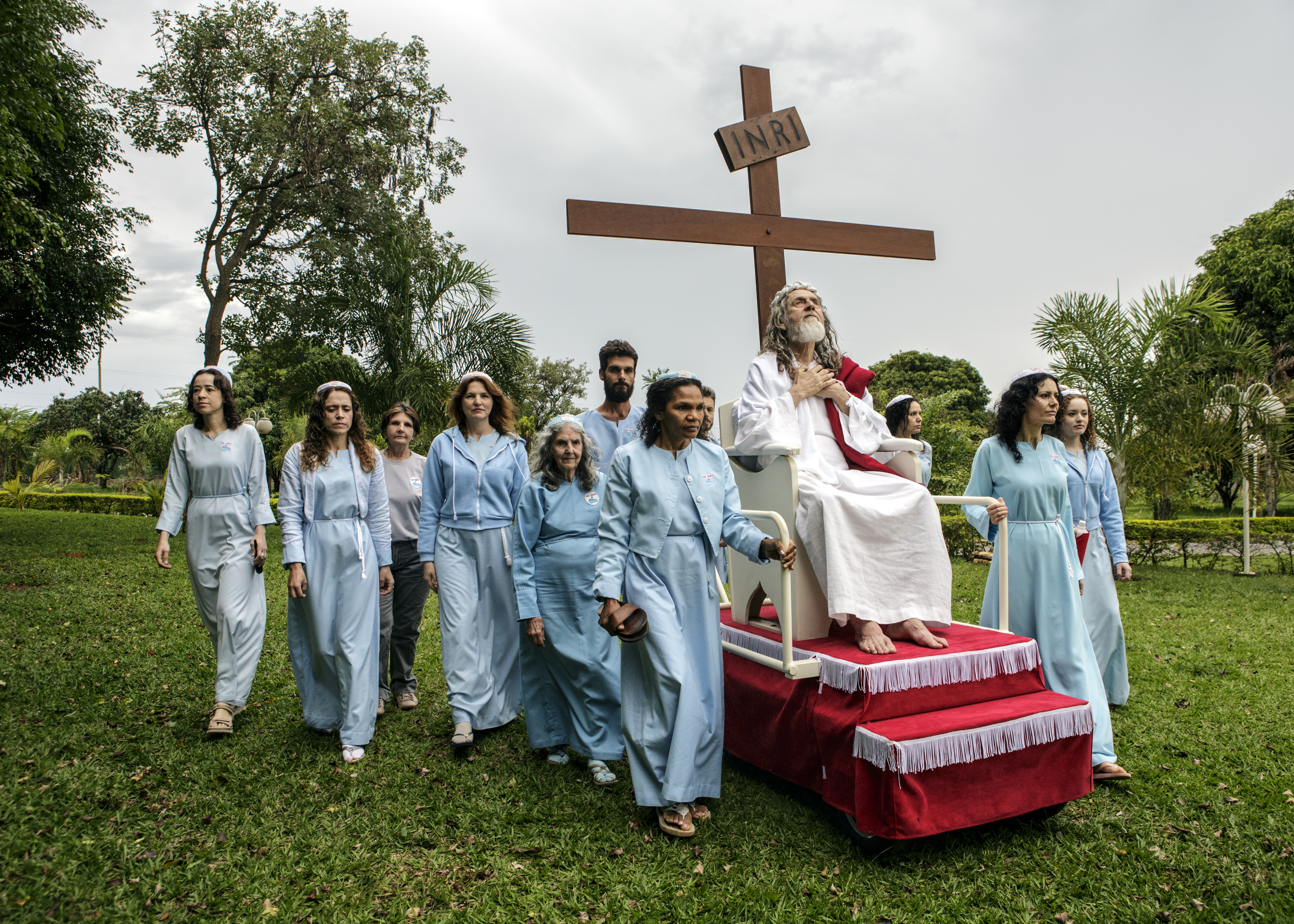 What was their reaction when you explained to them that others thought they were the new Jesus?

JB: It was always a bit nerve-wracking, but that’s the first thing I explained. Some of them already knew. Surprisingly, the reactions were often positive. I have often heard, “It’s a good thing that there are others, it means that Bible prophecy is true!” In the Bible, it is indeed written that there will be false prophets before the arrival of the true Messiah.

What are the main public reactions to your photos?

JB: I have never done a project that arouses so many different reactions. Some laugh, some are moved… It’s part of the very nature of the project, I imagine. The faith, the truth that is cherished by some may seem totally aberrant and senseless to others. And… that’s always been the hallmark of religion. Regarding the humor that can emerge from my photos, it was tricky. It was never my intention to present these Messiahs sarcastically or to make fun of them. I myself laughed at times, but I always tried to ensure that this touch of humor did not come from me. In Brazil, INRI Cristo devotees dance and sing in YouTube videos, and yes, it’s almost impossible not to smile when you see them. They feel the duty to use this means of communication to spread their message and they generate millions of views! “Why shouldn’t humor be in God’s toolbox? they told me. I found it funny and amazing. 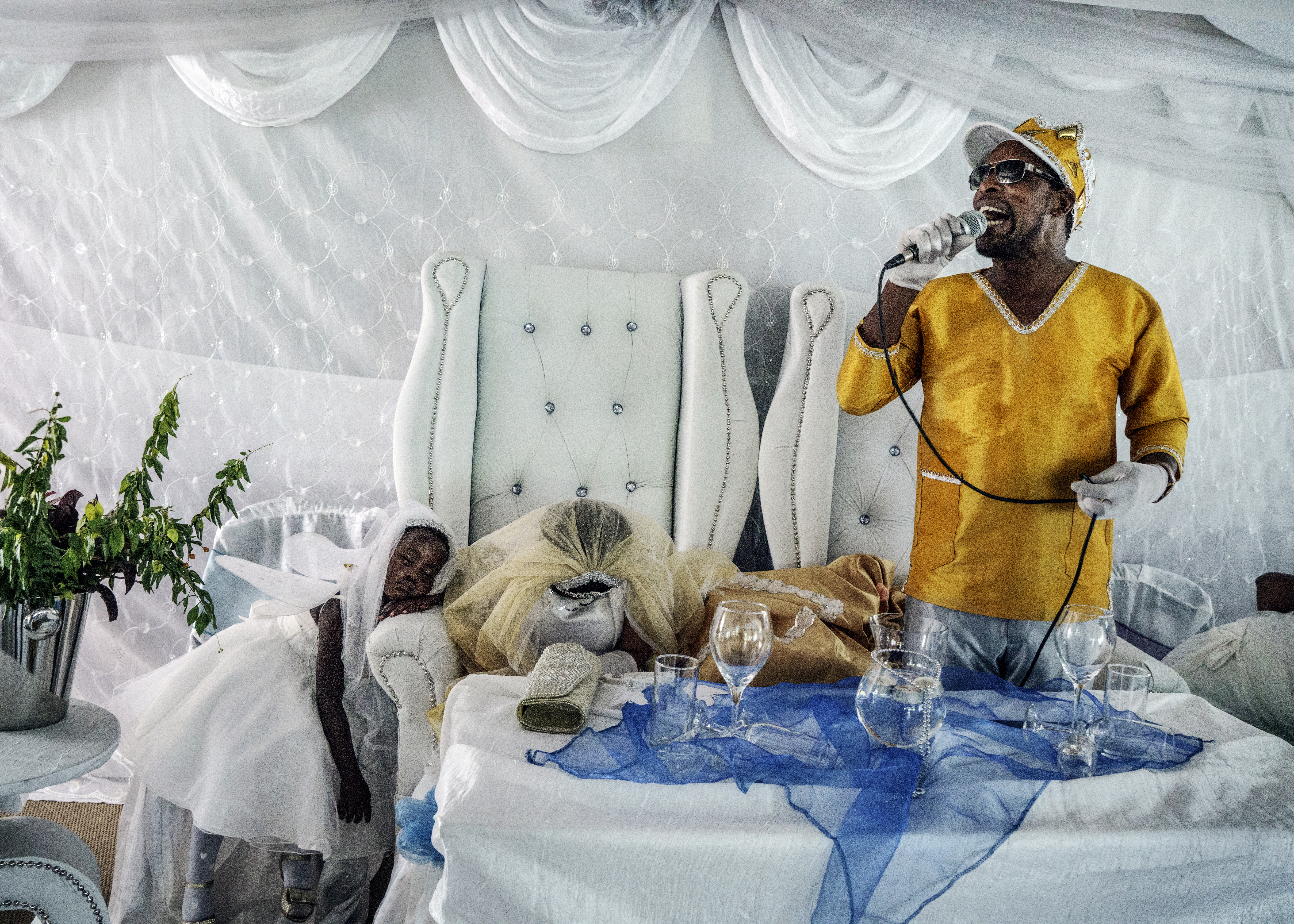 Have you had feedback from communities of believers?

JB: Yes, and these are perhaps the most interesting feedbacks I have had on my work. During my first exhibition in Oslo, I asked the spokesperson of a local religious mission organization to come and speak. He came, sat in the front row with his Bible and told me he had some ambivalence about the project. On the one hand, he knew that it could be interpreted as a criticism of religion. On the other hand, he could also perceive it as a celebration of faith. He wasn’t sure if it was one or the other! (Laughs.) For me, that’s what makes it a success. At the end of the discussion, he said to me: “You know, I have waited all my life for the return of Jesus, and I have never imagined what it might be like! » Many people also contact me to tell me that there is only one true Messiah, that I have it all wrong, that it is good that I am interested in the question because I seem to “know nothing about it”. » … On the other hand, I also get a lot of positive feedback from people of faith, especially because the project takes the subject of theology very seriously. I was also invited to lead a seminar at the Faculty of Theology in Oslo and in many communities of churches to talk about it.

Do you remember who you were before embarking on this project?

JB: Before embarking on the project, I always asked myself the same question: is it true or is it false? I learned that this may not be the most important question. Maybe it’s not that important whether God exists or not. Maybe these men give meaning to these people’s lives and there’s a certain beauty to that. Today, I must admit that everything pales in comparison to what I experienced with this adventure. When you find the rest of humanity, everything seems surprisingly gray! 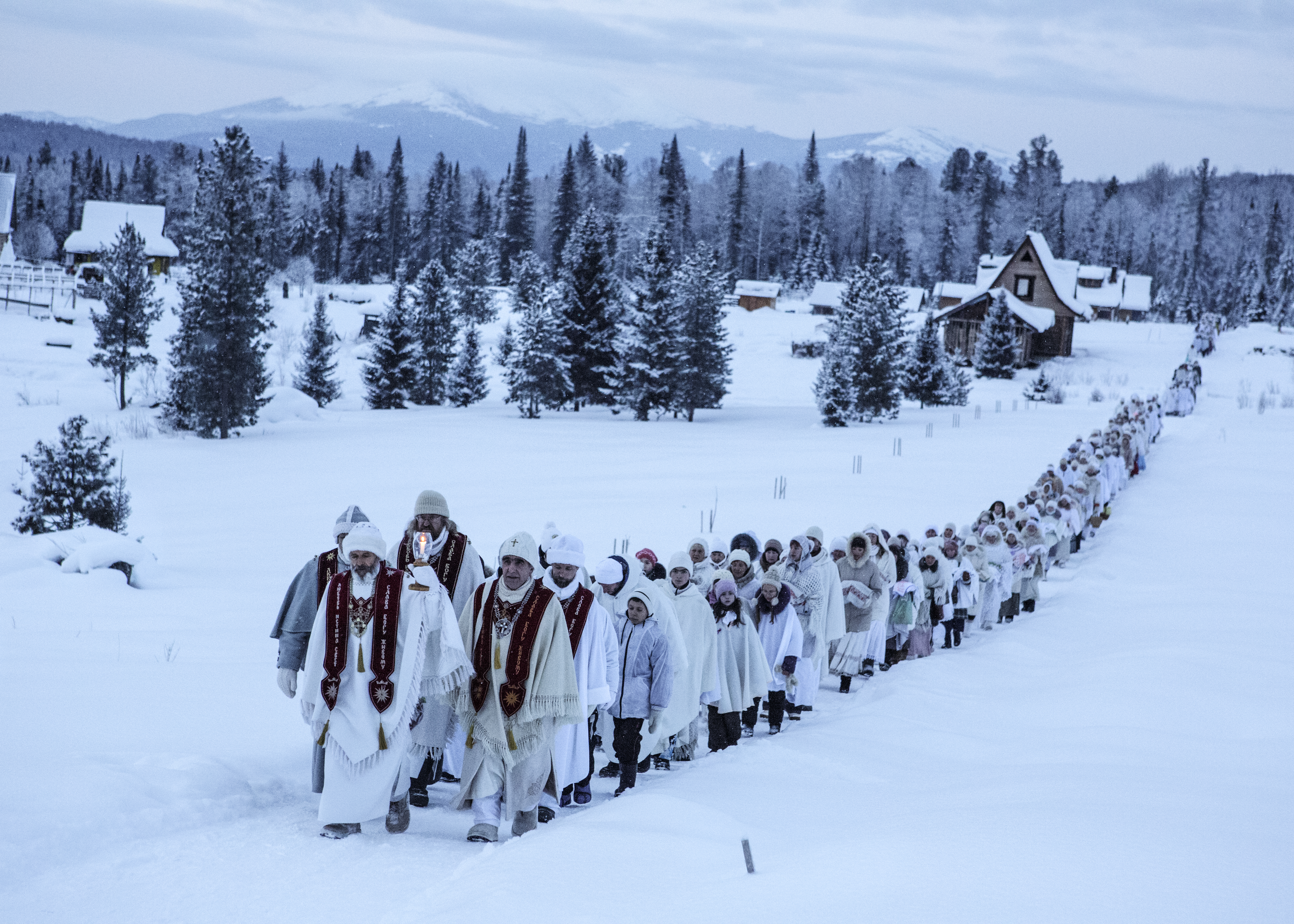 The Last Testament: these men who take themselves for the reincarnation of Jesus