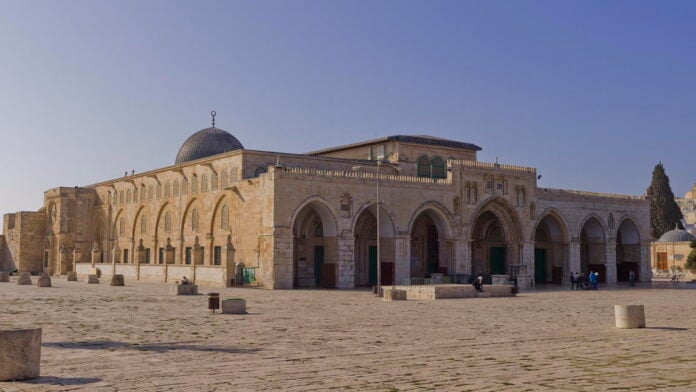 The word “Israel” in the Quran is the name of a highly respected cleric in Islam, known more often among Muslims as “Yaakoub” or “Jacob”. For Muslims, the Children of Israel are an ethnic group characterized by a very special common history and culture.

The children of Israel, in the Quran, are those who were historically concerned with the prophets and the holy books of Judaism and Christianity. However, since 1948, the word “Israel” has also designated a new State accepted and considered by the United Nations and which has a flag adorned with a Star of David and delimited by two bands of sky blue symbolizing the two rivers between which should establish this new country.

The majority of Arab peoples, however, refuse to pronounce the word “Israel” to designate the Jewish state in the Middle East which is in continuous conflict with Arab countries. The majority of Arabs call this country “The Zionist State” and even refuse its existence on a land which they have always called “Palestine” and which shelters the famous mosque which the Koran calls “Al-Aqsa”. The Palestinian cause is then an untouchable principle in the hearts of the majority of Arabs who recall the painful memories of the massacres of the Lebanese and the Palestinians caused by the Israeli dreams of a homeland established between the Nile and the Euphrates.

The old city of Jerusalem conceals a historical monument called “Bab al-Magheriba” which proves that the history of Palestine dear to the Arabs includes even the Muslims of the Maghreb who have always fought for the preservation of the Islamic heritage of Jerusalem. The King of Morocco Mohammed VI even chairs the “Bayt Mal Al-Quds” Agency in order to carry out projects in favor of the “maqdissis” for a decent life for the Palestinians.

International political attempts, even from the most powerful countries, have so far remained insufficient to resolve this famous Israeli-Palestinian conflict and are even struggling to apply several decisions of the United Nations Security Council on this subject. The Israeli State then remains isolated by several countries whose governments abdicate to the will of the Arab peoples who have always opposed the Zionist agenda in the Middle East. The two-state solution to the Israeli-Palestinian conflict based on the 1967 borders remains a fundamental condition of several Arab countries before any political agreement with the State of Israel. China recently announced that it considers the principle of “land for peace” to remain the best solution for this conflict and calls on the international community to make more serious efforts to revive peace talks between the Palestinians and the Israelis. .

Fears of a new internal Apartheid

According to statistics published in 2017, 24% of the Israeli population still self-identifies as Palestinians. However, they are forced to use the new Hebrew as the main language in schools and administrations and they have to deal with the establishment of the new religious laws of the Jewish State.

Many thinkers consider that Israel’s minorities, who previously enjoyed ancient secular regulations, are more likely than ever to suffer from a new internal apartheid that deprives them of their most basic rights as citizens.

Even non-Arabs refused the sad death of the journalist Shireen Abu Akleh. Many consider that Israel is now defying, with such acts, the entire international community which is becoming more and more worried, especially after the triumph of radical Kahanism in the political circles of the Jewish State. Indeed, the reincarnation of the Jewish extremist group Kahane Chai, previously considered terrorist by Washington, risks leading the Middle East towards new conflicts which will surely stop the difficult process of rapprochement initiated by the United States between Israel and several Arab countries.

Is there equality of citizens in Israel?

This attempt at rapprochement, already weakened by the opposition of a significant part of the Arab peoples, constituted a glimmer of hope, especially for the pacifists and the category of “poor Jews” in Israel, to get out of the dangerous Israeli-Palestinian trap in Middle East. No less than 800,000 Israelis are certainly of Moroccan origin and few of them have been able to climb the ladders of the Israeli hierarchy properly. And this, because of their ethnic group of Amazigh origin or sometimes of Andalusian origin. They mainly constitute what is called the category of “poor Jews” and their fault is that their parents rubbed shoulders with Muslims in the past and lived in perfect symbiosis with them in Morocco.

This category of Jews refuses that it is useful only in the Israeli military field and struggles to enjoy, like the other categories, noble positions in the political landscape of Israel. These poor Moroccans have memories of Morocco which considered them true citizens despite their different beliefs. In addition, they have a common history also with the Andalusians sheltered in Morocco after a difficult period in Europe. Even if the King of Morocco Mohammed VI is still committed to the Palestinian question, he recently chose to reorganize Jewish institutions in Morocco by publishing a dahir (decree) relating to the organization of this community and which provides for the creation the National Council of the Moroccan Jewish Community, the Commission of Moroccan Jews Abroad and the Foundation of Moroccan Judaism, which is a religious branch no less interesting than the famous Judaism of Yemen, for example.

The example of Morocco’s victory in Qatar

Moroccans of all religions gave the whole world hope for a peaceful resolution to this Middle East crisis when they came out to celebrate in Tel Aviv and the West Bank the achievement of the Moroccan national team at the World Cup in Qatar. The majority of the Moroccan people would rather see Moroccan Jews peacefully return to their historical “mellahs” in Morocco than to see them trapped without prospects in Israel. Moroccans of all religions must hold their common history in high esteem to protect themselves against blind terrorism that has no religion.

The unresolved Palestinian question obviously risks being a pretext for the great world powers to lead the world towards a new destructive war in the Middle East. Will the solidarity of the Moroccan people who have persisted despite religious differences between Muslims and Jews then set an example to ease tensions between Muslims and Jews in the Middle East? Will the example of Morocco’s multicultural history play a role in solving this problem, which is likely to worsen in this new global context of the Ukrainian crisis?

The Israeli-Palestinian crisis from the Moroccan point of view