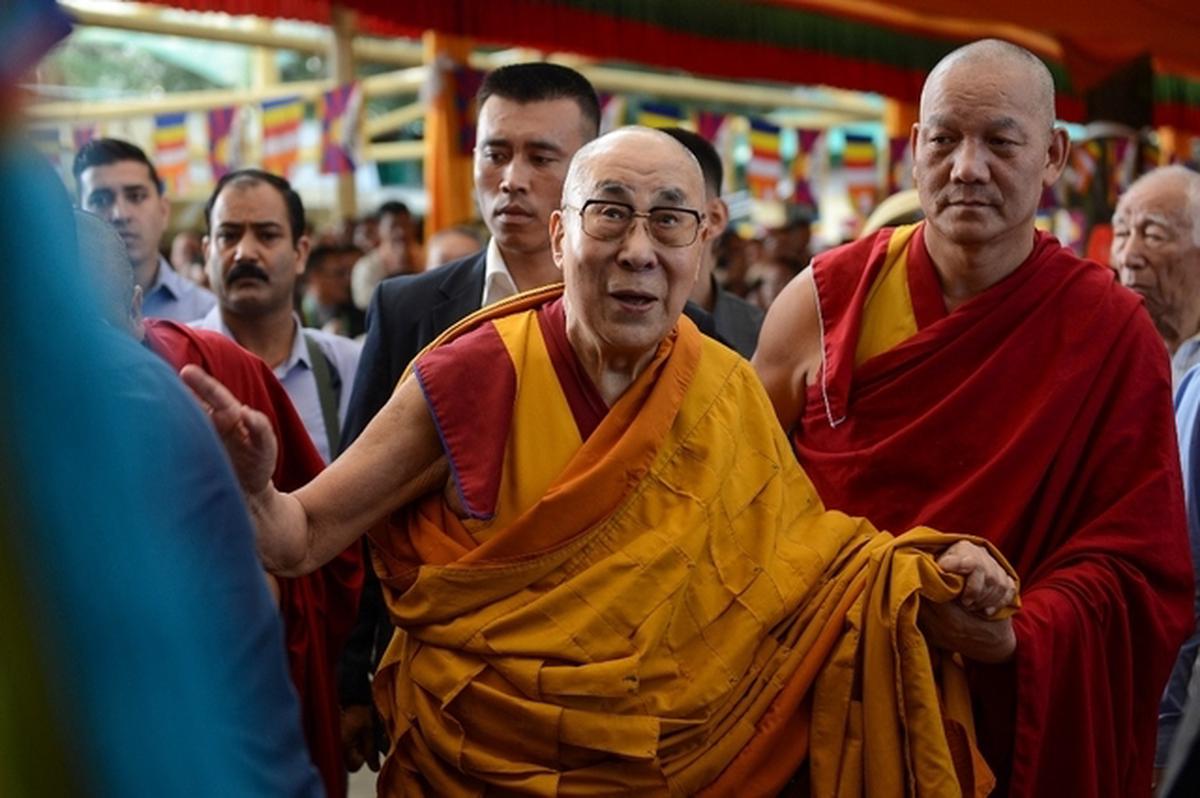 Considered a “traitor” to the homeland by the Beijing authorities, the Dalai Lama exiled in India embodies both resistance to Chinese oppression in Tibet and his religious particularism. A confrontation between Beijing and the Tibetan Buddhist community over the appointment of his future reincarnation could again lead to human drama and geopolitical tensions, as for the Panchen Lama in 1995.

“Who is your spiritual leader, is it the 14th Dalai Lama? – This is Xi Jinping,” replies with a smile a Tibetan monk to a journalist authorized to travel to Lhasa, capital of the Special Autonomous Region (SAR) of Tibet, on the occasion of the 70th anniversary of the annexation of Tibet by China, last June. In each of the monasteries visited by the journalist, no portrait of the current Dalai Lama, Tenzin Gyatso, is visible. This old widespread custom is now banned by the Chinese authorities. In their place stands prominently the peaceful face of Chinese Communist Party (CCP) General Secretary Xi Jinping. These rare testimonies of life and religious practices in Tibet, staged by the authorities, illustrate the stranglehold of power on Tibetan Buddhism and the treatment reserved for its spiritual leader.

The 14th Dalai Lama is the main witness of the religious policy led by communist China in Tibet since its military invasion in 1950. Born in 1935 in the Tibetan region of Amdo, present-day Qinghai province, he is recognized at the age of 2 like the reincarnation of the 13th Dalai Lama by the members of the mission responsible for identifying his successor. These were guided to his village through traditional rites such as divination and the interpretation of supernatural signs. Upon their arrival, the child who spoke the dialect of Amdo would have spoken to the members of the mission in the Lhasa language used by the 13th Dalai Lama. He would then have been able to identify objects that belonged to his predecessor. In accordance with Tibetan Buddhist beliefs, these different signs were proof that the young child was indeed the reincarnation of the Dalai Lama, that is to say of the bodhisattva of compassion Avalokiteshvara, the most important spiritual and political figure in the world. Tibetan Buddhism. The child is then taken to Lhasa to receive a monastic education there.

At the time, Tibet was an independent state de facto which broke its ties with China in 1912, following the advent of the Republic of China. In November 1950, when the invasion of Tibetan territory by the People’s Liberation Army (PLA) had begun for a month, the Dalai Lama was enthroned spiritual and temporal leader of Tibet and its government. After long negotiations, its representatives signed an agreement with China in 1951. This 17-point agreement expressly stipulates that “Tibet reintegrates China” and that its foreign and military affairs return to the hands of the Chinese. He also recognizes the religious particularism of the region and promises that “the Chinese authorities will not alter the status, functions, and powers recognized to the Dalai Lama”. Aware of the importance of Buddhist institutions in Tibetan society, the Chinese authorities want to show that they respect this religion and its spiritual leader in order to hope for support from local elites.

However, this relative protection of Tibetan Buddhist institutions ended with the agrarian reform which in 1958 attacked the land privileges of the monasteries. Many popular revolts are subdued in blood. Monks and reincarnated spiritual masters are persecuted on the charge of having “exploited the people”. Faced with such a situation, the Dalai Lama was forced into exile in India in 1959, where tens of thousands of Tibetans followed him to settle in Dharamsala, the new headquarters of the central Tibetan administration. Conversely, the situation of those who remained in Tibet keep getting worseso much so that the UN has three times denounced the “persistent violation” rights and freedoms of the Tibetan people and their religious particularism. And this, even before the Cultural Revolution (1966-1976), the worst episode of religious persecution in China which aimed to eradicate all forms of religion according to the Slovak sinologist Martin Slobodnik*.

“The youngest political prisoner in the world”

After the atrocities of the Maoist period, the Chinese government resumed dialogue with the Dalai Lama and freed important religious figures who then participated in the revitalization of Tibetan Buddhism. Among them is the 10th Panchen Lama, belonging to the second most important line of reincarnation behind the Dalai Lama. He was released in 1977 and then appointed to ceremonial public functions, which allowed the Chinese authorities to highlight his loyalty and legitimize their regional integration policy. His sudden death in 1989 will lead to the search for one of the first high-ranking reincarnations to take place since the Cultural Revolution, which abruptly interrupted this tradition essential to Tibetan Buddhism.

The attempt to identify his successor a few years later testifies to the control that China continues to exercise over religious institutions and the failure of its policy with the Tibetans. In 1995, several children were pre-selected by a team tasked with finding the new reincarnation of the Panchen Lama. In contact with this team of monks, the Dalai Lama recognized from exile the young Gedhun Choekyi Nyima as a new emanation of the Panchen Lama. Having had no say in this decision, the Chinese government opposed it under a 1793 agreement signed during the Manchu Qing dynasty era. According to this old edict dusted off by the Chinese regime, religious rites require that the appointment be made official during a “draw in the golden urn” at Jokhang Temple in Lhasa. However, the drawing of lots, opportunely organized by the communist authorities, resulted in the designation of another child, Gyancain Norbu. At the same time, the child knighted by the Dalai Lama and the entire Tibetan community is kidnapped by the Chinese authorities. At the age of six, he then became “the youngest political prisoner in the world” according to Amnesty International. Twenty-seven years later, the calls for his release have still not been heard by Beijing, which claims without ever presenting the slightest evidence that it would lead a “normal life”.

“Puppet at the orders of the CCP”

This tragic configuration could be repeated on the occasion of the appointment of the next Dalai Lama. Because the Communist Party intends to have the last word. The State Administration of Religious Affairs took the lead and promulgated in 2007 the first official document determining in detail the procedure to be followed to nominate a reincarnation: each step of the process, from the pre-selection to the final draw, must be supervised by the authorities and it is up to the State Council to decide whether or not to approve the appointment of the future Dalai Lamas and Panchen Lamas. In addition, no interference from a foreign organization or individual should disturb the procedure, according to this text which is half-worded against the Tibetan community in exile and its government.

This is the worst fear of the Chinese regime: the recognition of another Dalai Lama than that of the CCP by the Tibetan community. However, it is traditionally the Panchen Lama who has the responsibility of identifying his reincarnation. This would explain that “the real reason behind the kidnapping of the 11th Panchen Lama by the Chinese government would be to ensure that he himself chooses the next Dalai Lama”, as the said the president of the Tibetan government in exilePenpa Tsering, at a conference in Geneva last November.

To counter this eventuality, the 86-year-old Dalai Lama casts doubt on his own reincarnation. “Only the reincarnating person has the legitimate authority to determine [les modalités de sa] reincarnation”, does he have estimated in 2011before adding that he could end his cycle of rebirth if necessary. “If the Tibetan question is still unresolved, the Dalai Lama has announced that his reincarnation will see the light of day outside of China, possibly in India”, said Dolma Tsering, an exiled Tibetan Buddhist interviewed by Asialyst. She believes that “in a case similar to that of the Panchen Lama where there are two children recognized as Dalai Lama, the Tibetans and the international community will not accept the one who has been chosen by the Chinese government, just as they have with the current Panchen Lama. This would be nothing but a puppet under the orders of the CCP. »

This interference by Beijing in the reincarnation process and the fate that would be reserved for a Dalai Lama not recognized by China is also feared by the international community. In 2020, the head of European diplomacy, Josep Borrell, called for respect for religious practices free from political interference. The United States went even further by passing the Tibetan Policy and Support Act a few months later. This text provides for possible economic and diplomatic sanctions against Chinese officials if they appoint the Dalai Lama themselves. “The question of his succession is not a subject exclusively specific to Tibet, it is part of the broader framework of international politics. And this, for the reason that its faithful live in Tibet but also in the rest of the world”, believes Dolma Tsering. Pessimistic, she recognizes that a confrontation between the Chinese authorities and the exiled Tibetan community seems inevitable for the time being. As well as a likely return of tensions between China and states concerned with freedom of religion after the death of the current Dalai Lama.

Asialyst is designed by a team made up of 100% volunteers and thanks to a network of contributors in Asia or elsewhere, journalists, experts, academics, consultants or former diplomats… Our only goal: to share knowledge of Asia as much as possible. wide audience.

After a master’s degree in social science research specializing in Far Eastern Asia, Gabriel Arnould has been interested for several years in political and societal issues in the Sinophone sphere. For example, he has analyzed the development of the social credit system in China as well as the economic and environmental policy of the Taiwanese large retailers. More recently, he has studied the state of press freedom in Asia-Pacific.

Succession of the Dalai Lama: Beijing’s policy in Tibet at an impasse