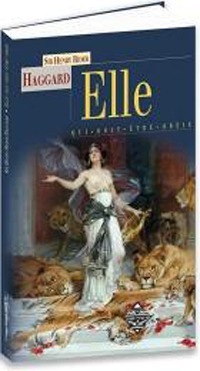 On a haphazard stroll through Cambridge, two scholarly friends cross paths with a duo so mismatched that the striking contrast that characterizes them is just as strong as the desire to get to know each other. Introduced to them by his friend, the editor and introducer of the story will fraternize with the most beautiful Apollo ever met, a certain Lo Vincey. As well as his sidekick, the very unsightly L. Horace Holly. After a brief interview, the two duos will part ways over a comical misunderstanding and misunderstanding between Sir Holly and the dashing and magnificent Sir Vincey who seemed less frightened of women than his wise sidekick. The anecdote could have ended there if a few weeks later two mysterious parcels accompanied by a letter had not been received by one of the two understandings and editor of his state. Inside, a confessed missive explaining the startling story that had happened to the two mismatched friends. An adventure that had taken them to the confines of mysterious Africa, to the disturbing city of Kor nestled in the hollow of a dyed volcano, and its cruel queen, Ayesha. This is the story told by “She who-must-be-obied”. A story that will propel the duo and their acolytes to the borders of fantasy, madness but also eternal love. Because Ayesha and Vincey are not so strangers to each other. What if, as the legend says, these two had already loved each other? Not in this mortal existence where everything matters so little but it was a long time ago, in another life? A love story that would have started more than 2000 years ago, and which would have ended with the most unjust of crimes, that of Kalikrates and the impossibility of repairing what had been broken then. So could it be that…
Colonial literature has the qualities of its faults. But here, it’s more subtle than one might think. Alongside clichés, repetitions and the worst platitudes of white racism, there is a prodigious void of unexpected correspondences. Thus, if in Rober Ervin Howard (1906-1936) otherness is indeed situated in this reinvented dreamlike relationship between white (Solomon Kane) and black (the sorcerer N’Longa), at the very moment when this tiny bond racist and superior vision of the colonist over the colonized, in Haggard this happens on the sentimental level. How not to see this Ayesha or Acha as the almost unconscious idea of ​​a love that breaks down racial barriers as well as cultural distances to build the subterfuge of a relationship finally made possible. Lo Vincey, like the symbolic reincarnation of a past original love. Ayesha, as the symbolic priest of a woman carried away by confusion. This remarkable reversal of the relationship eludes both the original wound and promotes resilience through the possibility of a crossbreeding that remains symbolic because it is symptomatic of the last taboo of this Victorian society: ties outside marriage. And all that goes with it (family, caste, social level, etc.) and are always present in our secularized societies. Haggard’s whole life will be the toy of his polygamous impulses. All his work will remain from his unconscious desire to be monogamous with other ethnic groups. A magnificent game of upset reports, this unforgettable tale finally reminds us how much Haggard’s work is the model that will serve as the basis for all the imagery of a popular culture that will end up incorporating into its dream of film and paper, no longer this slave become free but a man who has become the equal of all other men. From Kipling Edgar Rice Burroughs through all the cinema of the twentieth century, Haggard is a bit the father of all this culture there. Another remarkable edition from the skilled hands of Dominqiue Poisson who used the best translations ever made to give readers a unique quintessence. For this and a thousand other reasons Haggard is rereading.
She who-must-be-obied, Sir Henry Rider Hagard, Terre De Brume editions, translated from English by Ccile Desthuilliers & Jacques Hillemacher, 310 pages 22 Euros.

She Who Must Be Obied by Rider Haggard