For 25 years, this project has been running through Griffo’s head: an ancestral civilization that still inhabits the Canary Islands, a deity who took sides with the Spanish conquistadors and Alexis Berthelot, a young advertiser, embarked in spite of himself in the past. With Rodolphe’s help, he unraveled the few knots that had previously prevented this story from becoming Iruène. After Dickens & Dickens, here is a new collaboration between two pillars of the 9th Art.

Why did you call on Rodolphe?

Griffo: I had the idea to do this story a long time ago. The problem is that I’m not a screenwriter, I have ideas but not the screenplay technique. I accumulated leads for this story and, it is surely the problem of a scriptwriter or a writer who realizes his first work, I tended to want to put too much. My narrative lacked a bit of structure and I was stuck at one point in getting the story I wanted to tell right. I know Rodolphe very well, we are friends and we have already worked together. He made the story less harsh, more romantic.

Rodolphe: Sometimes, we are too close to our subject. It takes distance to do something about it. It’s true that at that time, together, it’s easier to move a project forward.

G.: I live in a very isolated place, far from people in the profession. When I lived in Belgium, in Antwerp, we had an artistic community. When we had a project, there were four or five of us to brainstorm, it was very productive.

The character of Alexis Berthelot, a kind of ferryman between two eras, was it you who had the idea?

G.: Yes. In the end, not a lot of things have changed from my original project, apart from the structure and the end of the story. The original was a bit more negative, more diabolical. Iruene is a God who is neither good nor bad, he is malleable depending on the culture. This phenomenon is found in all Indian tribes. The fact that he is neither good nor bad makes him susceptible to perversion. In this story, Iruène sides with the Spaniards who invade the island.

Is the history of the Guanche people still very present on the island?

G.: Yes absolutely. Not only is the Canarian past very present, but there is even a kind of renaissance: people give Guanche names to their children. It is very often when there is precisely a kind of rebirth that History becomes romanticized.

Rodolphe, when you discovered this story, what interested you?

A.: As said before, my role was to simplify. He had put in guts and guts, memories and emotions gathered over twenty-five years. Everything was full of good things but Gide said that it is not with good feelings that one makes good books. By that I mean that it was very strong but too complicated in my opinion. I wanted to simplify things to make them a bit more universal. You had a look that was very centered on this island but, to interest the readership in the history of this island, I tried to play on certain springs that go beyond the simple history of the island and the volcano . The god/demon duality is found in many mythologies.

G.: Absolutely. All this comes up in all cultures, like the Indians or the Celts at the time. I think all of these stories come together somewhere. 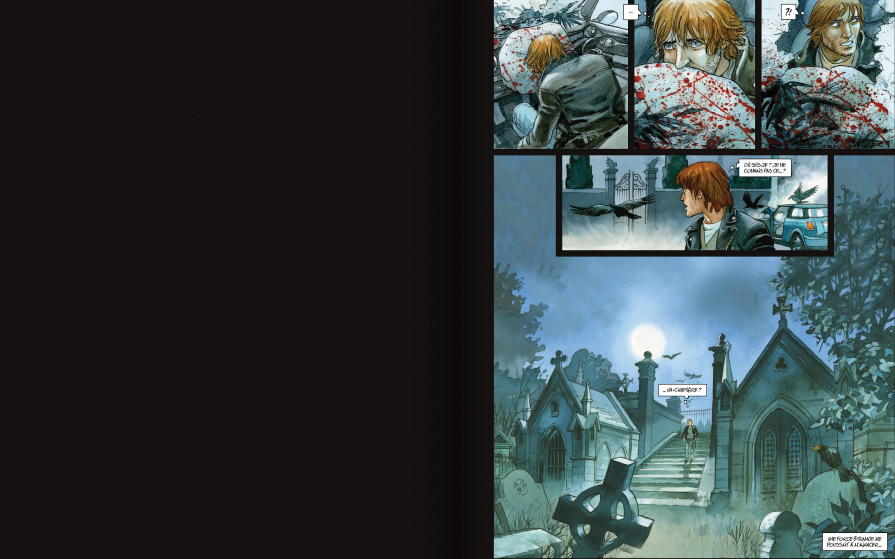 Is a black page in an album a luxury for a screenwriter?

A.: She wasn’t paid by the publisher if that’s the question (laughs).

A: It makes sense. The real story somewhere ends there. He begins his nightmare, he’s in a coma, but we don’t know it until afterwards, and when we wonder when it happened we go back and realize that it’s there. When he mentions the car accident at the end, we realize that everything else is a parenthesis.

G.: That’s what I meant when I said that the original story lacked structure. It was already in the story but it was not obvious. Rodolphe highlighted it.

There is also this double-plank which allows breathing…

R.: He is solicited by this past and caught up in it, he does not choose to return to it.

G.: But we don’t choose reincarnation either.

G.: There is a force which draws him towards the past.

R.: It’s a bit reluctantly but, at some point, he accepts this role that we give him.

G.: Yes, because he wants to get rid of his nightmares, he’s haunted somewhere, he sees them everywhere.

A.: Yes, but at a certain point he accepts having existed before under another name and there are all those people around him who ask him and he accepts to play the role and to try at his level to fight for that its original culture continues. The story of this cave where women would have been locked up and would have died, it is on this small point of History that at least on this there could have been a small interference between our present and this remote past.

How did you build this cover? Did she come quickly?

G.: I had the idea from the start, we refined it. Originally it was built more to the right. I don’t know who had the idea to insist on this fog.

G.: Yes it’s Vincent, he’s brilliant. He proposed it and it’s even more dreamlike. It is the ghost that comes from nothingness.

A: Speculative fiction about a future world that scares us because it’s too perfect. It is something that would be situated between 1984, The best of worlds, Fahrenheit 451the film Braziletc… I develop the vision of a future world, perhaps not so distant as that…

R.: It’s a totalitarian vision of the future with always this old myth of freedom. We arrive at a universe that is largely built in trompe-l’oeil with decoys, where nothing resembles freedom more than an ersatz freedom, than a false freedom…

Rodolphe: “My role was to simplify the story”