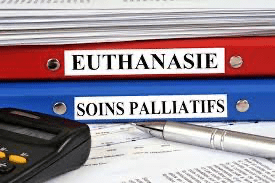 Last night, my wife and I were having dinner with a close friend, an excellent doctor, humane, close and attentive to his patients…

In the midst of a debate on the evolution of the Léonetti law and support towards the end of life, the subject naturally came to the table…

We all go through, with age, the great anguish in the face of our inevitable finitude and the question arises of how we are going to approach this painful passage from life to death when the time comes…

Our friend was the boss of a major palliative care unit in our region, an end-of-life unit known and recognized for its methods. He explained to us at length how, according to him, we had to support the best in the world, the less painfully, patients and those eager to end their lives involuntarily or voluntarily.

He assured us at that time that in more than 3 out of 4 cases it was the entourage, the close family of the patient who decided on the euthanasia of his often unconscious parent and when it was the patient’s choice it was is that he was exhausted, tired, if moreover he underwent exhausting sessions of radiotherapy and/or chemo that had become ineffective and that the great pains he was going through were overwhelming and that the morphine administered certainly helped him to hold on. He was all the same at the end of his rope and wanted to “get it over with as soon as possible…”

At the turn of our exchange, he told us:
“Indeed radio or chemotherapy make you live and last longer but palliative care makes you live much better but for a little less time, it’s a reality.”

It is necessary to be able and to know how to listen to the patient, to let him speak, to explain to him clearly that he can decide, and to respect his will, his wishes.

He told us the story of this patient at the end of life, lying down, exhausted, to whom he asked what his strongest wish was before passing on to the other side.
And his patient to answer him:
“I wish before I die to spend 8 days by the sea with my wife.”
Our doctor replied: “I can help you make your wish come true, I promise to get you on your feet and give you 8 days of peace, but beyond that, I can’t guarantee you anything.”
This was done and on his return from the sea, this patient passed away in peace with his family.

The moment came when we obviously invoked the question of God, Spinoza, Pascal Descartes and the Greek philosophers all went through this, then the positions of religions, pantheists and monotheists, Buddhist beliefs, the great philosophical question around the absurd , according to Camus, reincarnation as a possibility and then decorporation, this phenomenon often invoked by patients returning from this tunnel and who seemed to float on their own body, but also assisted suicide, supervised euthanasia, and finally NDEs, Experiments of Imminente Mort and the return of these travelers from the water beyond for the wine-from here (a bit of humor all the same).
The studies around this phenomenon are important but it remains a vast subject that should not be taken lightly because we are advancing into unknown lands…

A patient at the end of life has the right to choose the moment of his death, not by euthanasia because I am against this practice, I prefer that of accompaniment in a palliative care unit… according to my friend.

LISTEN, RESPECT THE PATIENT’S WISHES AND HELP THEM CHOOSE THE MOMENT AND WAY OF THEIR END OF LIFE…

Surprised, I ask him: but how could one choose the way and what did he mean by the possible choice of the way out other than euthanasia.

In parallel with the treatment by chemo or radiotherapy, the patient must be accompanied very early and relieved of his pain as soon as it appears and this is not the case in our dehumanized hospital system which only sees the disease and often ignores the patient.

Hospital world which often minimizes what the patient says when he complains of trying pain, physical pain but also emotional pain, and it is necessary to treat and soothe these two pains.

Around us, we have all had loved ones who have gone through this painful period, who have left us in pain and pain and others who have advanced on this path in peace and with much more serenity…

All these trials lead us to question our own end of life.
“And for me, if I had to go through this ordeal, what choice would I make, what do I want to live when I die?
What decision to make and when?

The conversation went on very late into the night, and back home, I went to bed and it took me a while to get to sleep, and since then I’ve been wondering like the rest of us.

And you what do you think ?