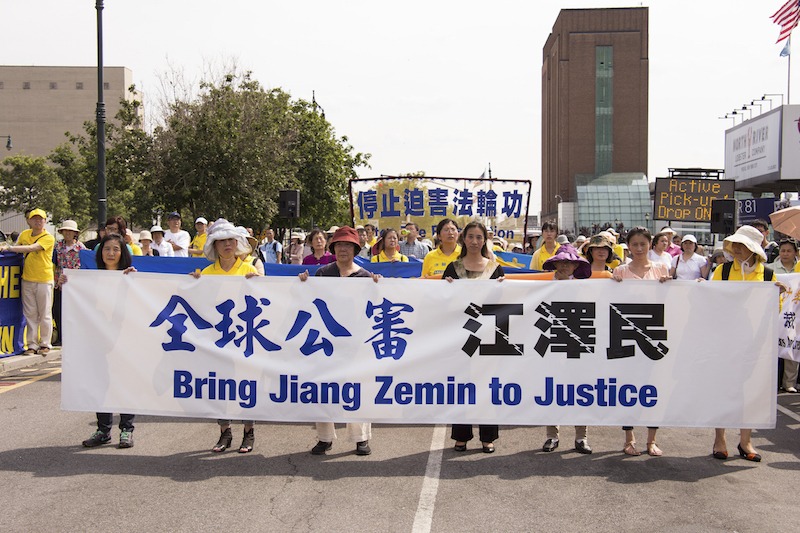 The former Chinese leader Jiang Zemin orchestrated religious repression unequaled in history (against Falun Gong in particular). According to scholars and activists, he deployed tools and methods for this that laid the foundations of China’s current digital dictatorship.

Jiang Zemin died on Nov. 30 at the age of 96 in Shanghai from leukemia and multiple organ failure, according to Chinese state media.

While some analysts draw a positive balance sheet of his alleged contributions to China’s economic development, others point to his dangerous hegemonic ambitions, his questionable methods on the international scene to advance the communist country to the detriment of the United States and the West.

At the same time, human rights defenders and observers draw attention to its massive human rights violations (starting with the Tiananmen massacre).

“His greatest crime remains of course the persecution of Falun Gong, which began in 1999 with ‘pogroms’, and the fact of having governed China by corruption and the eradication of all ethics”Frank Lehberger, a European-based sinologist and analyst of Chinese Communist Party policy, said in an email to Epoch Times.

The spiritual practice of Falun Gong, which combines meditation exercises with moral teachings based on the principles of truthfulness, compassion, and tolerance, gained popularity in the 1990s. Considering the practice a threat to his power, Jiang Zemin launched a nationwide persecution that led to the arrest of millions of practitioners for their beliefs. (Follow the persecution on faluninfo.net)

The generalized policy of oppression deployed by the former leader thus laid the groundwork for other campaigns of repression against Tibetans, Uyghurs, Mongols and Hong Kong.

Jiang Zemin is the first CCP leader to be sued in domestic and international courts.

The Panchen Lama, the second most important religious figure in Tibetan Buddhism after the Dalai Lama, died aged 6 in May 1995, when Jiang Zemin was in power. He would have been kidnapped by the regime. Since then, no news of him or his family. In 2018, the US State Department requested, in a official statementhis immediate release.

“In the Tibetan tradition, the Panchen Lama and the Dalai Lama have the essential role of recognizing the reincarnation of the other. Beijing appointed its own Panchen Lama six months later, in November 1995. This all happened under the reign of…Jiang Zemin who enjoyed absolute authority”writes Tsering Passang to Epoch Times.

The 17the Karmapa himself, spiritual leader of the 900-year-old Karma Kagyu branch of Tibetan Buddhism, had to escape from Tibet in dire circumstances in 2000 under the regime of Jiang Zemin and abandon his Buddhist education in Tibet.

Economically, Jiang Zemin’s policies kicked off the rampant theft of intellectual property, giving rise to cheap Chinese counterfeits that flooded the global market. According to Frank Lehberger, Jiang Zemin is also responsible for the widespread environmental destruction in China and Chinese predatory capitalism.

The problem of democracy

According to French historian and author Claude Arpi, Jiang Zemin always showed a complete inability to understand democracy during his visits abroad. Wherever he was invited, governments had to carefully clear the ground and push back the protesters mobilized to denounce his crimes.

“On March 25, 1999, Jiang Zemin was on an official visit to Switzerland. On that day, when he arrived at the Parliament in Bern, he saw pro-Tibetan demonstrators in front of the building carrying ‘Free Tibet’ banners. He got very angry.”said Claude Arpi, now based in India.

“In parliament, he addressed Swiss parliamentarians and said: ‘Today Switzerland has lost a friend.’ »

A few years after this incident, a Swiss diplomat confided to Claude Arpi that Jiang Zemin’s anger had lasted all evening until the banquet to which the Swiss president was invited.

“Jiang Zemin was still so angry that he refused to eat dinner much to the embarrassment of his hosts, who were trying to explain what ‘democracy’ was. In vain ! »

Tsering Passang participated in protests during Jiang Zemin’s visit to London in 1999. He was eventually detained by British police for over six hours.

“In Cambridge (I did not attend the protest), Chinese intelligence and security services were seen ordering British police to contain Tibetan protesters. »

“There is no doubt that the policing went beyond what was reasonable – it was very strict. »

The police then apologized to him.

Various factions within the regime

Some scholars recall that Jiang Zemin was the leader of one of the most important factions of the CCP, nicknamed the “Shanghai gang”. (Jiang Zemin had been the mayor of Shanghai.)

The regime was divided, struggling with various factions, and these divisions had a huge impact on the political and economic orientations of the government. According to analyst Srijan Shukla of the Observer’s Research Foundation in a 2021 article titled “Rise of Xi Gang”, [Ascension du gang de Xi]as long as Jiang Zemin was in power, the Shanghai gang not only dominated national politics, but the city of Shanghai itself generally enjoyed better economic treatment than Beijing, the capital and center of central power, and any other city.

“A study in 2002 showed how for…12 years (1990-2002), Shanghai received 19.8 billion yuan more in state grants and loans than its main domestic competitor, the city of Tianjin. This preferential treatment has also resulted in greater foreign direct investment (FDI) flows to Shanghai than to any other Chinese city.”wrote Srijan Shukla, adding that between 1978 and 2002, 86% of FDI flows into China went to the east coast.

After leaving power, Jiang Zemin continued to partially control the CCP behind the scenes, as the head of the Shanghai faction.

According to Frank Lehberger Jiang Zemin manipulated and sabotaged the work of his successor Hu Jintao until 2012. Yet Jiang Zemin officially left all his functions in 2004.

When Xi Jinping came to power in 2012, Jiang Zemin thought his faction could “Handling it like a kind of ‘puppet'”explains Frank Lehberger.

According to Tsering Passang, the death of Jiang Zemin is undoubtedly very advantageous for Xi Jinping: “His death may be detrimental to those who supported him in the Party, which means a perfect opportunity for Xi Jinping. »

For Frank Lehberger a rumor had already been circulating since mid-November that Jiang Zemin was dead. According to him, Xi Jinping decided to wait. He finally decided to announce his death at the time of the demonstrations against the zero Covid policy. However, there is no way to confirm this assumption.

The analyst believes that Xi Jinping will now focus on eliminating the last influential figures of the Shanghai faction. “Because it seems that Jiang Zemin had a tacit agreement with Xi Jinping to keep quiet, postponing major attacks, until his death. »

How can you help us keep you informed?

The Epoch Times is a free and independent media, receiving no public support and not belonging to any political party or financial group. Since our inception, we have faced repeated attacks to silence our information. This is why we count on your support to defend our independent journalism and to continue, thanks to you, to make known the truth.

I was a little suspicious of Pokemon Scarlet and Purple, but after the new trailer, I'll tell you wh...
Gujan-Mestras: "Zeus", the "guru", who wanted to "save humanity" through sexual relations
Immigration Project: Even more and always more…
Tweet
Share
Share
Pin