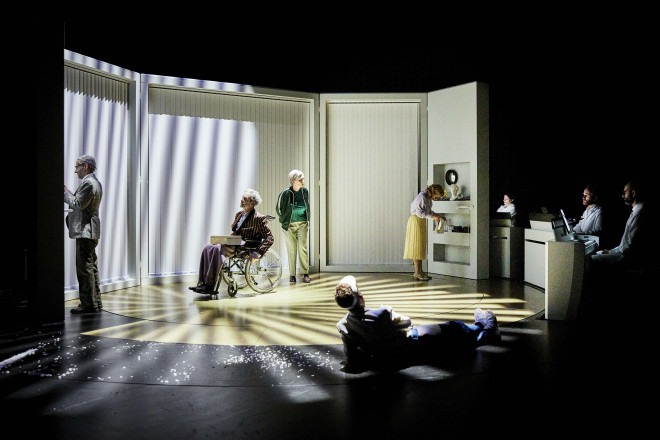 The Atelier lyrique de Tourcoing welcomes The Terrible Children, the “opera-dance” of Philip Glass. This total opera, of an innovative genre, finds in this production of the Co[opéra]tive a new breath at the same time by the staggered staging as inventive as it is breathtaking and by its distribution.

The extensive catalog of Philip Glass includes to date no less than twenty-five stage works since the creation almost half a century ago ofEinstein on the beach. Right in the middle of these, the Cocteau trilogy (Orpheus in 1991, the beauty and the Beast in 1994, and present terrible children created in 1996) occupies a prominent place.

We know the complex plot of the seminal 1929 novel by its multiple possible levels of reading. We will recall Paul’s symbolic wound inflicted by the ghostly dunce Dargelos, unacknowledged love of the young boy, in the heart of a snowball fight, behind closed doors in the room where the latter is now taking refuge as an eternally ill person, just maintained by his sister Elisabeth after the death of a puppet mother. What follows is a kind of theater of the imagination held by these two “terrible children” in the heart of a huge villa, the legacy of an aborted marriage of the sister, and the love affair, to say the least platonic, maintained with the couple of friends Gérard and Agathe, and finally the death of Paul under the effect of another “ball” of…poison, once Elisabeth understood that the reciprocal attraction between Paul and Agathe (a kind of double reincarnated from the mysterious Dargelos) puts this world of intimate fraternity in total turmoil. Glass has surgically tightened the plot through a succession of twenty scenes, organically linked both by the repetitive continuum of the accompaniment entrusted to three pianos (this evening digital), so typical of the American composer, and by the emergence of a new melodic conception by kaleidoscopic snippets in the middle of this sound vortex. 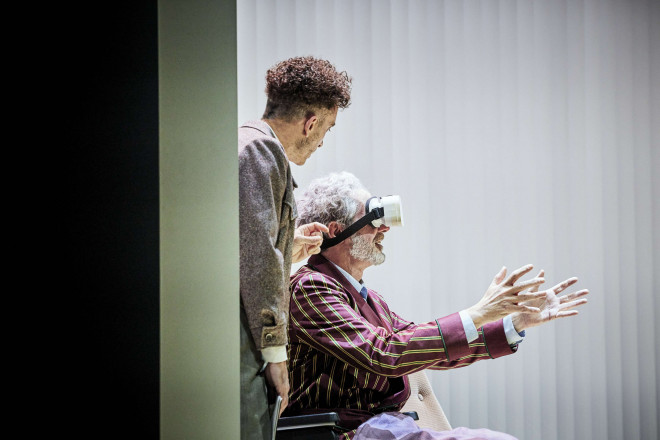 Phia Menard, juggler, performer, choreographer, director, takes over the libretto by Philip Glass and Susan Marshall to shift its semantic and spatio-temporal field. It is thus in communion with the introductory warning of Cocteau, whose work deals with “grown-up people from (my) background”, far from childhood in “a more silly zone, more vague, more discouraging, more dark”. She shifts the action with protagonists here who have become very diminished old people and admits to being inspired by her own experience, linked both to her adolescence and to the senescence of her parents, – by the disconnection from the real world (reinforced this evening by the wearing by the main protagonists of virtual reality helmets), by the nociceptive capacities thus developed during the course of life, and of course by the gripping apprehension of death.

The director admits to being inspired both by the somewhat outmoded preciousness of Cocteau’s language in her novel and above all by the pangs of aging, between passion and depression: a kind of end-of-life support, in institutions, these bodies worn out by life and work, with the procession of heavy pathologies (neural degeneration, difficulty in moving, loss of autonomy and certain senility): a deleterious context which does not prevent these beings from remaining desirous, amazed, fearful, comedians, flirtatious lovers, jealous but also at times terrified or terrorizing. Emotions linked to the past are here dodged and relived through dolls and puppets, referring to a defunct reality.

Phia Menard therefore dare the – successful – bet of moving the action to the Ehpad or the retirement home of which Paul and Elisabeth are two residents among others (Agathe, Gérard) under the supervision of a narrator-nurse , and three pianists supposedly presenters employed by the geriatric institution and therefore finely integrated into the action. We have fun with a few additions: the occupational therapy session devoted to cutting and origami – to represent a crayfish, a deliberate nod to the initial novel where the siblings tasted these crustaceans in bed! – turns out to be a welcome moment of hilarious relaxation.

The scenography, under the almost clinical lights ofEric Soyer, also succeeds in squaring the circle between musical action without pause and discontinuous singing, refusing any dance or choreographed gesture to the singing protagonists – unlike the initial project of Glass and Marshall. Based on the fluid use of a triple concentric turntable – where the keyboardists take their place on the outermost crown – a sort of visual metaphor for the sonic labyrinth, the infinite spiral of the score, it can also come to a standstill and deploy the splendor of the removable decor of the Lilliputian bedroom over the entire width of the stage, for a brief but crucial quasi-medieval song of gesture where the shadow theater of the protagonists takes over deliriously from any present or augmented reality of the evocation backward-looking. Until the final apocalypse, the actors thus seem in a stable, almost aerial equilibrium since it is their environment that is constantly in motion. 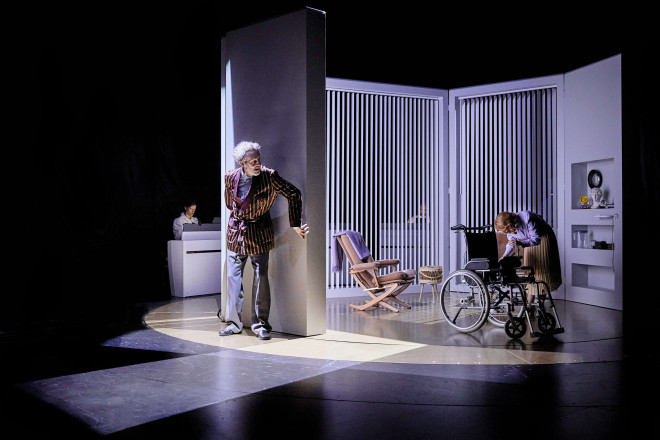 The creation of the work in Zug had been entrusted to the conductor Karen Kamensek. We know it, Emmanuel Olivier had already ensured from his keyboard the musical supervision of a previous production in Bordeaux here in 2011 and refuses the idea of ​​a too uniformly directive gesture. This leads both to a greater fluidity of the musical discourse held by the three pianists – in addition to the “master of ceremonies”, already mentioned, the remarkable Nicolas Royer and Flore Merlin, weightless throughout this mobile perpetuum both spatial and musical- and to a more chamber decantation that empowers the four singing soloists much more. De facto because of the options defended by Phia Ménard, the chosen vocal quartet – slightly soundtracked – is deliberately older, and, given their make-ups, more terrifying grandpas and grandmas by their obsessive mania than terrible children by their rebellious spirit!

Olivier Naveau thus embodies a Paul who is always spiritually dashing, condemned to the immobility of a wheelchair or perilous journeys with this je-ne-sais-quoi of tiredness in his voice, making his character all the more believable, both human and pathetic, with this ounce of interior crack cracking the varnish of the organ. Melanie Boisvert portrays a manipulative and poisonous Elisabeth. All the ambiguity of the character passes through a theater of the voice, between acid colors and – during the medieval pantomime – more friendly vocality. She triumphs over all the incessant vocal swaying imposed by the score, but sometimes to the detriment of the clarity of the enunciation. Let’s admit that we have looked more than once at the surtitling bench to fully grasp all the words.

This is Ingrid Parakeet which provides both the mute role of the deadly Dargelos and the brief interventions of the very intriguing Agathe: it is a kind of vocal double of the Elisabeth of Melanie Boisvert by its spicy freshness with a welcome greenness. But his diction turns out – it is true in a musically much easier part – absolutely impeccable.
Francois Piolinowith his beautiful tenor voice, embodies a credible Gérard, but unfortunately a scratchy or pinched nothing in his high register, sometimes in audible difficulty during the last terribly tense scenes in the range.

If Glass had imagined the story told precisely from Gérard’s point of view, Phia Ménard opted for a reciter-narrator duplicated in the character, “multifunctional” within the retirement home. It is to the very astonishing Jonathan Drillet that falls this role, both symbolic and mediate. He is a kind of very calibrated reincarnation of the young Cocteau both in his tone, in his deliberate dandy attitude and in a certain physical resemblance (if only the haircut of the day). With an almost casual appropriateness and a superlative implication, he seizes the text and in particular his long monologue-interlude, added at the middle of the show, interrogative taking up an important part of the short film ” Jean Cocteau addresses the year 2000 of June 12, 1962.

We wish success as strong as deserved to this intelligent production of the Co[opéra]tive for the big dozen traveling performances to come. This virtuoso and challenging show, a totalizing and very personal creation, reinvents its own scenic space and its internal dynamics transversally, with regard to the various “cocteauesque” variations of the princeps novel, and deserves more than a simple glance or ear. by its success, between sublimated purity and immanent theatricality.