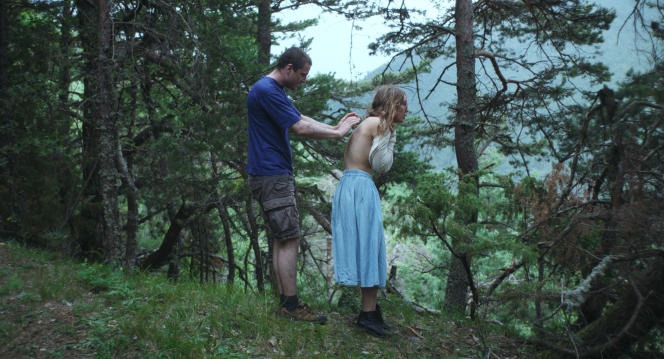 THE OPINION OF THE “WORLD” – NOT TO BE MISSED

It’s a story of a grandmother and a wolf, without red riding hood, the idea of Jacky Pebble, by Lucas Delangle, not being so scary. This first feature film mixes naturalism and fantasy in a weightless story, where love tries to divert the course of cruel tales. In a village perched at the very top of the Alps, Jacky (Thomas Parigi, musician by profession) lives with his grandmother (Edwige Blondiau), a healer-magnetizer who performs her small batch of miracles every day. The patients who parade through the house are the only attractions of the young man, who tries his hand at magnetism, while dreaming of writing songs. One day a father and his daughter, Elsa (Lou Lampros), arrive and make no secret of their arrival: a strange stain is spreading on the back of the young woman, who does not take long to become a gentle silver gray coat. Aouuuuuhhhhh!

Lucas Delangle deploys a rare lightness, and a welcome second degree, to touch on a multitude of tracks

From there, dear readers, a thousand bifurcations await you, at the bend of the stone mountains. Is this girl human, or the reincarnation of a wild beast? A boy, were he madly seduced by her feline beauty, can he reasonably approach her? Should it be protected from those who seek to eliminate it?

Born in 1987, assistant director to Claire Simon – on The wood of which dreams are made (released in 2016) –, script on Romain Laguna’s first magnetic feature, Meteorites (released in 2019), Lucas Delangle deploys a rare lightness, and a welcome second degree, to touch on a multitude of tracks, the attraction for magic, the return of the wolf, the reinvention of love. As one blows on a dandelion plume, everything flies away and goes off in other directions, from the staircase of the house to the sheep’s paths, somewhere between rural romanticism and horror film.

Co-written with Olivier Strauss, the screenplay is a veritable trunk of stories, a chest full of books, plunging into the roots of a thousand-year-old world, to draw from it a story for today, and a few winks or homages to the contemporary cinema. We are of course thinking of Alain Guiraudie – Stay upright (2016) – and Lucas Delangle also mentions Happy as Lazzaro (2018), by Alice Rohrwacher, for the dreamy and naive side of the character.

Jacky and Elsa are looking for each other, like storybook heroes who have long since left the old picture book, and have had time to grasp the contemporary world. Jacky, the apprentice magnetizer, looks in perplexity at his hands which speak to us of impotence. The pair of actors engage in a remarkable game of approach and flight, choreographic. Already spotted in The French Dispatch (2021), by Wes Anderson, in the series Irma Vepby Olivier Assayas, or in my night, by Antoinette Boulat, Lou (garou) Lampros has the look that kills. Just enough of a shift for you to believe in all this cinema.

You have 2.9% of this article left to read. The following is for subscribers only.

“Jacky Caillou”: diving into a trunk of stories, with werewolf and magic tricks