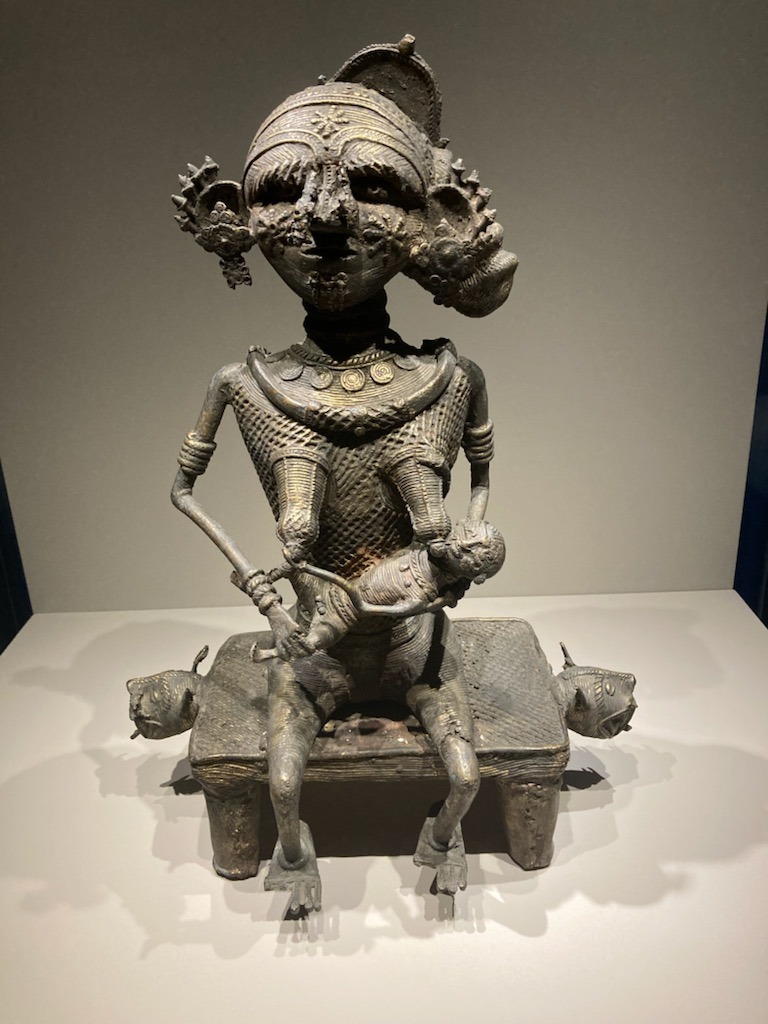 “Through the three indigenous religions that we present to you, namely Hinduism, Jainism and Buddhism, it is a rich and diverse canvas of India that we wanted to show you” explains Laura Giuliano straight away.

The exhibition begins on the ground floor with an immersion in the immense and ancestral country. Portraits of Indian men and women, maps of India, shimmering fabrics, images projected on the walls of deities, typical music, the smell of incense. The public is immediately immersed in the atmosphere.

On the first floor, he will deepen his knowledge by crossing the door of a temple. Each religion has its own color: blue in reference to Shiva for Hinduism, red for Jainism, yellow for Buddhism.

Each time, the exhibition offers a comparison between scholarly art, that found in temples, and rural art, that found in remote villages. This bias reveals the way in which the people appropriate their deities, Shiva, Vishnu and Devi. Example in Mitila where women sculpted these goddesses in bronze.

“Look at this statuette which is supposed to symbolize fertility” points out the Italian curator. “We see a woman nursing her child but her face is fierce and she is seated on a throne in the shape of a tiger. She is there to remind us that female deities are not always benevolent. They are in the image of nature”.

Further on, it is Jina which opens its doors to the public, the one which gave its name to a religion less known to Westerners and yet very present in India: Jainism, the religion of non-violence.

“Jina is the winner” says Laura Giuliano. “He is the one who came out enlightened after taking the path of Samsara, the rite that leads from death to rebirth”.

Indeed Jainism believes in reincarnation. For this religion, every being has a soul, whether it is a human or an animal. His soul can be reborn and bring forth its light again. Any violence against him is therefore an offense to the gods. Buddhism also shares this theory of karma and the cycle of life.

During the five months of the exhibition, highlights will take place, starting with a Diwali celebration organized within the castle grounds on October 22.

“It’s the flagship festival of Indians and Indians” says Malini Ranganathan, artistic director of the Bindi association in Nantes and cultural ambassador of India in France. “Diwali is the festival of lights. One illuminates one’s house to chase away ignorance. For some traders, it’s a new year that begins.

Yoga classes will be offered from November 10 to 24. A conference on “India, textile workshop of the world” will be held on November 14. And of course guided tours and fun workshops for children will be organised.

The castle of the Dukes of Brittany in Nantes has even planned sensory visits for the visually impaired. In short the exhibition “India, reflections of the sacred world” is within everyone’s reach.