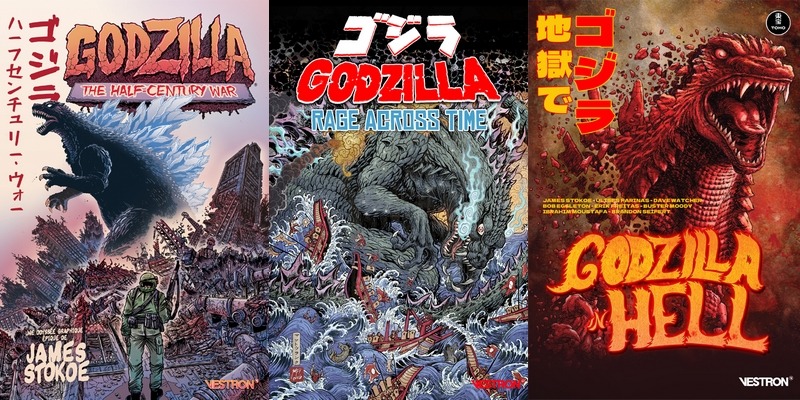 Comics at Journal du Japon? No, you’re not dreaming. Usually, we don’t talk about it but… On the occasion of the release of Godzilla: The Half-Century War in June by Vestron, it’s the perfect time to see that our kaijū favorite inspires authors and illustrators in new adventures while paying homage to the different films. Today, it will not be a comic strip but three, namely: Godzilla: Rage Across Time, Godzilla in Hell and Godzilla: The Half-Century War.

Godzilla through the ages!

Godzilla: Rage Across Time brings together 5 stories, each of which we will detail. 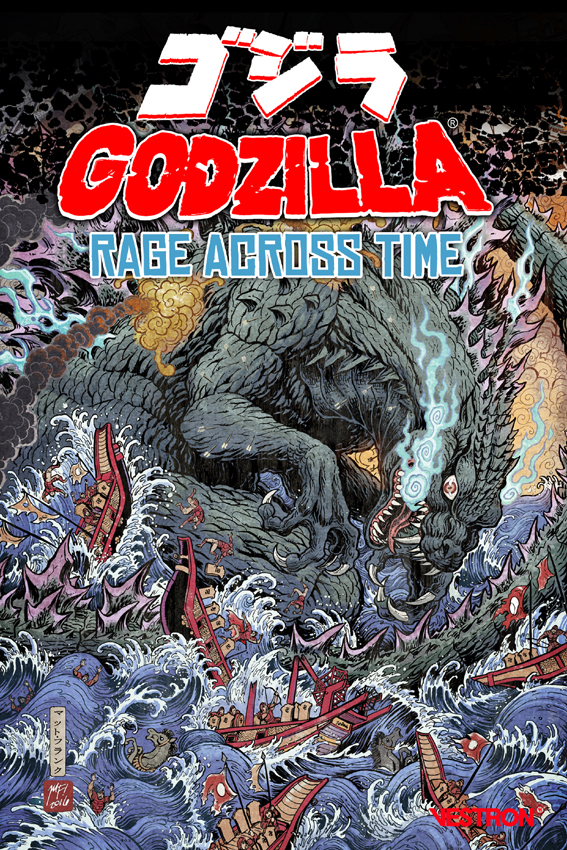 Mongol invasion stopped: what if Godzilla was the famous Kamikaze?

The first story takes place in Japan, in 1274 during the first Mongol invasion attempt. Kublai Khan, the conqueror of China sent his mighty army to Japan. 900 Mongol ships with 40,000 soldiers on board arrive on Japanese shores. Leading the invading fleet is the ruthless Zhenjin Khan, the dragon master who controls two ancient monsters, gigantic and Megalon. Akio, a warrior woman and the samurai of the Suda clan will have to cooperate for the salvation of Japan. The screenwriter, Jeremy Robinson, cleverly manages in 20 pages to rewrite Japanese history by showing how Godzilla could have stopped the Mongol invasion. On the path of the two heroes, the author does not hesitate to draw on Japanese mythology with the dragon Yamata no Orochi and the famous crabs heikeganireincarnation of the spirit of the Taira warriors who fell in the battle of Dan-no-Ura from the epic The Tale of the Heike. Awakened from his sleep, Gojira is truly the god of destruction. His radioactive breath overcomes Orochi who was supposed to save the world. In desperation, Akio unleashes a fire arrow to anger Godzilla and lure him into Hakata Bay. And the clash of titans can thus take place… The sublime illustration by Matt Frank is also the one that was chosen for the cover and we understand why!

The second story by Chris Mowry and Kahlil Schweitzer takes us from Japan to ancient Greece. From the top of Mount Olympus, Zeus ignores mortals and their problems. Godzilla wiped out two warring factions at sea. Poseidon investigates and discovers this rampaging creature. The god of the seas fails and the city is overwhelmed by the waters. The ruler of Olympus summons the Hydra and the gods of Olympus fight. Ares, Aphrodite, Hephaestus, Hera… Zeus uses his last strength to stop the destructive demon… Is Godzilla unique or is it a species?

Ryan Ferrier (story and screenplay) with drawings by Hugo Petrus and colors by Jay Fotos transports us to the England of Edward III in 1348 where the Black Death rages in the kingdom. The King sends his knights to hunt the dragon, “a monstrous force that infects and infests all that treads these lands”. Monsters attack the crusaders and the “angel” Mothra appears and may well be the cure for the wave of “Black Death” that is sweeping England and Europe. Godzilla won’t be there this time, but the giant butterfly fight is still fun, even if less spectacular.

The last two stories are less compelling than the first three. For the fourth story, which takes us back to 218 BC, screenwriters Ulises Farinas and Erik Freitas explore time and show how Godzilla could have played a role in the war between Hannibal and Rome. Pablo Tunica’s drawings are clearly successful but the story remains mixed compared to previous stories. The final grade is even more disappointing unfortunately. Prehistory with dinosaurs cohabiting with humans is almost a succession of boxes where dinosaurs and monsters clash in chaos (the reader is also a little lost)…

As for Godzilla: Rage Across Timeit’s about 5 stories that show what happens when Godzilla dies and ends up in Hell… James Stokoe leads the way with a king of the monsters who falls into the Underworld and breaks everything, even the letters announcing that you have to “give up[|er] all hope, [à ceux] who enters[ent] in the underworld. Bob Eggleton’s drawings for the second story in a style that stands out from the comics is quite particular and spoils the fights with the emblematic enemies of Godzilla, Rodan, Anguirus, Varan and even King Ghidorah! Big heart for the third part signed Ulises Farinas and Erick Freitas for the script, Buster Moody for the drawings and Ludwig Laguna Olimba as color assistant. In addition to Godzilla’s brilliant confrontation with SpaceGodzilla, we are treated to a fight of good and evil where in the end, Godzilla does not choose any side and appears to be neither good nor bad, just an emanation of nature… The 4th story is more classic with a king of destruction at work in the middle of the “city” against King Ghidorah (him again) and a new enemy, Destoroyah from the 1995 film. We also find Godzilla’s son, Minya. The 5th and last part is not breathtaking but Dave Wachter’s illustration is sublime and is also used on the cover of Godzilla in Hell !

Unlike the previous two comics, Godzilla: Rage Across Time and Godzilla in Hell, Godzilla: The Half-Century War is written and drawn by one person, James Stokoe. This is a rather long story, thus allowing for the development of a more consistent scenario. In this album of 128 color pages, we follow the adventures of a Japanese soldier, Lieutenant Ota Murakami, on the hunt for the king of monsters since his appearance in Japan in 1954. By joining the AMF (the anti-megalosaurus force ), the officer did not know how far it would take him: a 50-year odyssey! Godzilla won’t just wreak havoc in town. He faces heads that we know well like: Anguirus, Rodan, Megalon, Kumonga, Mothra, Ebirah, Hedorah, Battra, King Gidorah… Mechagodzilla is also in the game and will help Godzilla against SpaceGodzilla! It’s clearly an homage to the Godzilla movie series and even without seeing all the movies, readers can relate to the story. It might even make you want to see the cinematic origins of all the kaijū met.

With these 3 albums of stories around Godzilla and giant monsters, VESTRON allows the French to discover new adventures that will be appreciated by fans of kaijū eiga but also people who are not necessarily knowledgeable about Godzilla and his “friends”.

More information on the godzilla collection at VESTRON on their official website.

[Comics] Godzilla crosses the ages and even Hell! – Literature