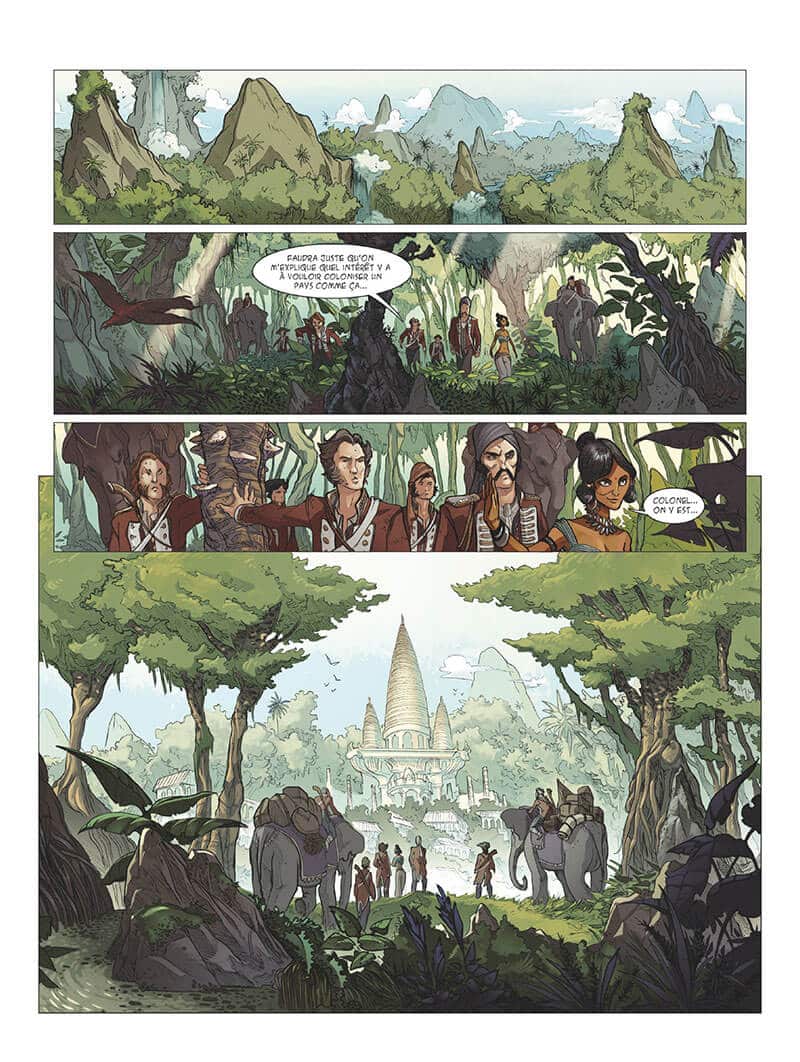 Album one-shot with a very successful cover, Arjuna immediately takes on Hindi accents with its ostentatious oriental graphics. And it is moreover bluntly that this story with its somewhat unbridled aspects begins: in an India colonized by the English, Arjuna is tasked with using all her powers to repatriate the daughter of a British colonel to the United Kingdom. This is where things get tough and force the mercenary to show the extent of her powers: pirates and local deities will stand in their way in epic battles!

Mathieu Mariolle offers an uninhibited scenario that favors action and adventure for the benefit of a sustained, not to say explosive, pace! A trip in the company of Indian deities who have some surprises in store. The typical line drawing of Laurence Baldetti fits the story perfectly. We really appreciate the result.

Arjuna is therefore a very good entertainment which we are not really used to and that’s good!

Excerpt from the comic: The prophecy must be fulfilled. India, 19th century. While the English occupier seeks at all costs to secularize this country with multiple beliefs and divinities, the local population fears the arrival of a child who could well be the reincarnation of the powerful demon Ravana. In this context, the native Arjuna, a beautiful young woman who places her singular powers at the disposal of the highest bidder, is tasked with bringing the cheeky daughter of a British colonel back to the United Kingdom. But their maritime journey will lead the two women into the lair of the separatist pirates led by Commander Kanhoji. An unexpected revelation will then seal their fate. Could it be that this young English girl is carrying the dreaded child within her womb? Soon, Arjuna, Kanhoji and an excommunicated priest will form a united group around the same cause: to protect the mother and give this child a chance to live. Then begins a long road strewn with pitfalls through colonial India… Mathieu Mariolle on the screenplay (Nautilus, La Voie du Saber, Far Cry…) and Laurence Baldetti on the drawing (La Quête d’Ewilan…) revisit folklore and fantastic Indian bestiary over a bewitching fresco with flamboyant decorations, rich in spectacular adventures, titanic fights and unbridled suspense!