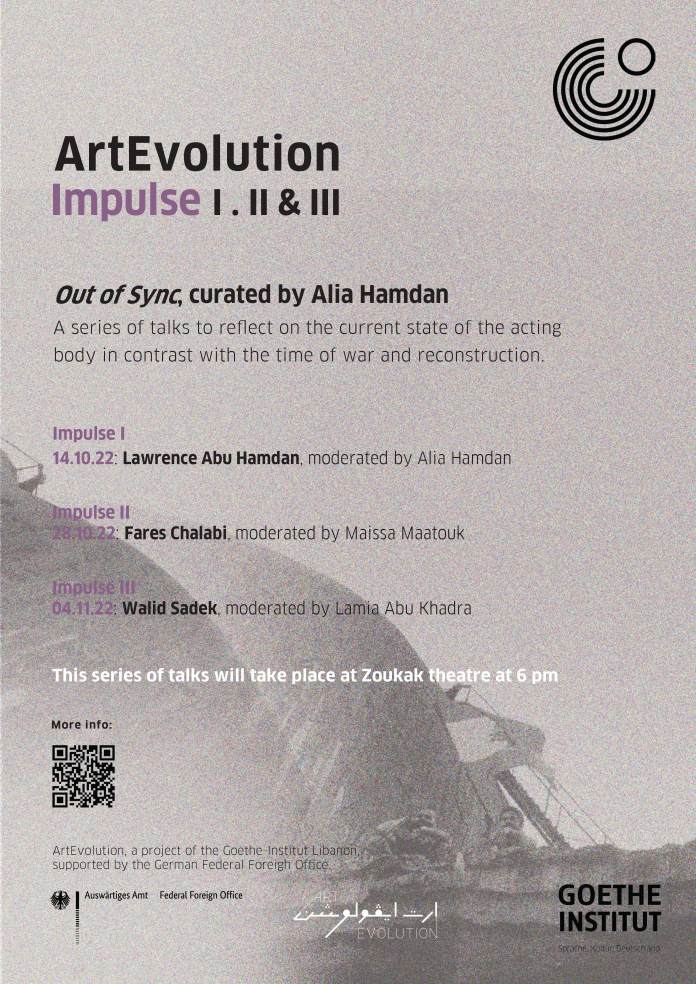 Out of Sync, the series of conferences organized by Alia Hamdanis an invitation to reflect on the current state of the body in action, in contrast to previous periods, those of war and reconstruction.

These lectures address the conceptualization of what it means to act in sectarian regimes, the ways in which the body registers the effects of war and collapse, but also aims to contribute in a transversal way to a reflection on the performing arts, to a when the aesthetic political conditions for producing art in Lebanon are changing.

This lecture series will take place at Zoukak Fridays from 6 p.m. to 8 p.m.followed by a cocktail.

IMPULSE I
Friday, October 14, 2022, at 6 p.m.: conference of Lawrence Abu Hamdanmoderated by the curator Alia Hamdan

Alia Hamdan (b. 1979) is a performance practitioner and scholar of aesthetic politics and dance and performance theory.
Her research interests revolve around the Deleuzian semiotics of the image, choreographic modes of thought and politics. Since 2013, she has been teaching art theory and art history courses at universities such as ALBA (Lebanese Academy of Fine Arts), LAU (Lebanese American University) and USJ ( Saint-Joseph University) and occasionally produces performance projects such as Someday (BIPOD, Beirut, 2012).

This year, she was in residence at the Camargo Foundation (Cassis, France), and will soon be in residence for research and writing at Schloss Solitude (Stuttgart, Germany).

”Natq” an audiovisual essay on politics and the possibilities of reincarnation.

Through attentive listening to “xenoglossy” (the impossible speech of reincarnated subjects), this performance explores a set of lives that use reincarnation to negotiate their condition on the threshold of the law, people for whom injustices and violence escaped history due to colonial subjugation, corruption, rural lawlessness and legal amnesty. In the play, reincarnation is not a question of belief but a proposal for a new category of witnesses.

Lawrence Abu Hamdan (born 1985) testified as an expert witness before the UK Asylum and Immigration Tribunal. Her investigative work has contributed to high-impact advocacy campaigns, including conducting earwitness interviews of inmates at Saydnaya prison for Amnesty International’s Human Slaughterhouse report.

He obtained his doctorate in 2017 at Goldsmiths, London and in 2021 obtained a chair at the University of Chicago and the Johannes Gutenberg University of Mainz where he developed his research AirPressure.info

He has exhibited his work in several galleries and Biennials (Sydney, Venice, Gwanju, Sharjah), and is part of major collections (MoMA, Guggenheim, Center Pompidou etc…).

This conference aims to explore how action is conceived in the Lebanese context.
It will therefore first present the conceptions of action, in order to grasp the specificities of the sectarian way of acting. Second, the presentation will show how, in the sectarian context, we have witnessed a number of phases in which action, and its manifestations in film and the performing arts, evolved.

The objective is to produce a conception of action specific to the Lebanese context in order to contribute to artistic production in order to resist the dominant and hegemonic global culture and its way of configuring our way of acting and performing.

He continued his philosophy studies at Paris 8 where he obtained a Master 2 in 2008, and his doctorate in 2017.

Chalabi taught philosophy and theory of art at the American University of Beirut (AUB), Saint Joseph University (USJ) and the Lebanese Academy of Fine Arts (ALBA) between 2012 and 2021. Today, he lives and teaches in Bordeaux.

His main fields of interest are: the study of ontological argumentation, ethics and aesthetics – in line with the Deleuzian approach.

Maissa Maatouk (born in 1992) is an artist who lives and works in Beirut.
Often taking the form of videos, her work seeks aesthetic strategies to overcome the neutralizing effect of sectarian power on the body, which is generated by local and regional power structures.

Filming becomes a means of acting in the state of suspension to generate time and space outside the power structure that generates it. She graduated with a Bachelor (2014) and a Master (2017) in Product and Global Design from the Lebanese Academy of Fine Arts and was a 2019-2020 scholarship holder of the Ashkal Alwan Home Workspace Program.

Currently, she works as a studio assistant and production manager with artists in Beirut while developing her own projects.

“I would like to take a step back and describe, while theorizing, the figure of the non-posthumous survivor who lives in the conditions of a prolonged post-war period to ask himself what remains of it in the time after, the time after the time of the post-war period and to concentrate on an urgent question:

What a figure, and what a body, when history is apprehended as a horrible mise-en-abîme. »

Walid Sadek (b. 1966) is an artist, writer and professor at AUB. His early work is an attempt to assess the lingering family legacies of the Lebanese civil war. It then suggests ways to understand the complexity of persistent civil conflict in times of relative social and economic stability. His subsequent work, between 2006 and 2016, offers a theory for a post-war society reluctant to return to normative life. In recent years, sensing a fundamental socio-political and intellectual change in the country, he decided to conclude his post-war work which until then had tackled living conditions in a “prolonged now” and began to theorize the living conditions in a time after the time of the post-war period, where memories of war are reduced to numbers that can no longer constitute a common history.

American-Palestinian based in Beirut.

Her practice explores how disasters can resurrect and generate new forms of perception, collectivity and resistance, using the Palestinian and Lebanese contexts as microcosms of emergency.

Abu Khadra graduated from the University of Minnesota with a BFA in Interdisciplinary Art in 2018. She is a Fellow of Ashkal Alwan’s Home Workspace Program in Beirut as well as a resident of the Jan van Eyck Academy 2021-2022 in Maastricht.

ArtEvolution is a project of the Goethe-Institut Libanon, supported by the German Foreign Office

If you have found a typo or typo, please let us know by highlighting the text in question and pressing Ctrl+Enter . This feature is only available on a computer.