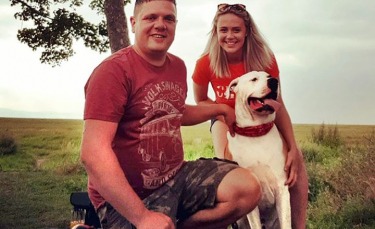 
Marc Mountford and Katie Morran are used to exploring the world with Cooper, their beloved Mastiff, aboard their converted truck named The Mystery Machine in reference to the adventures of Scooby-Doo. The couple was far from imagining that their dog would become the reincarnation of the emblematic character of the cartoon.

Mark and Katie are from Wirral in Britain. Spouses regularly travel across the country in motorhomes with their friendly dog. For the fourth time since Cooper share their lives, they traveled to the pretty town of Llangollen, which is less than an hour’s drive from their home.

Passing in front of an old butcher’s shop, Cooper was systematically seized with immense terror. “He always panics in front of the same store”, confirmed Mark to Mirror. Dangerous behavior ensued: “It’s the first time he’s dragged me down the street – when a 70 kilogram Mastiff starts pulling, it’s almost impossible to stop him. This attitude is unusual at Cooper. He’s a lovely dog ​​and we’ve walked past many other butcher shops with no problem – especially if we’re going for a bone”added the master.

Indeed, his imposing canine towed him on the road so that the duo almost ended up under the wheels of a moving bus. Passers-by were shocked. After that, the dog remained shaking for a long time, its tail between its legs. “When he was younger he was easier to control, but now that he’s grown up it’s different”added Mark. 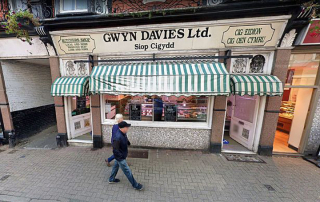 The butcher’s shop, located on the avenue Castle Streetwas held by Gwyn Davies, a man much appreciated by his clients until his retirement. At the time, the establishment had a slaughterhouse in the back of the shop. In addition, old photos prove that animal carcasses were hung outside the butcher’s shop. “Rows and rows of sheep, cows and chickens, before Gwyn took care of them”testified a local resident.

Some people have then theorized: either the canine is receptive to the lingering smells of blood and feels uncomfortable with the terror of the place, or the ghostly past of the place is very real. Indeed, the librarian next door related strange facts that would have taken place in the butcher’s shop.

Read also: By adopting an obese dog and putting him on a diet, this veterinarian saves his life

No one can therefore say exactly what is going on in the head of Cooper when he walks past this shop. Mark and Katie all simply decided to avoid the city and take the incident with humor: “It’s like in the Scooby-Doo stories, but in real life”.