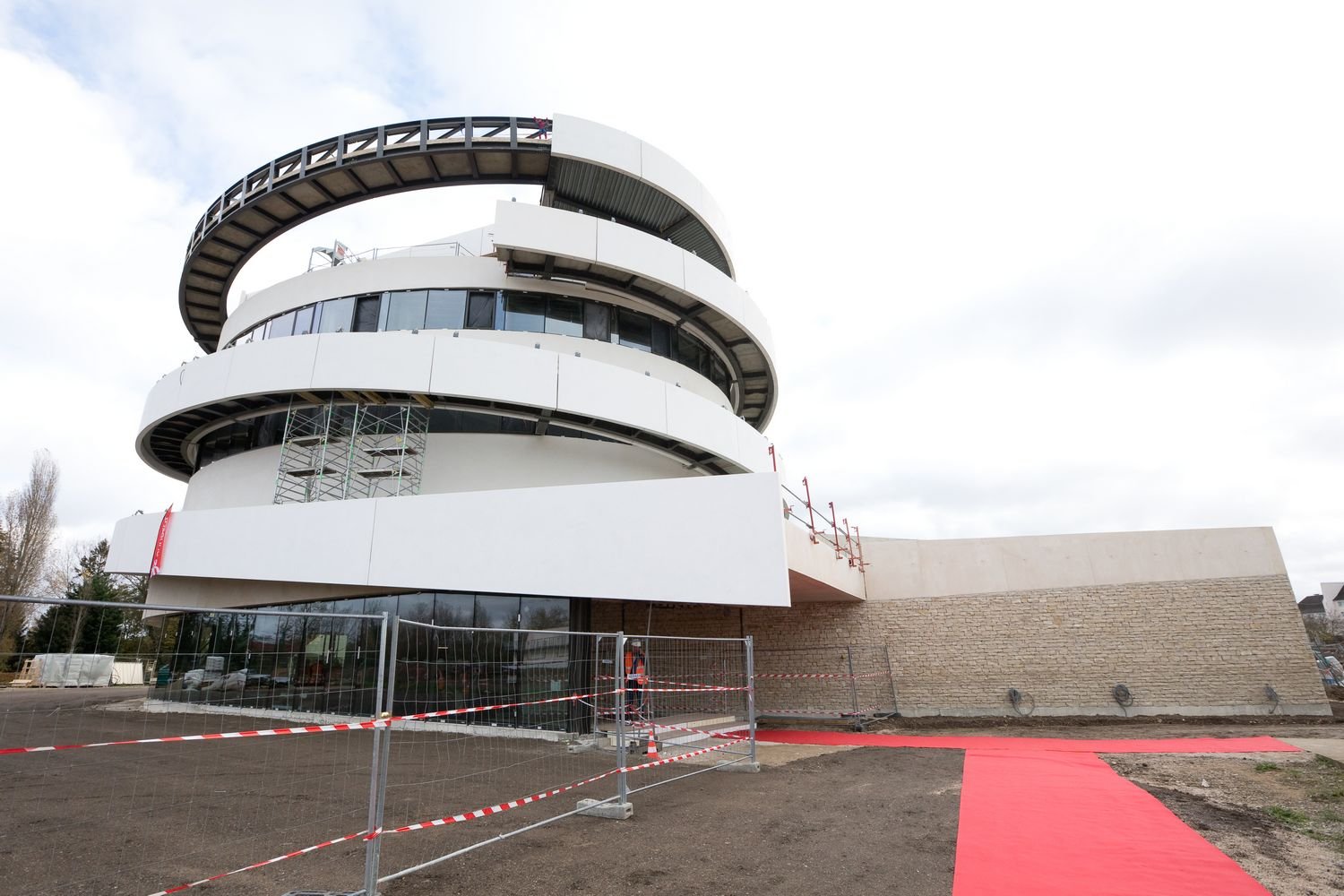 This Tuesday, November 22, Alain Suguenot inaugurated the end of the structural work of the building in the presence of the actor Christophe Lambert. 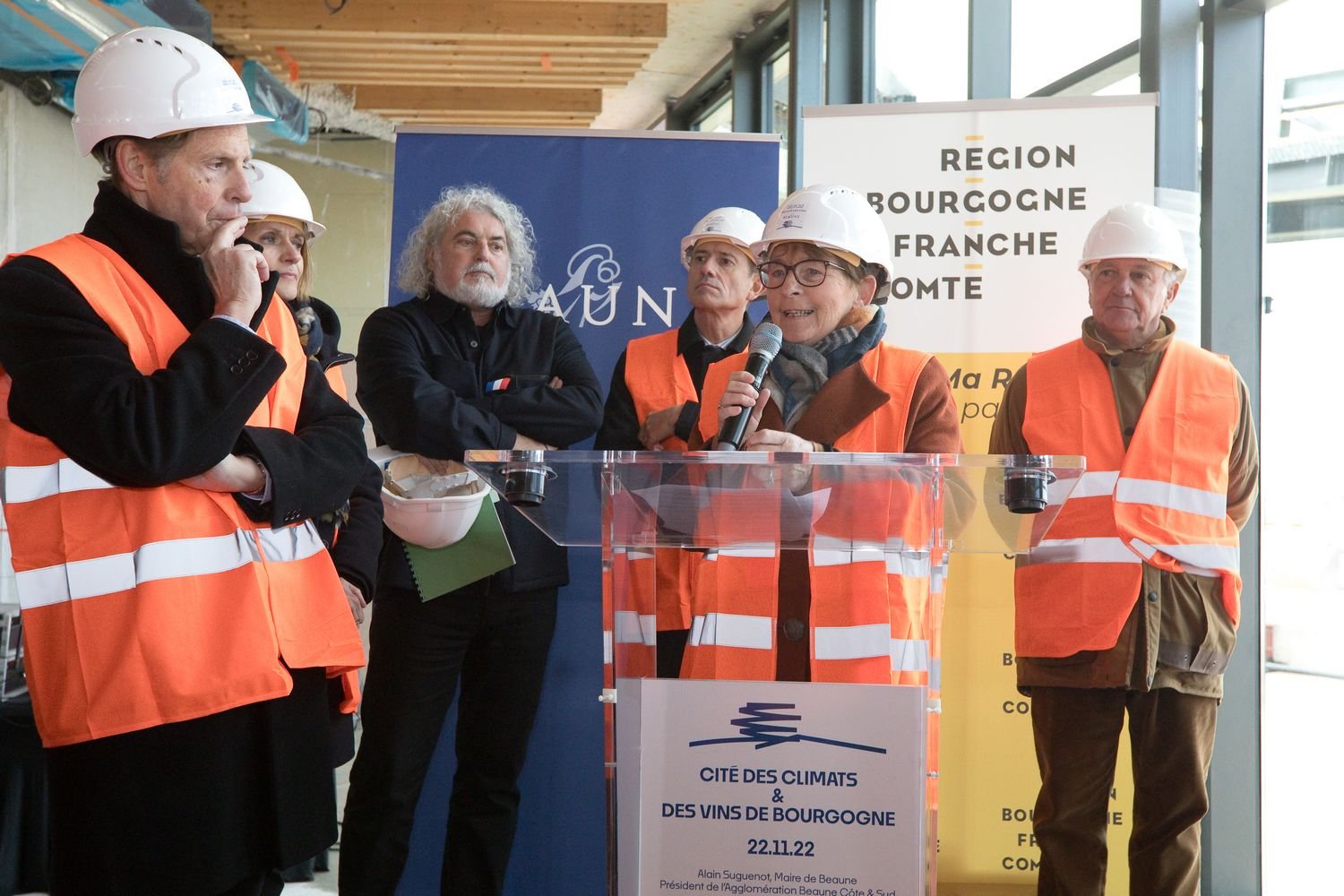 The date is symbolic: November 22, 2022 or 22.11.22 for numerology enthusiasts. A date in the form of a palindrome, which can be read in both directions. However, the arrow of time points to the future and the construction site of the Cité des Climats and Burgundy wines is progressing.

This Tuesday, Alain Suguenot (LR), mayor of Beaune, presided over a ceremony constituting a milestone in the construction of cultural facilities: the inauguration of the end of the structural work and the end of the great spin in the presence of representatives funders as well as the prefect of the Côte-d’Or.

The equipment represents an investment of 13.5 million euros, financed by the City of Beaune, the regional council of Bourgogne-Franche-Comté, the departmental council of Côte-d’Or, and the Bureau interprofessionnel des vins de Burgundy (BIVB). The City will be the owner, the BIVB the operator.

The company Rougeot is agent for the realization of the building site mobilizing many Burgundian companies. The building was designed by the architect Emmanuelle Andreani, from the Siz’ix agency. The scenography is by Clarisse Garcia from the Alice dans les Villes agency.

In addition to the structural work, the exterior wall in Comblanchien stone is nearing completion, the small tendril ramp also being well advanced.

The whole is an allegory of the vine, as Emmanuelle Andreani explains: “this little piece of vegetation allows the vine to hang on and grow to give Burgundy wine, and which, over time, becomes as hard as of stone. It was the idea of ​​this building which comes to roll up, which comes to seek the sky after having found its roots in the ground”.

“We wanted this building to represent Burgundy, to be anchored in its territory and above all to be authentic”, summarizes the architect who insists on the use of wood and hemp concrete, biosourced materials. Four vines will be planted on the roof. The building achieves E3C1 energy performance, an intermediate level between RT 2012 and RE 2020.

At 24 meters high, the terrace accessible by the ramp, allows you to contemplate the vines of the Côte de Beaune and the Côte de Nuits as well as the plain.

“The vine finds its roots very deeply in our soil, in our terroir, in the heart of our climates, so we have a duty towards it and the symbol it represents, for nature, for our entire planet. and for the generations to come”, indicates in turn Alain Suguenot, under the gaze in particular of Marie-Claire Bonnet-Vallet (LCOP), representing the Department.

“This duty is also the heritage that has been transmitted to us since the Romans and then by the monks since the end of the 9th century, more precisely since the 12th century with an acceleration due to the Cistercians”, continues the mayor.

“The biocity of Beaune wines will be an open door to our vineyards so that all those who cross it can follow its initiatory journey in our villages, in our fields, on our hillsides and join its two daughters, beyond our small homeland in the south of the Côte-d’Or, that is to say in Mâcon and Chablis”, he underlines.

“An exceptional wine, an exceptional monument”, enthuses Marie-Guite Dufay (PS), “the building imposes itself by its grace, its elegance and almost also by its discretion”.

“It refers to what we absolutely must promote because it is the very essence of our wines and the products of our region. (…) That’s what tourists expect, it’s authenticity, charm, refinement, ”says the president of the Burgundy-Franche-Comté regional council.

The president then underlines the contribution of the wine sector to “the economic greatness” of Burgundy-Franche-Comté and recalls the issues linked to climate change.

“This quality must be accompanied by an ecological responsibility”, assures the president, “we have here an arch-responsible building, it is a reason for very great satisfaction”.

With the three facilities of the Cité des Climats and Burgundy wines network in Beaune, Chablis and Mâcon, with the International City of Gastronomy and Wine in Dijon, with the Maison des Vins du Jura, with the Maison du Comté, with the Tour du Pouilly-Fumé and with the abbey of Pontigny the president intends to create a network of the territory capable of “capturing tourists”.

“It’s a building open to the vineyard”, observes François Labet, president of the BIVB, from the fourth level of the building. “It’s a building that perfectly meets the primary intention of the network of Burgundy wine and climate cities: to send curious visitors back to our hillsides and make them want Burgundy. The visitor will come to understand the cultural depth of local viticulture, the most successful expression of which is expressed in the climats of the Burgundy vineyard.

The sites of the network of wine cities will open on March 25 in Mâcon, on April 1 in Chablis and therefore on May 13 in Beaune.

After paying tribute to Emmanuelle Andreanni and Alain Suguenot, Christophe Rougeot encourages us to “go further” and signal his “commitment to decarbonizing the coast”.

While the interprofession envisages greenhouse gas emission-neutral viticulture by 2035, the builder proposes to create in 2023 an endowment foundation that can raise 50 million euros over ten years in order to extend this carbon neutrality. to the 40 municipalities concerned by the registration of the climates of the Burgundy vineyard, including in the field of mobility

“When you replace ‘decarbonize’ with ‘disarm’, you have disarmed the planet. This is the most beautiful message of peace that can be made here. It is also the City of Peace”, he says with emotion.

For his part, the prefect of the Côte-d’Or salutes the sector’s commitment to reducing greenhouse gas emissions as well as the “boldness” presiding over the creation of the network of wine cities.

“We can say to those who carried out this project that, obviously, you were bold, obviously, you were not afraid to manage to build such a building, the wine is obviously good and to succeed in such an achievement, you had to be reckless”, declares to applause Franck Robine, in reference to the Dukes of Burgundy Philippe le Hardi, Jean sans Peur, Philippe le Bon and Charles le Téméraire, having in common to have mobilized the wine at the service of the “diplomatic influence” of the territory.

The representative of the State thus reconnects with the tradition of witticisms through a twist that bluffs Alain Suguenot himself.

Inauguration of the complete district in November 2023

The Cité des Climats and Bourgogne wines takes place in a new district which will be planted with more than 400 trees over eight hectares. The mayor of Beaune aims to make it an exhibition space for monumental contemporary works of art. A green corridor will join the Parc de la Bouzaize, a river whose banks will be redeveloped.

This area will include hotels and restaurants. A hotel is under construction, the one whose actor Christophe Lambert – present at the inauguration – is one of the investors with Michel Halimi within the Sirius group, as well as an event hall able to accommodate 1,200 guests and a commercial wine tourism.

The inauguration of this new district is scheduled for the Hospices de Beaune wine sale in November 2023.

A new carpooling area near the A6 in Beaune

BEAUNE: Last straight line for the City of Climats and Burgundy wines


Check out our social media profiles and also other related pageshttps://nimblespirit.com/related-pages/