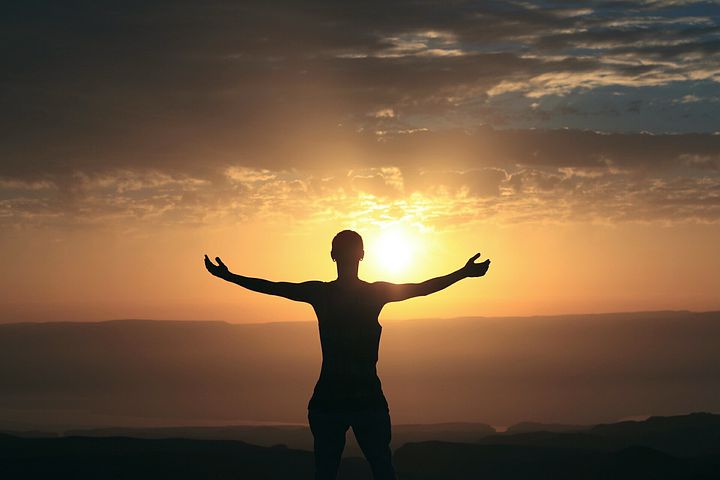 It is not the neighboring sanctuary of Sainte-Anne-d’Auray which attracts crowds, this Friday September 9 in Morbihan, but the dark granite mansion of a private individual. In an already crowded adjoining barn, 250 people began praying the Rosary. The congregation – mostly female, of varying ages and backgrounds – resembles that of any Marian shrine.

Outside, the latecomers crowd in front of a white plastic table where one registers his coordinates, and indicates if one wishes to receive the scapular of the Alliance, this original medallion given during the ceremony of entry into the community. Some 2,700 people have already received it since the mid-2010s. “Today it will not be possibleexplains a woman to a disappointed small group. Our referent bishop, Mgr Marc Aillet (Bishop of Bayonne, editor’s note) asked that applicants no longer receive it directly. They must first meet an Alliance priest. »

The group that meets at the end of the afternoon, on the sidelines of a Marian procession – the Troménie de Marie – founded by one of its members, is called the Alliance of United Hearts. “Concretely, it’s just a community of people who meet in small groups to pray”, explains Ivan Noailles, retired policeman and member of the Alliance, met in Sainte-Anne-d’Auray. Its raison d’être: to disseminate the revelations of a 61-year-old mystic, “Virginia”, whose real name is Gaëtane de Lacoste Lareymondie (Virginie is her middle name).

“It’s Jeanne who tells you that”

“You don’t have someone special in front of you”, begins, in the barn, this blond woman with a soft face, who says that the Lord has spoken to her regularly and given her visions since 1994. “It is quite simply something that I handed over to the Church, through the intermediary of Mgr Aillet in particular, and of my spiritual father, who is also the chaplain of the Alliance, Father Marie-Philippe (Thurotte) » (1), from the Saint-Jean community.

Eloquent, the mystical describes the bloody face of Jesus that she says she saw on the altar of the church of Domrémy-la-Pucelle (Vosges): “One of his eyelids was completely pierced by an 8 cm needle. » She quotes, seething, what Joan of Arc would have confided to her during a mass in Vendée. “Do you realize that Jeanne is telling you that! Does that bother you a bit? »

His conference mixes advice for personal development (the importance of smiling, ” do not say “I’m useless “because we were created by God”) and more political, monarchist messages, with an emphasis on sacrifice and martyrdom. ” I do not I’m not a bird of misfortune, but time flies…”warns, in Sainte-Anne-d’Auray, this mother of five children, who affirms that Christ recently asked her to go to Madame Island, in Charente-Maritime. “I said to the Lord: ‘Are you sending me to entrust the Church of France to priests who died during the Vendée wars? But what does that mean? Are we going to have a Revolution in reverse?” Jesus answers me: “My child, there will be other Vendées”. That’s all I know. »

At the exit of the barn, the discussion engages with Virginie. “You are welcome but I prefer that there is no article on us…” The 2,700 faithful who received the scapular are divided into “80 prayer groups for the Church and France”, specifies only the mystical. They are nicknamed “rosebuds”. But who are “the roses”, these people that several sources describe as the core of the Alliance? “The roses are between 15 and 20, but I won’t give you their names, Virginia replies. They are only people who wish to invest themselves in society with Christian values. There is nothing communal. »

Several priests and faithful interviewed by The cross describe the Alliance as a parallel Church evolving in the greatest discretion, under the radar of the parishes. The “group of roses” has something of a secret society all the same. Indeed, the roses, which were originally only 13, are described in the first volume of Virginia’s book, The King’s Secrets as “the inverse or the ‘contrary counterpart’ of a Masonic world order”.“Jesus shows me that 13 roses is no coincidence to this day…, she writes. Jesus shows me a triangle that looks like a pyramid: there are 13 black balls. They are the almighty in our world today. I get that they too have made a pact, but with darkness. »

Roses are closely linked to the conservative Catholic right. Among the members that The cross was able to identify, there is the co-founder of the Manif pour tous Béatrice Bourges and Caroline de Villiers, daughter of Philippe de Villiers, who regularly lends to the association the ring attributed to Joan of Arc recently acquired at auction by his father. Contacted, the two women confirm having “consecrated to the united holy hearts of Jesus and Mary”.

In communication with the dead

To fully understand the birth of roses, you have to go back to the early 1990s. Gaëtane de Lacoste Lareymondie did not yet call herself “Virginia”. The 30-something is a journalist. She notably carries out interviews and reports for a magazine of spirituality, Christians magazine, for which she surveys the places of presumed miracles, Garges-les-Gonesse (Val-d’Oise) in Tournai (Belgium), and met many “visionaries” such as Francine Bériault (who calls herself “the girl of yes to Jesus”), Myrna Nazzour or Mirella Pizzioli, an Italian who claims a “charism of communion of saints”and makes her enter into communication with the dead.

In 1992, Virginie took off on a pilgrimage to Medjugorje (Bosnia-Herzegovina) where she met a certain Christine, who would play a major role in the founding of the Alliance. Before her death at the end of the 2000s, this dentist indeed asked Virginie and a few friends to help Martine L. (2), another clairvoyant, to transcribe and publish the messages she would receive from Christ.

A group is therefore created around this hairdresser from Reims (Marne). We share his writings. We transcribe them. Several books (The King chosen by God, Only love will save the third millennium, volumes 1, 2 and 3) are published by Éditions Resiac. In Martine, Christ would have announced since the year 2000 that after “great world events”the descendants of the Bourbons and the Capetians will return to govern France.

The group very quickly refocused around Virginie, who testified for the first time publicly to her visions in 2008 in Orléans. We find there the same monarchist references as with Martine. “Christ is the head. And we know what happened in France when they started beheading. When you cut off your head, death ensues.”declared for example Virginie in Sainte-Anne-d’Auray.

At the beginning of the 2010s, roses scoured the churches and Marian shrines. The revelations of Virginie multiply, and meetings are organized in Versailles, in the Var or in Reims, with a view to their publication. “It was these messages from Heaven that brought me back to the Church,” testify to The cross Sylvie de Corta, one of the first roses, and more particularly in charge of transcribing the messages. “Everything Virginie says, we feel that she really lived it. » In 2012, the first volume of Secrets of the King is published. The group adopts an act of consecration “to the two united holy hearts of Jesus and Mary”, repeated every morning. A chain of perpetual prayer is organized, each member having his ” watch tower “also called “pink day”.

On April 19, 2014, the statutes of the Alliance of United Hearts association were filed with the sub-prefecture of Bayonne (Pyrénées-Atlantiques). Three sources indicate to The cross that it was also at this time that Virginie would have “received from Christ” the request to write to the bishop of the diocese, Mgr Aillet. “I agreed to accompany the Alliance pastorally while always saying that I cannot prejudge the authenticity of the revelations”explains the latter to The cross.

In recent years, bishops have expressed their reservations, leading the Bishop of Bayonne to ask Virginie to put her conferences on hold. Testimonials from former members of the Alliance – The cross was able to consult them and meet several authors – arrived at the cell of sectarian aberrations in Catholic communities, from March. The criticisms addressed – “grip”, “manipulation of minds”, “impossibility to leave the group of roses freely” – led the person in charge of the cell, Mgr Jean-Luc Brunin, to alert Mgr Aillet. “There is no evidence to conclude that there are any problems,” declares the latter to The cross. The Bishop of Bayonne affirms that nothing in the messages of Virginie contradicts “with faith or morals”.

“Today I no longer believe in it”, says Father Antoine Coelho, former spiritual father of Virginie between 2012 and 2013. “It is not for me to judge the veracity of messages supposedly received from Heaven. It’s up to the Church. That said, on these complex spiritual questions, I invite all the faithful to exercise great caution., ends this priest who joined the diocese of Toulon, where he founded in 2017 a fraternity, the House of the Holy Spirit. Like him, several priests and bishops contacted by The cross believe that a serious canonical investigation should be carried out.

“A black ball at the head of the Church”

In The King’s Secrets Virginie explains that the mother of Jesus was conceived “in the bosom of the Father”before the beginning of the world. “Mary’s breast milk is of divine spiritual substance because she is the spouse of the Holy Spirit”, still describes mysticism. This woman who has been married since 1980 also presents herself as ” the widow “ Where “the wife” of Christ. The latter, she says, would have kissed her on the mouth during an appearance.

Another questionable point concerns Pope Francis. Virginie never says he is an apostate, but she bears witness to the vision, a week after her election in 2013, “of a black ball at the head of the Church”. “I ask the Lord to enlighten me on these Luciferian infiltrations…”she wrote later.

Most of the rosebuds encountered in Sainte-Anne-d’Auray say they keep a certain perspective on these messages. “There is great respect for everyone’s freedom”assures a young Parisian magistrate who received in 2019 the scapular from the hands of Bishop Aillet, in Bayonne. “The Alliance is bearing fruit. There are beautiful bonds of solidarity between us. And you know, we are in communion with the Church and Pope Francis. » A few days after the Sainte-Anne-d’Auray conference, Breton members of the Alliance went so far as to mention, during a meeting, “Satan’s Angels” that would inspire the successor of Benedict XVI.

“Elected officials who hope to save France and the Church”

“Virginia shows off a lot, which is already a crippling criterion. I don’t see a guiding line in his words – except a royalist political program. She advocates the return to the Christian kingdom, to the France of Joan of Arc. This is part of a pseudo-mystical and occult chain that dates back to the 19th century.e century, in the image of false visionaries like the Breton Marie-Julie Jahenny (1850-1941).

This “alliance” goes against the unity of the ecclesial body by rekindling passions and nostalgia. It falls into the non-theological, around a use of the title of “Mary co-redemptrix” which can go as far as a deification of the Virgin. The socio-political situation in France is a breeding ground for this phenomenon, in a traditional environment in opposition to Pope Francis. Those who adhere to it consider themselves to be the chosen ones, the small remnant of the faithful who hope to save France and the Church. »

Virginie, the seer and the mysterious Alliance of United Hearts