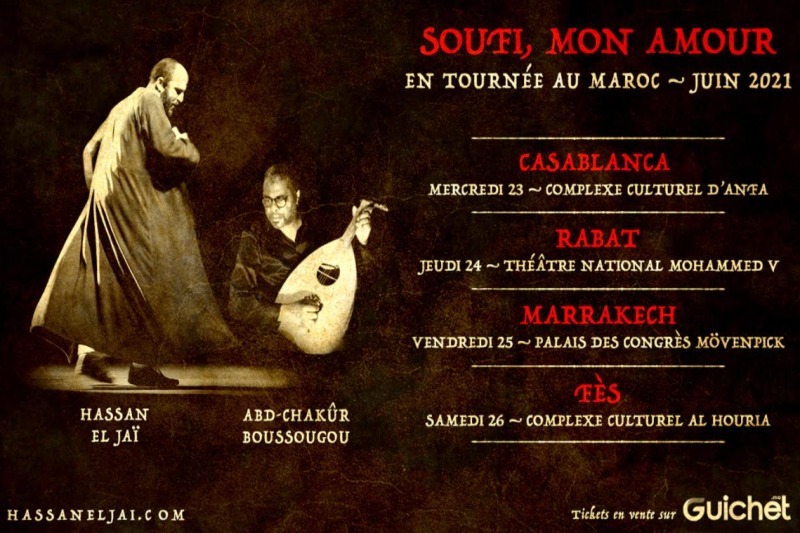 After a hundred performances in Morocco and abroad, Hassan El Jaï returns accompanied by the musician Abd-Chakûr Boussougou on several traditional instruments.

We follow the journey of Shams of Tabriz, the famous wandering dervish of the 13th century, towards the city of Konya. In the footsteps of Rumi’s spiritual master, and through his encounters with various fascinating protagonists; the public is invited to follow an initiatory path, at the end of which love reveals itself to be both the reason and the ultimate goal.

Contacted by Hespress UKHassan El Jai talks about his return to the stage, his meeting with the musician Abd-Chakûr Boussougou and his relationship with Sufism.

You go back on stage after more than a year of absence following the coronavirus crisis, do you fear the reunion with the Moroccan public?

Apprehending is not the word. I would rather say that I can’t wait to get back on stage; and what is more in the service of a show that goes in search of an unveiling of the spiritual wisdoms in each of us: namely the questioning of the truth – al-Haqîqa, in its Sufi and Gnostic dimension.

You will be accompanied by the instrumentalist Abd-Chakûr Boussougou, how did the collaboration come about?

Abd-Chakûr is a musician of incredible sensitivity; he plays about fifteen instruments, and offers compositions speaking of our time with a softness assumed but never smoothed.

I met Abd-Chakûr in Nice in December 2018 – he had come to attend my performance of SOUFI, MON AMOUR at the Center Universitaire Méditerranéen on the Promenade des Anglais. We quickly became friends and wanted to merge our artistic universes. To start, we prepared a show on the SOUFI TALES OF ‘ATTAR & RÛMI that we shot in Morocco and France in 2019. Then the desire to revisit my theatrical adaptation of Shams Tabrîzi’s journey followed, as an evidence.

How was the encounter with the novel “Sufi, my love?” And your admiration for Sufism?

I discovered this novel in Morocco, at the end of 2014. Many people who knew my love and my fascination for Sufism recommended it to me, so I ended up reading it. As I already knew certain texts by Rumi well, and also the story of his meeting with Shams, I adapted them for the stage fairly quickly. A month or two later, I played it for the first time at the Villa des Arts in Casablanca.

As for Sufism, I had discovered it several years earlier in Paris, during my course at Cours Florent. Discovering the poems and writings of Ibn-Arabi, Rumi, Al-Ghazali and many other masters has been one of the greatest enchantments of my life.

What assessment do you draw, as an artist, from this white year triggered by the pandemic?

At first, I took a lot of distance from everything that was said in the media, to preserve my inner balance. I took the opportunity to read a lot and refine my discipline on a daily basis. And as a coach, as I have accompanied many people and groups over the past year in public speaking, but also in stress management and team building; I was able to observe the devastating effects of constant fear and anxiety on individuals. This allowed me to strengthen the mastery of my abilities, without losing sight of what is most essential to me in life. I think that each ordeal we go through, however painful it may be, is first and foremost an opportunity to grow and gain in humility. Thus, today I feel an even greater joy and lightness, at the simple idea of ​​going back on stage to transmit great universal wisdom.

“Sufi, my love”: Hassan El Jai, between mystical journey and return to the stage