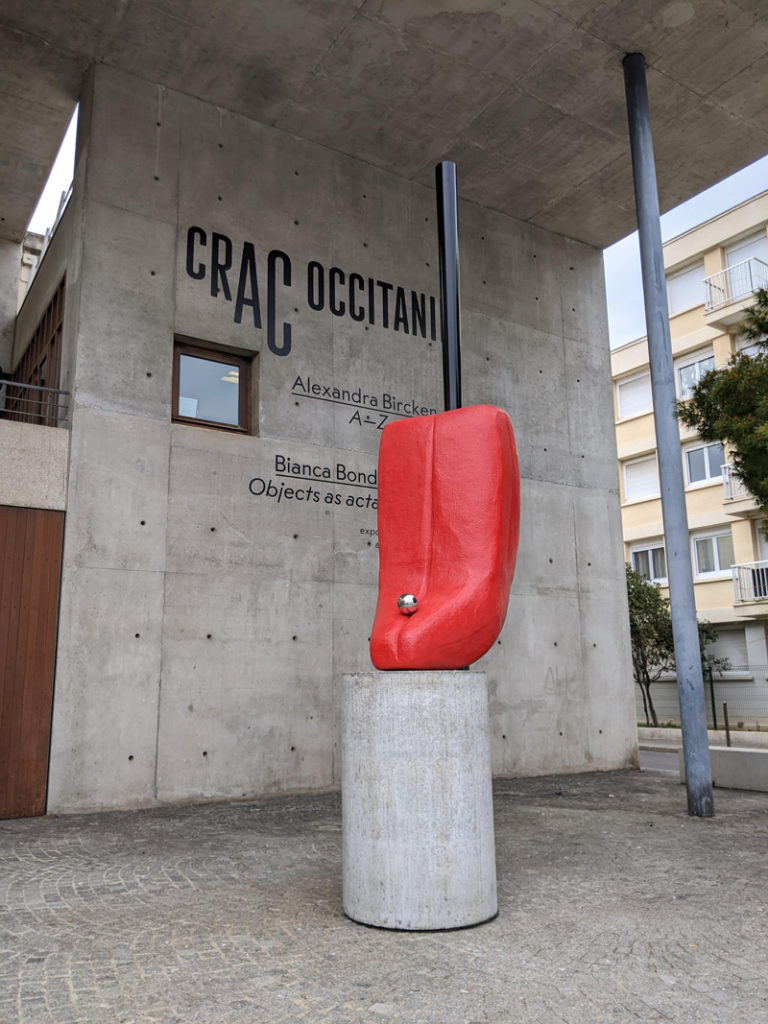 This spring, the Crac Occitanie presents the work of two female artists: Alexandra Bircken and Bianca Bondi. With diametrically opposed formal results, the two artists are interested in the human, in the body and in the spirit.

On the ground floor, therefore, some sixty works present a panorama of the last twenty years of Alexandra Bircken’s creation. Conceived with the Museum Brandhorst in Munich, the exhibition is a repertoire of forms and themes approached by the artist. Alexandra Bircken was born in 1967 in Germany and trained at Central Saint Martins College in London in the prestigious fashion section. Until the early 2000s she worked as a fashion designer for her own brand, then her creations gradually turned towards sculpture. But even as a sculptor, the body remains at the center of her work.

The body is omnipresent, explicitly as with Origin of the world where we see the placenta that Alexandra Bircken kept from childbirth, or suggested in the form it gives to technological objects such as the motorcycle cut in two from RSV 4. Here, the body is vulnerable, modifiable, extendable. The skins are multiple: the skin so fragile, the clothing made of woven fibers or the skins of other animals and the architecture, carapace and cocoon. Each of these layers protects and puts the outside at a distance, and allows you to modify the volume that you give to your body, your identity that you present to the world.

The notions of armor and prosthesis are regularly explored as so many extensions and technical augmentations of the body. We note here that Alexandra Bircken seems to operate according to a principle of oppositions. The vulnerability of the body responds to the power of armor and weapons (cut as for an anatomical board, and therefore inoperative), to technology and mechanics responds weaving, a primordial act allowing the creation of clothing, baskets or fishing nets. , and with the toys of childhood, it associates those of adult sexuality.

If at first glance the work of Alexandra Bircken seems to be composed of groups of works unrelated to each other, we discover that in reality everything is connected. At the center of a network of concentric circles is the body, inhabiting its different more or less intimate skins, each connected to the other by a semi-organic, semi-technological mesh, the whole forming the multi-material weave that is the individual.

The exhibition Objects as actants by Bianca Bondi is the result of a three-week residency at the Cité scolaire Paul Valéry in Sète. As she trained middle and high school students in the process of producing an exhibition, looking for the objects to use to create the works, she opened herself up to the history of the city, its atmosphere, its nature, its archaeology. And from the bottom of the canals of Sète appeared objects lost in the mud, abandoned, damaged, like dirty vestiges of a contemporary city.

After washing and purifying them with salt water, Bianca Bondi assembles the fragments, crystallizes them with city water and adds plants used in the divinatory arts or rituals, such as fern or amaranth. She thus creates a kind of runic alphabet, hybrid between the terrestrial and the aquatic, sparkling with crystals and carrying within them esotericism and mythology. His installation made of a large light and fluffy fishing net has also been washed of its impurities, but its fluffy cocoon appearance is deceptive, its pinkish color coming from the blood of the fish caught in its mesh.

Bianca Bondi’s objects are not frozen works. The chemical reactions that she sets up between salt, copper, water and other organic or mineral materials make her “living still lifes” evolve towards colors and shapes that are not entirely predictable, in a transfer of energy between materials. If the original piece is doomed to disappear, it is to make way for a recomposed version decided by the elements that form it. A very poetic way to remind us of the transience of everything.

With these two artists, Alexandra Bircken and Bianca Bondi, the Crac once again pushes us to question ourselves about our body and our mind, to protect and cultivate them. Proof that art, even in forms as opposite as those of the two artists, can take care of us.

Skin and mystique of Alexandra Bircken and Bianca Bondi – Toutaculture