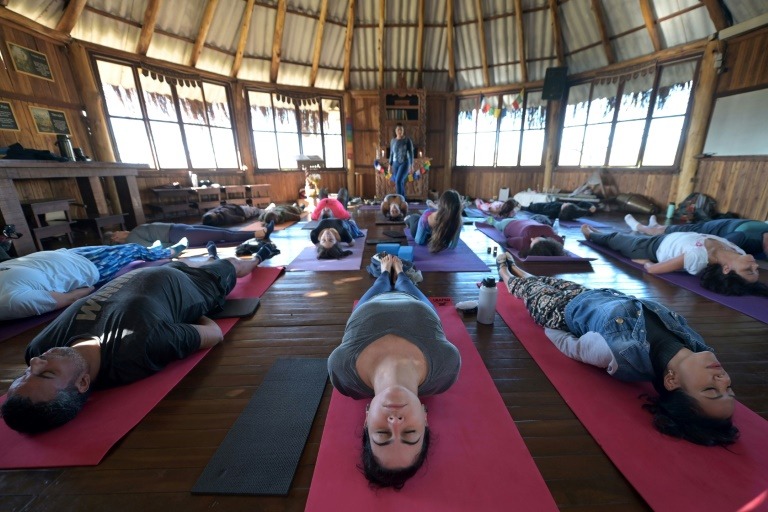 Eyes closed, bodies coated in a layer of greyish clay mud, a dozen tourists in bathing suits stamp their feet to the rhythm of the drum, in the middle of the luxuriant vegetation of the Chapada dos Veadeiros, 230 km from Brasília.

“It’s the energy of mother earth!” exclaims Michelle Ximenes, who leads this “shamanic clay healing ritual”. Smiling in her ample black and white poncho, she sings incantations while beating on her drum decorated with esoteric motifs.

His spiritual retreats have been full since the end of the Covid-19 pandemic, which killed more than 670,000 people in Brazil.

Before, she organized one every two months. Now, retreats take place twice a month at his center, where visitors are also treated to yoga, meditation, and ritual dances at night around a campfire.

“People are looking for a connection with the divine after going through difficult times. It’s a quest for inner happiness,” she explains.

For this, nothing like the Chapada dos Veadeiros, a 240,000 hectare nature reserve nestled on a high plateau at 1,200 meters above sea level, in the Brazilian state of Goias (center).

The emerald green of the Cerrado, Brazil’s bushy savannah, is barred by a rocky fault that reveals natural pools of crystal clear water and spectacular waterfalls.

“The energy of this place is different. The atmosphere is really special, we can work on our connection with the spiritual world”, says Juliana Abdala, 34, one of the participants in the retreat.

Protected area recognized by Unesco, with thousands of species of fauna and flora threatened with extinction, the Chapada dos Veadeiros also has a mystical aura that fascinates lovers of esotericism.

The turning point came in the 1980s, when a photo taken from space by Nasa led some to believe that the subsoil of the region was made up of a huge slab of quartz crystal that would give off positive energies. .

A belief since undermined by scientists, but still alive in the collective imagination.

The Chapada is also located on the fourteenth parallel, the same as the ruins of Machu Picchu, in Peru, an archaeological site also endowed with an immense spiritual aura.

Some residents of Alto Paraiso even claim to have seen extraterrestrials, and businesses in the town play on this reputation by decorating their windows with drawings of little green men.

In another spiritual center, the Paradise of the Pandavas, a name inspired by characters from an epic in Hindu mythology, Carol Cianni teaches visitors the technique of mindfulness meditation.

One of the exercises: suck on a square of dark chocolate for seven minutes, and maintain total concentration to fight against the feeling of anxiety.

“The goal is not just to savor chocolate. You have to savor life,” she explains.

During the pandemic, “many people stayed at home and realized that they were anxious. In fact, they already were, but were not aware of it”.

Karla Moreno, a 40-year-old civil servant who lives in Goiania, 400 km from Alto Paraiso, decided to go on a spiritual retreat with her husband after losing her father during the pandemic.

“It’s a moment of introspection, to look at myself from the inside and get to know myself better,” she says.

In Brazil, the boom of mystical retreats in a nature reserve – Teller Report