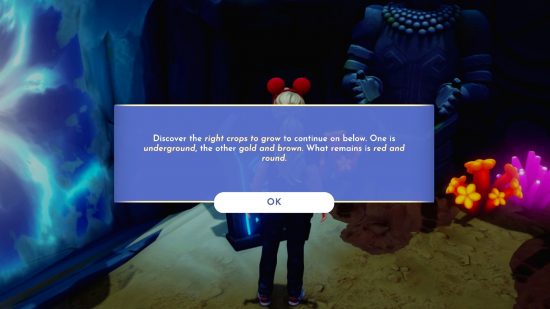 Wondering how to solve the Disney Dreamlight Valley Mystical Cave riddles on Dazzle Beach? Disney’s life sim follows in the footsteps of Animal Crossing, Stardew Valley, and other farming sims by asking you to gather materials, build, and craft. However, the Disney game also forces you to channel Trust, Friendship, Power, and other traits as you unlock new areas and meet new friends. In order to locate the Power Orb and free Ursula from a cursed cavern, you must solve three puzzles and reach the bottom of the mystical beach cave.

Among your very first challenges in Disney Dreamlight Valley, Merlin will help you unlock Dazzle Beach. After accessing the beach, your first stop is a small cursed cave in which Ursula is trapped. The Sea Witch tells you about the mystical cave, which hides the orb of power needed to rebuild the beach pillar and free Ursula from dark magic.

How to Solve All Mystical Cave Puzzles in Dreamlight Valley

As you descend the cave, you will come across a series of locked doors surrounded by statues. In the middle of each set of statues is a riddle. You need to find the right items to give to the statues, in order to unlock the next door. Here are all the puzzles and what you need to do to solve them:

“Provide the gem that best matches to continue your hero’s quest. »

All you have to do here is feed a gem to each of the stone statues, making sure the color of the gem correctly matches the one on the statue’s chest. With a green, a blue and a red statue, you must collect a peridot, an aquamarine and a garnet respectively.

These gems spawn in the rock formations of the walls around the valley, which can be broken using your magic pickaxe. Some will be obvious, as you will be able to see the colored gem in the rock itself, but make no mistake: gems can drop from any of these large rock deposits, so be sure to break them all. The specific slots you’ll need for these three, however, are:

Once you have one of each gem, return to the mystical cave and offer the correct one to each statue, and you can continue your way to the next puzzle.

The Riddle of the Harvests of the Mystical Cave

“Find out the right crops to grow, to continue below. One is underground, the other gold and brown. What remains is red and round.

Descend further into the cave and you will find another puzzle. It’s slightly more complex than the first, as you have to decipher and find the correct seeds, plant them, and wait for them to sprout before the door opens. The seeds you need are:

You should have plenty of Carrot Seeds, as they can be obtained by destroying Night Thorns, but all three can be purchased from Goofy at one of his stalls. You need to complete some of Scrooge McDuck’s quests to open Goofy’s stalls, and Carrot and Wheat Seeds can both be purchased from his Peaceful Meadow stall. If you’re having trouble finding Tomato Seeds, it might be because you need to unlock Goofy’s stall on Dazzle Beach first. You may even need to upgrade it several times before the Tomato Seeds are available for purchase.

When you have all three types of seeds, return to the mystical cave, plant the seeds in front of the stone statues in any order, water them and wait for them to sprout. You have to wait 25 minutes until the tomatoes are fully developed, but as soon as they are, the next door will open. 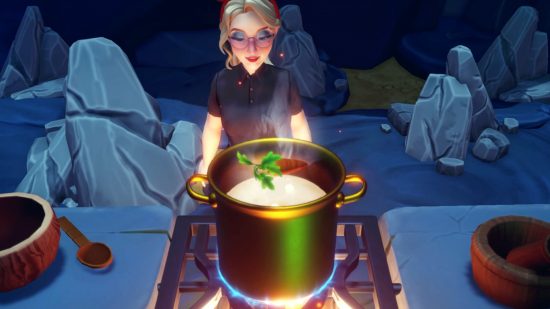 “The final riddle, let it be known: Cook and eat what you have grown. »

The third and final puzzle in Mystical Cave is much shorter and much less complex. You basically only need to cook the three crops from before. Unless you have spares handy, simply harvest your crops from the previous area to ensure you have the ingredients you need. There is a stove in the cave, so you can just place the carrot, wheat, and tomato in the pot, along with a piece of coal ore. If you don’t have it, you can get it by breaking rocks anywhere in the valley.

All three ingredients give the three-star meal Veggie Pasta, and while you don’t need the recipe to cook it, it can be found – along with a few other treasures – hidden away in this area of ​​the cave. Simply dig the sand with your magic shovel and break the rocks with your pickaxe.

According to the riddle, you must also eat your meal to continue, so eat and the final door will open. To eat the meal, press I to open your inventory, select the item, and click “Eat”, restoring your energy in the process.

How to get the Orb of Power

Deep in the mystical cave, you can finally get the Power Orb. It glows in the cave waters, so just pull out your magic fishing rod and snag the item. Bring it to the surface, interact with the Dazzle Beach pillar, and free the shore from the grip of dark magic – you’ll soon see Ursula leaping between the ponds and seas of the valley.

Now that you know how to solve mystical cave puzzles, you can continue to open all areas of Disney’s Dreamlight Valley. We also have a guide on how to upgrade your home in Disney Dreamlight Valley, if you fancy increasing your inventory storage and all the other perks that come with upgrades.