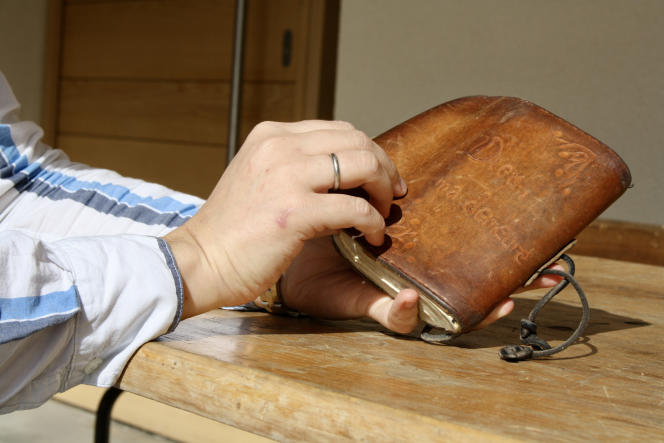 ” Have a nice weekend and don’t forget the essay for Monday! recalls Isabelle P. from the classroom blackboard as she finishes picking up her things. With a brisk step, she crosses the courtyard of her high school in Argenteuil (Val-d’Oise) and passes the gates of the gate. It is only a few blocks from the Saint-Pierre-Saint-Paul church in Colombes (Hauts-de-Seine), but mass begins in three minutes.

With her jeans, her striped shirt and her sneakers, nothing suggests that Isabelle is a consecrated virgin. Her cross is stowed under her clothes and only a fine half-ring, slipped on her right ring finger, discreetly bears witness to her mystical nuptials with God. The 35-year-old has been wearing it for more than four years, ” December 10, 2016 exactly “, she likes to recall.

Since the day of her consecration by the bishop, Isabelle P. has been recognized as a consecrated virgin by the Catholic Church and her love for Christ is proclaimed in the eyes of all. From the outside, nothing has really changed: she continues to exercise her profession as a modern literature teacher, still lives in her apartment in a quiet suburban district of Paris, is free to move, go and come at your convenience. From the inside, she agreed to unite with an invisible husband and renounced a family life.

Neither secular nor religious

Unlike priests or nuns, consecrated virgins do not take vows of obedience, chastity and poverty. Neither secular nor religious, they take a vow of abstinence and continue to live in their ordinary context. They hardly see each other, or even know each other, and share nothing other than the fact of having “married” God. They have no rigid obligations but a mission – to radiate the Christian message at the heart of the reality of the world – and respect, as much as possible, the five daily prayers.

Neither secular nor religious, they take a vow of abstinence and continue to live in their ordinary context.

Isabelle P. never forgets the main ones: morning lauds, evening vespers and compline before going to sleep. She sometimes recites that of the middle of the day while slipping away to mass. ” But that doesn’t happen often because I really like having lunch in the canteen with my colleagues. she smiles. She goes to mass whenever she can, about every other day “.

For consecrated virgins, this time of prayer is a ” face to face with God “, a way of ” to feed ” the relationship. They adapt according to their work. If Claire Dauphin, cardiologist, cannot pray during her shifts, Frédérique Poulet is more assiduous: “ I teach theology at the Collège des Bernardins and there is an oratory where we can pray. Several of us are consecrated virgins among the teachers and students, and we sometimes go to mass together at noon. »

You have 77.65% of this article left to read. The following is for subscribers only.

Catholicism: who are the “consecrated virgins”, mystical spouses of Christ without being religious?