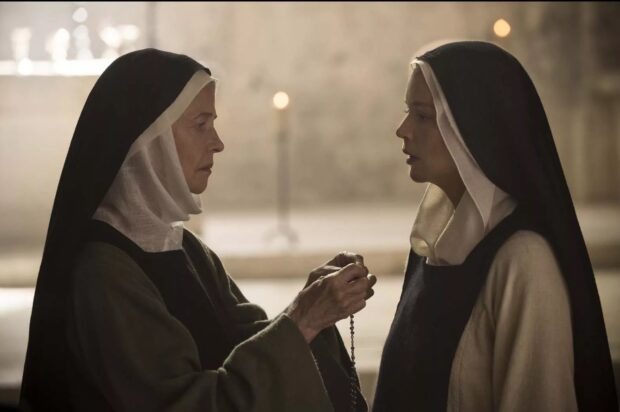 Paul Verhoeven, “the violent Dutchman” as it has been nicknamed, returns to the past full of mysticism and plague to tell us the story of a young girl with burning love. If the subject only stirs up questions already addressed by the cinema and past controversies, the actors and the formal work save the day.

The nuns and their convents have become part of the world cinephilia in a particular current which from time to time adds a stone to its edifice. Among others, among the best known, The nun, that of Rivette in 1966 like that of Nicloux in 2013, adapt the text of Diderot. But also Devilsby Ken Russel, released in 1971, which mixes religion, witchcraft, eroticism and power. Benedettaby Paul Verhoeven, which is currently being released and is part of the Cannes selection, falls into this category.

Paul Verhoeven started from the minutes of a 17th century trial found and published by Judith Brown, that of a nun accused of sapphism. To this alliance of religion and sexuality, Verhoeven adds his favorite themes, power, the hypocrisy of propriety and institutional violence. A film almost behind closed doors, in a convent in Italy at the time, Verhoeven concentrates his questions and gives them a particular sharpness. Provocative (Turkish Delightshis first major international success in 1973, or flesh and blood, in 1985, describing a barbaric and violent Middle Ages), he was throughout his life. It borders on blasphemy here, a particularly topical subject. A dildo carved in a small sculpture of the Virgin is still a beautiful provocation. The very intimate rapprochements of Benedetta and Christ, yet on the cross, are no less so. Even if basically our era is less sensitive to such images than in 1971, when the Devils of Ken Russel, for example, which had caused a real scandal.

Physically, Verhoeven calls a spade a spade. But on the side of spirituality, of belief in God, cats are less obvious. Throughout the film, we do not know if Benedetta believes, plays, simulates, manipulates. Does she really have powers? The abbess and the nuncio cannot really decide. Power has always denied ambiguity, and takes refuge behind its strength, and therefore represses. What Verhoeven denounces. He, on the contrary, questions, he does not decide, does not indicate anything clearly about what is happening with this very beautiful and very religious young woman. He gives milestones in his journey (mystical child, adult turned towards his neighbour, innocence of his faith, deep pleasure in his sexual practices). But does she really believe in her powers or is she mentally deranged? The director fortunately lets doubt hang over, using it as an engine to move the story forward, like the suspense in a thriller.

Carried by great actors, this very classic film in its style, with a magnificent photo, has its assets. Virginie Efira is the first. Of an unvarnished beauty, as usual, she manages daring scenes without going astray. And manages to blow hot and cold, the complex and the immediate with effective force. Her face conveys, with very little effect, the inner tensions that run through her character. Let’s hope that Cannes is sensitive to it… Charlotte Rampling like Lambert Wilson are, as we know, great actors and participate in the success of the film.

Who shows by his discrepancy that religious questions have for several decades taken on a very different color, much more identity. Benedetta still belongs to the questions of the 20th century, which sought to understand the mechanisms of faith. None of the new data regarding religions today are present. The question of faith, of its nature and of all that derives from it, is today totally outdated. Verhoeven’s provocation seems more a game than a controversy. This does not detract from the pleasure of cinema.

Screenplay: Paul Verhoeven and David Birke, based on the novel by Judith Brown