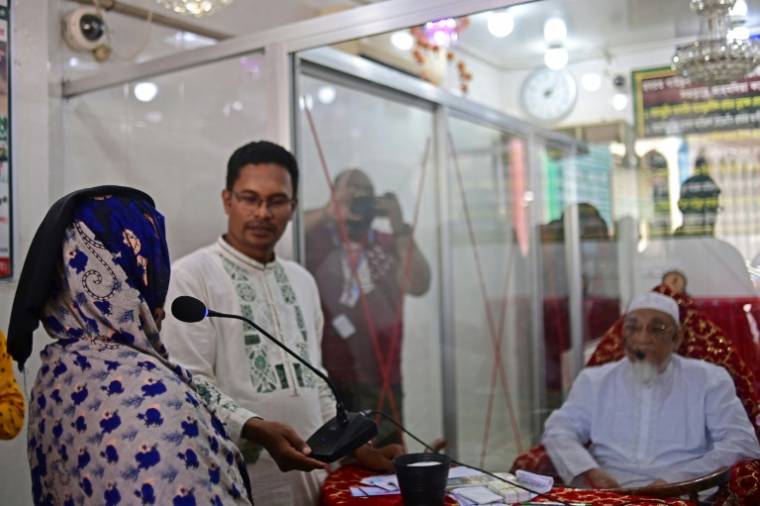 A woman (l) describes the symptoms she is feeling to the mystic Syed Emdadul Hoque (d), May 14, 2022 Maizbhandar, Bangladesh (AFP / Munir uz ZAMAN)

When families tormented by evil spirits seek him out for protection, Bangladeshi mystic Syed Emdadul Hoque knows his prayers alone won’t be enough to appease them.

Mr. Hoque conducts exorcisms. But at the same time it contributes to breaking taboos on mental health in this South Asian country, where possession and the supernatural are often invoked to explain mental disorders.

Hundreds of people consult the respected cleric every week to overcome their demons.

They receive Mr. Hoque’s blessing, then a team of experts tactfully judge whether psychiatric care is necessary.

Rakib, 22, was taken to the shrine after complaining of “possession by a genie” which led to alarming changes in his behavior.

“When I become conscious again, I feel good,” he told Mr. Hoque.

His uncle explains, however, that the student suffers from worrying dissociative disorders, attacking and harassing his relatives in an unrecognizable language.

“Don’t worry, you’ll be fine,” Mr. Hoque reassures him, reciting prayers that are supposed to release Rakib from this spirit and help him focus on his studies.

The possessed is then brought into a room by Irfanul, the cleric’s son, where volunteers note his symptoms and medical history.

“We think he suffers from mental problems,” Irfanul told AFP. “Once we have taken his details, we will send him to a psychiatrist who will prescribe him medication.”

Mr. Hoque, 85, and his son are followers of the Sufi tradition, a branch of Islam that values ​​mysticism and the spiritual dimensions of faith.

People line up to consult the mystic Syed Emdadul Hoque, on May 14, 2022 in Maizbhandar, Bangladesh (AFP / Munir uz ZAMAN)

They are descended from one of the country’s most respected Sufi leaders, from whom Mr. Hoque inherited the prestigious title of “Pir” which defines him as a spiritual mentor.

Their hometown of Maizbhandar is one of Bangladesh’s most popular pilgrimage sites. Every year, gigantic crowds go to the shrines erected for the ancestors of the Hoque family to seek their blessing.

Their faith holds an ambiguous place in Bangladesh, where Sufis are regularly accused of heretics and deviants by hardliners within the Sunni Muslim majority.

Nevertheless, Sufi mystics have a deeply rooted healing role in rural society. According to Irfanul, his father gives his visitors the opportunity to break free.

“When they share their anxieties and problems with us, it becomes easier for us to help them,” he says. “My father fulfills his role by blessing them, and then the medical therapy begins.”

Irfanul, the son of cleric Syed Emdadul Hoque, during an interview with AFP on May 14, 2022 in Maizbhandar, Bangladesh (AFP/Munir uz ZAMAN)

Mr. Hoque is assisted by Taslima Chowdhury, a psychiatrist from the city of Chittagong.

“If he hadn’t sent the patients to me, they might never have seen a qualified psychiatrist in their lives,” she told AFP.

“Thanks to him, many mentally ill people receive early treatment and many are cured quickly.”

Although Bangladesh has experienced strong economic growth over the past decade, access to treatment for panic attacks, anxiety and other mental disorders remains limited.

And this while the bloody war of independence of 1971 as well as the floods, cyclones and other disasters which descend regularly on this country have generated widespread and persistent trauma, according to a study by the British Journal of Psychology published last year. .

People line up to consult the mystic Syed Emdadul Hoque, on May 14, 2022 in Maizbhandar, Bangladesh (AFP / Munir uz ZAMAN)

According to the same publication, Bangladesh has fewer than 300 psychiatrists for a population of 170 million. The stigma of mental illness often prevents those affected from seeking help.

According to a 2018 survey by local health authorities, almost one in five adults in Bangladesh had a mental disorder, but 90% of them were not receiving any professional treatment.

Experts say Mr. Hoque’s program could become a revolutionary way to lift the veil of silence around mental health, and encourage more people to seek treatment from doctors.

“It’s remarkable, given that in Bangladesh mental problems are considered taboo,” said Kamal Uddin Chowdhury, professor of clinical psychology at the University of Dhaka.

The country’s main psychiatric hospital has started a project to train other religious leaders in rural towns to follow Mr. Hoque’s approach.

“These are the front line responders,” says Chowdhury. “If they get the message across that mental illnesses are curable and that being ‘possessed by a genius’ is a kind of mental illness, that can make a big difference in treatment.”